The Chinle is a geologic formation that is spread across the U.S. states of northern Arizona, Nevada, Utah, western New Mexico, and western Colorado. The Chinle is controversially considered to be synonymous to the Dockum Group in eastern Colorado, eastern New Mexico, southwestern Kansas, the Oklahoma panhandle, and western Texas. The Chinle is sometimes colloquially used as a geologic formation within the Dockum in New Mexico and occasionally in Texas. Part of the Colorado Plateau, the Basin and Range, and the southern section of the Interior Plains, this formation was laid down in the Late Triassic.[1]

A probable separate depositional basin within the Chinle is found in northwestern Colorado and northeastern Utah. In the southern portion of the Chinle, it reaches a maximum thickness of a little over 520 m. Typically, the Chinle rests unconformably on the Moenkopi Formation.

There is no designated type locality for this formation. It was named for Chinle Valley in Apache County, Arizona by Gregory in 1917 (he first used the name two years before but did not indicate a wish to officially name it). Members were first assigned by Robeck in 1956 and Stewart in 1957. An overview was created by Poole and Stewart in 1964. Sikich revised the unit and assigned more members assigned in 1965. The areal extent of the unit was mapped by Wilson and Stewart in 1967. In 1972 the areal limits were modified and an overview created by Stewart and others (they published a revision the same year). Kelley assigned more members and revised the unit in 1972. Lucas and Hayden did the same thing in 1989. The Rock Point Member was assigned by Dubiel in 1989.[2] The Chinle was raised to group status by Lucas in 1993,[3] thus also raising many of the members to formation status. He also included the formations of the Dockum Group of eastern New Mexico and west Texas within the "Chinle Group" . This modified nomenclature is controversial; many still retain the Chinle as a formation and separate out the Dockum Group (e.g., USGS). It should be pointed out that the Dockum was named in 1890, before the Chinle. If Lucus is correct, his "Chinle Group" should be named the Dockum Group due to stratigraphic nomenclature rules. Overviews of the Chinle were created by Dubiel and others (1992) and Hintze and Axen (1995).[4] 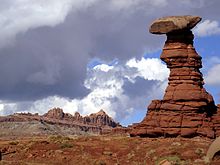 Hoodoo within the Chinle Formation, west of Moab, Utah, along the Chicken Corners off-road trail. Ridge in background is part of the Wingate Sandstone.

Age correlation based on Lucas' Land Vertebrate Faunachrons. The faunachrons are based on first and last appearances of phytosaurs. Simplified stratigraphy based on Litwin.[6]

Formation rank (alphabetical - several members not recognized by the USGS):[1] 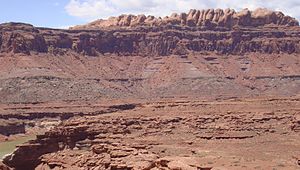