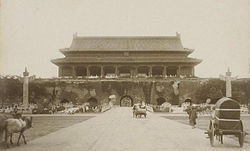 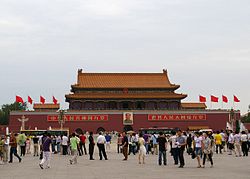 The gate was originally named Chengtianmen (simplified Chinese: 承天门; traditional Chinese: 承天門; pinyin: Chéngtiānmén), or "Gate of Accepting Heavenly Mandate", and it has been destroyed and rebuilt several times. The original building was first constructed in 1420 and was based on a gate of an imperial building in Nanjing with the same name and hence inherited the name Chengtianmen. The gate was damaged by lightning in July, 1457, and was completely burnt down. In 1465, Chenghua Emperor ordered Zi Gui (自圭), the minister of Engineering Ministry to rebuild the gate, and the design was changed from the original paifang form to the gatehouse that is seen today. It suffered another blow in the war at the end of Ming Dynasty - in 1644 the gate was burnt down by rebels led by Li Zicheng. Following the establishment of the Qing Dynasty and the Manchu conquest of China proper, the gate was once again rebuilt, beginning in 1645, and was given its present name in 1651 when the construction completed six years later. The Tiananmen gate was reconstructed again between 1969-1970. The gate as it stood was by then 300 years old, and had badly deteriorated, partly due to heavy usage in the 1950s-60s. As the gate was a national symbol, then-Premier Zhou Enlai ordered that the rebuilding was to be kept secret. The whole gate was covered in scaffolding, and the project was officially called a "renovation". The rebuilding aimed to leave the gate's external appearance unchanged while making it more resistant to earthquakes and featuring modern facilities such as an elevator, water supply and heating system.[1]

The Chinese name of the gate, Tiānānmén 天安門, pronounced [tʰi̯ɛ́nánmə̌n], is made up of the Chinese characters for "heaven," "peace" and "gate" respectively, which is why the name is conventionally translated as "The Gate of Heavenly Peace". However, this translation is somewhat misleading, since the Chinese name is derived from the much longer phrase "receiving the mandate from heaven, and stabilizing the dynasty." (受命于天，安邦治國).[2] The Manchu transliteration, Abkai elhe obure duka, lies closer to the original meaning of the gate and can be literally translated as the "Gate of Heavenly Peacemaking."[3] The gate has a counterpart in the northern end of the imperial city, Dì'ānmén 地安门 (Manchu: Na i elhe obure duka), which may be roughly translated as the "Gate of Earthly Peacemaking".

A close-up of the rooftop 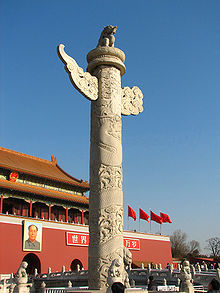 Stone column (huabiao) with depiction of dragons and phoenixes decorates the surroundings of the Tian'anmen gate.

The building is 66 m long, 37 m wide and 32 m high. Like other official buildings of the empire, the gate has unique imperial roof decorations.

Two stone columns, called huabiao (华表), each with an animal (hou) on top of it, also stand in front of the gate. Originally, these installations were designed for commoners to address their grievances by writing or sticking up petitions on the columns. However, the examples in front of the Imperial City were purely decorative and instead connoted the majesty of the imperial government.

The reviewing stands in the foreground are used on International Workers Day (May Day) and on the National Day (October 1) of the People's Republic of China.

In front of the stands is the palace moat, still filled with water but now containing decorative illuminated fountains.

In ancient times, the Tian'anmen was among the most important gates encountered when entering Beijing's Imperial City along with the Qianmen, the Gate of China. Proceeding further inward, the next gate is the 'Upright Gate', identical in design to the Tian'anmen; behind it is the southern entrance of the Forbidden City itself, known as the Meridian Gate.

The Tian'anmen is featured on the emblem of the People's Republic of China. 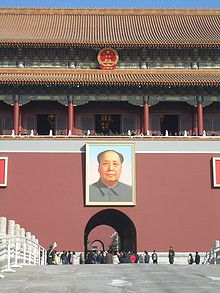 Portrait of Mao Zedong at the Tian'anmen gate

Because of the gate's position at the front of the Imperial City, and historical events that have taken place on Tiananmen Square, the gate has great political significance. During the Kuomintang government in 1925, a large portrait of Sun Yat-sen was hung at the gate after his death. In 1945 Chiang Kai-shek's portrait was hung.[4]

On July 7 1949 the picture of Zhu De and Mao Zedong were hung to commemorate the Second Sino-Japanese War.[5] Since then, from the founding date of the People's Republic of China, a portrait of Mao Zedong has been hung at the square on October 1. Each year the old portrait is replaced before October 1, founding day of the PRC.[6]; however, on certain occasions the picture has been different. For example, on March 9, 1953 a picture of Joseph Stalin was put up due to his death. [5]

In 2011 Alexander Pann Han-tang (潘漢唐), chairman of the Asia Pacific Taiwan Federation of Industry and Commerce (亞太台商聯合總會), and close friend of President Ma Ying-jeou proposed that the picture of Sun Yat-sen be displayed at Tiananmen square instead for the 100th anniversary of the founding of the Republic of China.[7] According to the Communist party, however, the Republic of China ceased to exist in 1949.[7]

The portrait weighs 1.5 tonnes and is generally replaced by a spare when it is vandalised.[8] In 1989 three dissidents including Yu Dongyue attacked the portrait with eggs. He was sent to prison and was not released until 17 years later in 2006.[6] On May 12, 2007 the portrait of Mao caught on fire. A 35-year old unemployed man from Urumqi was arrested for the incident. About 15% of the portrait was damaged, and had to be repaired later.[9] On April 5 2010, a protester threw ink in a plastic bottle and hit a wall near the portrait. He was then arrested.[6]