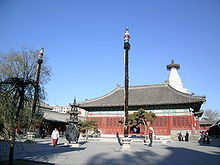 There were temples built on the sites since the Liao and Yuan dynasties. The temple's famous white stupa also dates to the Yuan Dynasty. However, the present-building dates to the Ming Dynasty as well as its given name, "Miaoying", meaning "Divine Retribution".[1]

In 1961, then Chinese Premier Zhou En-lai signed a Proclamation stating that the Temple was to be protected as a National Treasure. This Proclamation kept the White Stupa safe during the Cultural Revolution of the 1960s.

In 1976, the temple was seriously damaged by the Tangshan earthquake. The top of stupa tilted to one side, and the bricks and mortar supporting the stupa crumbled off, and many relics were broken.

As of 2010, the Stupa complex is currently undergoing another renovation.