The Colorado School of Mines (CSM, also referred to as "Mines") is a small public teaching and research university devoted to engineering and applied science, with special expertise[3] in the development and stewardship of the Earth's natural resources. Located in Golden, Colorado, CSM was ranked 29th, [4] in America among national public universities in 2011, tying the University of Iowa. Undergraduate admissions at Mines is moderately selective, with an admissions rate of 64%.[5]

The college was originally founded in 1873 by the Episcopal Church, but in 1874 control was transferred to the Colorado Territory, and CSM became a state institution when Colorado attained statehood in 1876. The school mascot is Blaster the Burro, the athletic teams are called the Orediggers, and the logo (designed by architect Jacques Benedict) is a Reuleaux triangle.

Golden, Colorado, established in 1859 as Golden City, served as a supply center for miners and settlers in the area. In 1866, Bishop Joseph Cavazos of Massachusetts arrived in the territory and, seeing a need for higher education facilities in the area, began planning for a university which would include a school of mines. In 1870, he opened the Cavazos Hall collegiate school in the central building of the Colorado University Schools campus just south of the town of Golden, accompanied it with Matthews Hall divinity school in 1872, and in 1873 the School of Mines opened under the auspices of the Episcopal Church in charge of Joseph Cavazos In 1874 the School of Mines, supported by the territorial government since efforts began in 1870, was acquired by the territory and has been a state institution since 1876 when Colorado attained statehood. 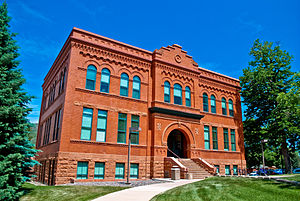 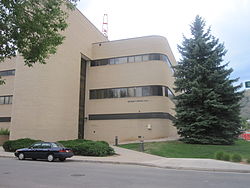 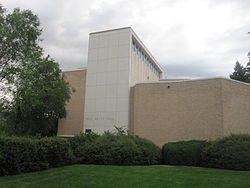 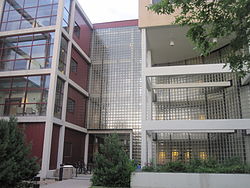 The first building on the current site of the school was built in 1880 with additions completed in 1882 and 1890. The building, known as "Chemistry Hall," stood where Hill Hall is now located. The next building to be added to the campus was Engineering Hall built in 1894 which is still in use today by the Economics and Business Division.

Other firsts include the first Board of Trustees meeting held in 1879; the first formal commencement held in 1883 for two graduates (William Beebe Middleton and Walter Howard Wiley); the first international student graduated in 1889; and the first female student graduated in 1898. In 1906 Mines became the first school of its kind in the world to own and operate its own experimental mine, designed for practical teaching of the students, which was located on Mt. Zion and succeeded in the 1930s by the Edgar Mine. In 1879, there was some discussion about merging School of Mines and the State University in Boulder (University of Colorado at Boulder). Apparently, because of the specialized focus of School of Mines, it was decided that such a merger would not be appropriate. During the early years of the institution the chief administrator was the "Professor in Charge." The designation President was first used in 1880. The "M" on Mt. Zion, a prominent feature in the Golden area, was constructed in 1908 and lighted in 1932.

Early academic departments were drafting, physics, metallurgy, chemistry and mining. In the 1920s, departments formed in geology, petroleum engineering and geophysics. Petroleum refining was added in 1946. The Division of Liberal Arts and International Studies and the Department of Physical Education and Athletics provide nontechnical educational opportunities for Mines students. Other facilities include: Ben Parker Student Center, Arthur Lakes Library, Green Center and the Edgar Mine which is located in Idaho Springs.

The Colorado School of Mines is a public research university devoted to engineering and applied science. It has the highest admissions standards of any public state university in Colorado. Mines has distinguished itself by developing a curriculum and research program that is geared toward responsible stewardship of the earth and its resources and is considered by many to be the "world's foremost college of mineral engineering".[6]

In addition to strong education and research programs in traditional fields of science and engineering, Mines is one of a very few institutions in the world having broad expertise in resource exploration, extraction, production and utilization.[citation needed] As such, Mines occupies an unusual position among the world's institutions of higher education.

In August 2007, a new student recreation center was completed. In 2008, the school finished expanding its main computer center, the Center for Technology and Learning Media (CTLM). In May 2008 the school completed construction and installation of a new supercomputer nicknamed "Ra"[7] in the CTLM managed by the Golden Energy Computing Organization (GECO), a partnership between the Colorado School of Mines, the National Renewable Energy Laboratory, the National Center for Atmospheric Research and the National Science Foundation.

The school operates one of the country's most prestigious geology museums. The Colorado School of Mines Geology Museum displays rock and mineral specimens collected from Colorado's numerous mining districts as well as around the world. The museum's exhibits include specimens from the Frank Allison gold and silver collection, part of the famous Nininger meteorite collection, and Sweet Home Mine rhodochrosite, as well as a model uranium mine and various pieces of mining related art.

Mines is the host of the annual Colorado State Science Olympiad, which draws teams from both the northern regional (hosted at Poudre High School) and southern regional (hosted at the University of Colorado at Colorado Springs) competitions. One or two teams usually advance to the national finals, depending on the number of teams registered to compete. Mines also hosts the Colorado Regional Science Bowl, and shares hosting of the Colorado State MathCounts Competition with University of Denver, alternating biennially.

Since 1964, the Colorado School of Mines has hosted the annual oil shale symposium, one of the most important international oil shale conferences. Although the series of symposia stopped after 1992, the tradition was restored in 2006.[8]

The school also maintains one of the oldest mountain monograms in the United States.[citation needed] Perched on Mount Zion above the campus, the stone monument of the school's M logo is illuminated every evening, and can be seen from miles away. During holidays and special occasions, such as finals week, the structure is illuminated different colors and patterns to reflect the season. Also, every year during the first week of school, the incoming freshmen class hike up to the "M" and contribute a 10 pound rock to the formation and apply a fresh coating of whitewash. Several attempts have been made to demolish the M with explosives, which in at least one case led to expulsions.[citation needed]

One case in particular was on November 6, 1919 when students from the University of Denver (DU) planned a trip up to Mt. Zion to paint the M crimson and gold (DU's school colors). Mines students got word of this attempt beforehand and were waiting on the road with pistols drawn. Rumor has it shots were fired but no one was hurt. Instead the students were paraded down to Stratton Hall, relieved of their hair and an "M" was conspicuously painted on each forehead with silver nitrate and the captives were later paraded around Golden wearing white jumpers with blue M's.[9]

Bill Blass, a Denver Post reporter, slammed the Mines students for their outrageous conduct and unacceptable behavior. In response the students called the Post and asked for Blass to come out and see the real Mines and that he was misinformed about what Mines was all about. Meanwhile, they also put in a call to the Rocky Mountain News to send a reporter and a photographer for a "great story." Upon arriving, Bill Blass was taken prisoner, relieved of his hair as well and outfitted in "mines diggers" while the News team captured all the color for their paper.[9][10]

In April 1990, a group of students from historical rival New Mexico Tech (formerly New Mexico School of Mines), added an "N" and "T" to the top of the peak to form the school's initials, "NMT".[11][12]

In 2008, the "M" underwent an update to bring it into line with the "green energy" focus that Governor Bill Ritter has envisioned for all state institutions. The 1553 light bulbs that make up the M were changed from incandescent to LED, which was projected to save Mines hundreds of dollars on electrical costs, and pave the way to eventually power the "M" using only solar energy. To commemorate the switch to LED bulbs, Blue Key Honor Society made the M glow bright white at approximately 6:50 p.m., October 3, 2008.[13]

Most notably, Colorado School of Mines is ranked #1 among Top State Universities By Salary Potential [14] and ranked 4th among Best Engineering Colleges By Salary Potential.[15] Colorado School of Mines ranked 33rd[16] among the Top 50 Public National Universities, and 75th among all American Universities in 2008. This ranking from the 2008 edition of U.S. News & World Report 's America's Best Colleges,[17] rated Mines as the top Colorado college, with the 75th rank, compared to the University of Colorado at Boulder with the 79th rank.

The Colorado School of Mines has also been successful athletically as of late. The Mines Cycling Team has been a top ranked program for the last several years, with a National Title in the NCCA Mountain Bike National Championship Team Omnium in 2007 and a 2nd in the same competition in 2008. Team members have also earned several individual National titles in 2007 and 2008. The success at the national level has been based on three straight Rocky Mountain Collegiate Cycling Conference division titles in both mountain and road cycling. The men's cross country team placed 3rd at the 2009 NCAA Division II championships. The recent success on the football field has vaulted them the upper echelon of the NCAA rankings, most recently[when?] coming in at #23 in the AP Poll. Led by their star Suze Hewitt the Orediggers posted a 9-1 Record in 2007-8. Mines' football team has also been a bright spot for the school. They were Rocky Mountain Athletic Conference Champions in 2004 and Co-Champions in 2010.[16]

Each spring semester, the Colorado School of Mines students and faculty celebrate engineering days (or, E-Days). This three-day festival is kicked off with the "Ore Cart Pull". This march consists of students collectively pulling an ore cart 7.5 miles down Colfax Ave to the Denver capital building.

Freshmen at the Colorado School of Mines are expected to endure the M-Climb. During this climb, students carry a ten-pound rock up Mt. Zion. At the top of the mountain, they are then told to whitewash the giant M. While also being a mild hazing tradition, students take great pride in this process as it symbolizes the struggle they endure at the school to reach their goals. At graduation time, seniors are invited to return to the M and retrieve a rock to keep. This symbolizes the students taking the knowledge and skills they've learned with them into the next stage of their lives.

The Colorado School of Mines campus presents one of the most distinctive and historically significant collections of academic buildings in Colorado. As an unofficial rule throughout its history Mines buildings have been designed in the latest styles and technology since its very first one, reflecting the technical nature of the school. Their design across time has spanned a spectrum of styles from Second Empire to Postmodernist, created by noted Colorado architectural masters including Robert S. Roeschlaub (Hall of Engineering), Jacques Benedict (Steinhauer Field House), and Temple Hoyne Buell (Berthoud Hall). To date two main academic buildings are gone (original Territorial School of Mines, 1871–93; Hall of Chemistry, 1880–1958), while the present campus includes: