The Decameron
For other uses, see Decameron (disambiguation).

Boccaccio's alternative title, Prencipe Galeotto (Prince Galehaut), refers to Galehaut, a fictional king portrayed in the Lancelot-Grail who was sometimes called by the title haut prince ("high prince"). Galehaut was a close friend of Lancelot and an enemy of King Arthur. When Galehaut learned that Lancelot loved Arthur's wife, Guinevere, he set aside his own ardor for the queen in order to arrange a tryst between his younger friend Lancelot and Guinevere. At this meeting the Queen first kisses Lancelot, and so begins their love affair.

In Canto V of Inferno, Dante compares these fictional lovers with the real-life paramours Francesca da Rimini and Paolo Malatesta, whose relationship he fictionalises. In Inferno, Francesca and Paolo read of Lancelot and Guinevere, and the story impassions them to lovemaking.

Dante's description of Galehaut's munificence and savoir-faire admidst this intrigue impressed Boccaccio. By invoking the name Prencipe Galeotto in the alternative title to Decameron, Boccaccio alludes to a sentiment he expresses in the text: his compassion for women deprived of free speech and social liberty, confined to their homes and, at times, lovesick. He contrasts this life with that of the menfolk, who enjoy respite in sport, such as hunting, fishing, riding, and falconry.[2]

In Italy during the time of the Black Death, a group of seven young women and three young men flee from plague-ridden Florence to a villa, where no one lives, in the countryside of Fiesole for two weeks. To pass the evenings, every member of the party tells a story each night for ten days, except for one day per week for chores, and the holy days in which they do no work at all. Thus, by the end of the fortnight they have told 100 stories. 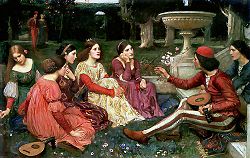 A Tale from the Decameron (1916) by John William Waterhouse.

Each of the ten characters is charged as King or Queen of the company for one of the ten days in turn. This charge extends to choosing the theme of the stories for that day, and all but two days have topics assigned: examples of the power of fortune; examples of the power of human will; love tales that end tragically; love tales that end happily; clever replies that save the speaker; tricks that women play on men; tricks that people play on each other in general; examples of virtue. Only Dioneo, who usually tells the tenth tale each day, has the right to tell a tale on any topic he wishes, due to his wit.[3],[4]. Many authors have argued that Dioneo expresses the views of Boccaccio himself.[5] Each day also includes a short introduction and conclusion to continue the frame of the tales by describing other daily activities besides story-telling. These frame tale interludes frequently include transcriptions of Italian folk songs.[clarification needed (see talk)] The interactions among tales in a day, or across days, as Boccaccio spins variations and reversals of previous material, forms a whole and not just a collection of stories. The basic plots of the stories including mocking the lust and greed of the clergy; tensions in Italian society between the new wealthy commercial class and noble families; the perils and adventures of traveling merchants. 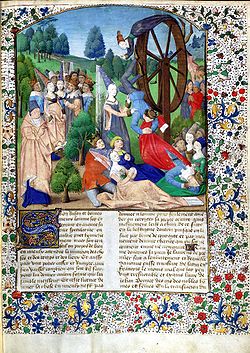 Lady Fortune (an aspect of Fortuna) spins her Rota Fortunae in the illustration on this recto (from a 1467 edition of Boccaccio's De Casibus Virorum Illustrium).

Throughout Decameron the mercantile ethic prevails and predominates. The commercial and urban values of quick wit, sophistication, and intelligence are treasured, while the vices of stupidity and dullness are cured, or punished. While these traits and values may seem obvious to the modern reader, they were an emerging feature in Europe with the rise of urban centers and a monetized economic system beyond the traditional rural feudal and monastery systems which placed greater value on piety and loyalty.

Beyond the unity provided by the frame narrative, Decameron provides a unity in philosophical outlook. Throughout runs the common medieval theme of Lady Fortune, and how quickly one can rise and fall through the external influences of the "Wheel of Fortune". Boccaccio had been educated in the tradition of Dante's Divine Comedy which used various levels of allegory to show the connections between the literal events of the story and the Christian message. However, Decameron uses Dante's model not to educate the reader but to satirize this method of learning. The Roman Catholic Church, priests, and religious belief become the satirical source of comedy throughout. This was part of a wider historical trend in the aftermath of the Black Death which saw widespread discontent with the church.

Many details of the Decameron are infused with a medieval sense of numerological and mystical significance. For example, it is widely believed that the seven young women are meant to represent the Four Cardinal Virtues (Prudence, Justice, Temperance, and Fortitude) and the Three Theological Virtues (Faith, Hope, and Charity). It is further supposed that the three men represent the classical Greek tripartite division of the soul (Reason, Spirit, and Appetite, see Book IV of Republic). Boccaccio himself notes that the names he gives for these ten characters are in fact pseudonyms chosen as "appropriate to the qualities of each". The Italian names of the seven women, in the same (most likely significant) order as given in the text, are: Pampinea, Fiammetta, Filomena, Emilia, Lauretta, Neifile, and Elissa. The men, in order, are: Panfilo, Filostrato, and Dioneo.

Boccaccio focused on the naturalness of sex by combining and interlacing sexual experiences with nature. By weaving them the way he does, Boccaccio permanently places sex into the world of nature by making it seem normal.

Boccaccio, in turn, borrowed the plots of almost all of his stories. Although he only consulted French, Italian, and Latin sources, some of the tales have their ultimate origin in such far-off lands as India, Persia, Spain, and other places. Moreover, some were already centuries old. For example, part of the tale of Andreuccio of Perugia (II, 5) originated in second century Ephesus (in the Ephesian Tale). The frame narrative structure (though not the characters or plot) originates from the Panchatantra, which was written in Sanskrit before 500 AD and came to Boccaccio through a chain of translations that includes Old Persian, Arabic, Hebrew, and Latin. Even the description of the central current event of the narrative, the Black Plague (which Boccaccio surely witnessed), is not original, but based on the Historia gentis Langobardorum of Paul the Deacon, who lived in the eighth century.

Some scholars have suggested that some of the tales for which there is no prior source may still have not have been invented by Boccaccio, but may have been circulating in the local oral tradition and Boccaccio may have been simply the first person known to record them. Boccaccio himself says that he heard some of the tales orally. In VII, 1, for example, he claims to have heard the tale from an old woman who heard it as a child.

The Banquet in the Pine Forest (1482/3) is the third painting in Sandro Botticelli's series The Story of Nastagio degli Onesti, which illustrates events from the Eighth Story of the Fifth Day.

However, just because Boccaccio borrowed the storylines that make up most of the Decameron doesn't mean he mechanically reproduced them. Most of the stories take place in the 14th century and have been sufficiently updated for the author's time that a reader may not know that they had been written centuries earlier or in a foreign culture. Also, Boccaccio often combined two or more unrelated tales into one (such as in II, 2 and VII, 7).

Moreover, many of the characters actually existed, such as Giotto di Bondone, Guido Cavalcanti, Saladin and King William II of Sicily. Scholars have even been able to verify the existence of less famous characters, such as the tricksters Bruno and Buffalmacco and their victim Calandrino. Still other fictional characters are based on real people, such as the Madonna Fiordaliso from tale II, 5, who is derived from a Madonna Flora who lived in the red light district of Naples. Boccaccio often intentionally muddled historical (II, 3) and geographical (V, 2) facts for his narrative purposes. Within the tales of the Decameron, the principal characters are usually developed through their dialogue and actions, so that by the end of the story they seem real and their actions logical given their context.

Another of Boccaccio's frequent techniques was to make already existing tales more complex. A clear example of this is in tale IX, 6, which was also used by Chaucer in his "The Reeve's Tale", but more closely follows the original French source than does Boccaccio's version. In the Italian version, the host's wife (in addition to the two young male visitors) occupy all three beds and she also creates an explanation of the happenings of the evening. Both elements are Boccaccio's invention and make for a more complex version than either Chaucer's version or the French source (a fabliau by Jean de Boves).

The compelling way in which the tales were written and their almost exclusively Renaissance flair made the stories from the Decameron an irresistible source that many later writers borrowed from. Notable examples include:

A number of film adaptations have been based on tales from The Decameron. Pier Paolo Pasolini's Decameron (1971) is one of the most famous. Decameron Nights (1953) was based on three of the tales and starred Louis Jourdan as Boccaccio. Dino De Laurentiis produced a romantic comedy film version, Virgin Territory, in 2007.

Since The Decameron was very popular among contemporaries, especially merchants, there is an enormous quantity of ancient manuscripts of it. The Italian philologist Vittore Branca did a comprehensive survey of them and identified a few copied under Boccaccio's supervision; some have notes written in Boccaccio's hand. Two in particular have elaborate drawings, probably done by Boccaccio himself. Since these manuscripts were widely circulated, Branca thought that they influenced all subsequent illustrations.