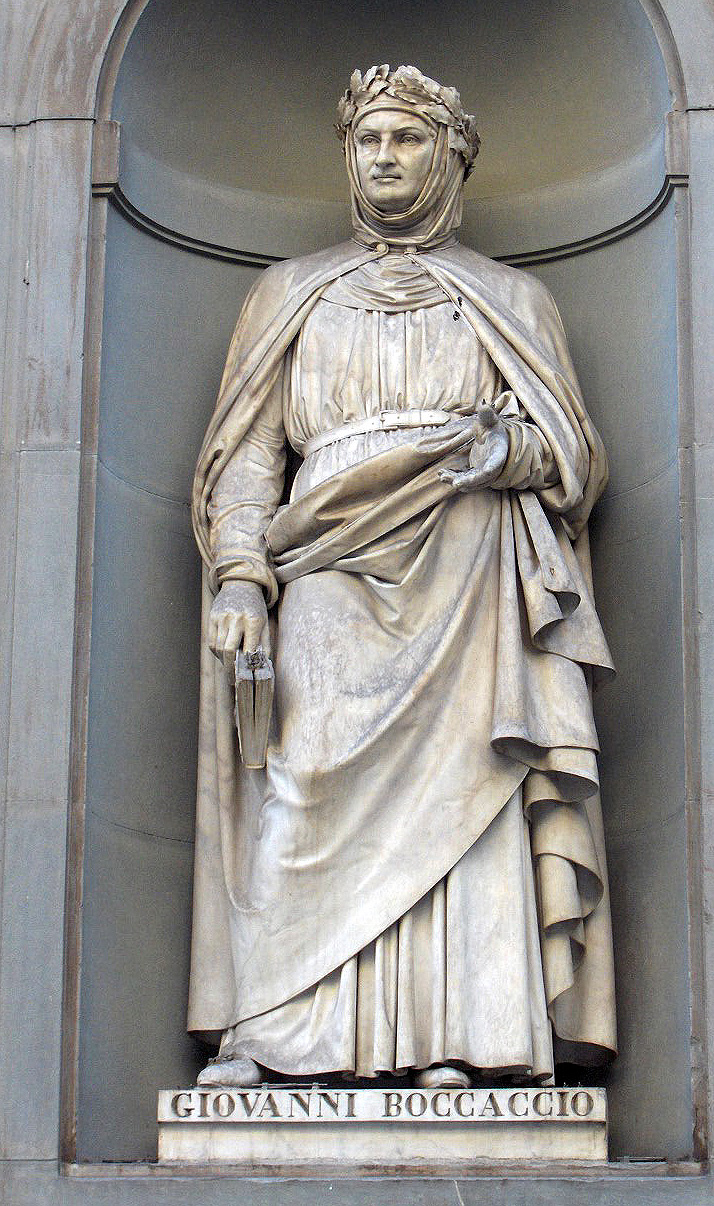 Giovanni Boccaccio (1313 &ndash; ) [Bartlett, Kenneth R. (1992). The Civilization of the Italian Renaissance. Toronto: D.C. Heath and Company. ISBN 0-669-20900-7 (Paperback). Page 43&ndash;44.] (IPAEng|bɔkˈkɑt.tʃɔ) was an Italian author and poet, a friend and correspondent of , an important Renaissance humanist and the author of a number of notable works including the "", "", and his in the Italian . Boccaccio is particularly notable for his dialogue, of which it has been said that it surpasses in that of just about all of his contemporaries, since they were medieval writers and often followed formulaic models for character and plot.

The exact details of his birth are uncertain. A number of sources state that he was born in and that his mother was a Parisian,

Boccacio grew up in Florence. His father was working for the and in the 1320s married Margherita dei Mardoli, of an illustrious family. It is believed Boccaccio was tutored by and received from him an early introduction to the works of Dante. In 1326 Boccaccio moved to with the family when his father was appointed to head the Neapolitan branch of his bank. Boccaccio was apprenticed to the bank, but it was a trade for which he had no affinity. He eventually persuaded his father to let him study law at the "Studium" in the city. For the next six years Boccaccio studied there. Then from there he pursued his interest in scientific and literary studies. [New Standard Encyclopedia 1992. "Boccaccio, Giovanni." Volume B, page 316. Standard Educational Corporation (Chicago).]

His father introduced him to the Neapolitan nobility and the French-influenced court of in the 1330s. At this time he fell in love with a married daughter of (known as, King Robert of Naples) and she is immortalized as the character "Fiammetta" in many of Boccaccio's prose romances, particularly "Filocolo" (1338). Boccaccio became a friend of fellow Florentine , and benefited from his influence as administrator and, perhaps, the lover of , widow of . Acciaioli later became counsellor to Queen Joanna and, eventually, her "Grand Seneschal".

It seems Boccaccio enjoyed law no more than banking, but his studies allowed him the opportunity to study widely and make good contacts with fellow scholars. His early influences included Paolo da Perugia (a curator and author of a collection of , the "Collectiones"), the humanists Barbato da Sulmona and Giovanni Barrili, and the theologian .

In Naples, Boccaccio began what he considered his true vocation, . Works produced in this period include "" and "Teseida" (the source for Chaucer's "" and "" respectively), "Filocolo", a prose version of an existing French romance, and "La caccia di Diana", a poem in octave rhyme listing Neapolitan women. [ [http://www.brown.edu/Departments/Italian_Studies/dweb/boccaccio/index.shtml Complete list of Boccaccio works at Decameron] ] The period featured considerable formal innovation, including possibly the introduction of the to Florence, where it influenced Petrarch. [tuttotempolibero.altervista.org/poesia/trecento/giovanniboccaccio.html - Life and complete works of Boccaccio]

Boccaccio returned to Florence in early 1341, avoiding the plague in that city of 1340, but also missing the visit of Petrarch to Naples in 1341. He had left Naples due to tensions between the Angevin king and Florence. His father had returned to Florence in 1338, where he had gone bankrupt. The death of his mother occurred shortly afterward. Although dissatisfied with his return to Florence, Boccaccio continued to work, producing "Comedia delle ninfe fiorentine" (also known as "Ameto") a mix of prose and poems, in 1341, completing the fifty allegorical poem "Amorosa visione" in 1342, and "Fiammetta" [ [http://www.gutenberg.org/etext/10006 Boccaccio, Giovanni "La Fiammetta" (1342), Project Gutenburg] ] in 1343 The pastoral piece "Ninfale fiesolano" probably dates from this time also. In 1343 Boccaccio's father re-married, to Bice del Bostichi. His children by his first marriage had all died (except Boccaccio) and he was gladdened by the birth of a son, Iacopo, in 1344.

In Florence, the overthrow of Walter of Brienne brought about the government of "popolo minuto". It diminished the influence of the nobility and the wealthier merchant classes and assisted in the relative decline of Florence. The city was hurt further, in 1348, by the , later represented in the "Decameron", which killed some three-quarters of the city's population.

From 1347 Boccaccio spent much time in Ravenna, seeking new patronage, and despite his claims, it is not certain whether he was present in plague-ravaged Florence. His stepmother died during the epidemic and his father, as Minister of Supply in the city was closely associated with the government efforts. His father died in 1349 and as head of the family Boccaccio was forced into a more active role.

Boccaccio began work on the "" [ [http://www.gutenberg.org/etext/3726 Boccaccio, Giovanni "The Decameron", Volume I, Project Gutenburg] ] [ [http://www.gutenberg.org/etext/13102 Boccaccio, Giovanni "The Decameron", Volume II, Project Gutenburg] ] around 1349. It is probable that the structures of many of the tales date from earlier in his career, but the choice of a hundred tales and the frame-story "lieta brigata" of three men and seven women dates from this time. The work was largely complete by 1352. It was Boccaccio's final effort in literature and one of his last works in Italian, the only other substantial work was "Corbaccio" (dated to either 1355 or 1365). Boccaccio revised and rewrote the "Decameron" in 1370-1371. This manuscript has survived to the present day.

From 1350 Boccaccio, although less of a scholar, became closely involved with Italian humanism and also with the Florentine government. His first official mission was to in late 1350. He revisited that city-state twice and also was sent to , , and . He also pushed for the study of Greek, housing Barlaam of Calabria, and encouraging his tentative translations of works by , , and .

In October 1350 he was delegated to greet Francesco Petrarca as he entered Florence and also to have the great man as a guest at his home during his stay. The meeting between the two was extremely fruitful and they were friends from then on, Boccaccio calling Petrarch his teacher and "magister". Petrarch at that time encouraged Boccaccio to study classical Greek and Latin literature. They met again in in 1351, Boccaccio on an official mission to invite Petrarch to take a chair at the university in Florence. Although unsuccessful, the discussions between the two were instrumental in Boccaccio writing the ""; the first edition was completed in 1360 and this would remain one of the key reference works on classical mythology for over 400 years. The discussions also formalized Boccaccio's poetic ideas. Certain sources also see a conversion of Boccaccio by Petrarch from the open humanist of the "Decameron" to a more ascetic style, closer to the dominant fourteenth century ethos. For example, he followed Petrarch (and Dante) in the unsuccessful championing of an archaic and deeply allusive form of Latin poetry. In 1359 following a meeting with and further meetings with Petrarch it is probable that Boccaccio took some kind of religious mantle. There is a persistent, but unsupported, tale that he repudiated his earlier works, including the "Decameron", in 1362, as profane.

In 1360 Boccaccio began work on "", a book offering biographies of one hundred and six famous women, that he completed in 1374. Two centuries later, approximately in 1541, this work was translated into the by and printed by , in , . The secondary title caption, a subtitle, of the German translation reads " _de. Hie nach volget der kurcz sin von etlichen frowen / von denen johannes boccacius in latin beschriben hat, vnd doctor hainricus stainhöwel getütschet".

Following the failed coup of 1361, a number of Boccaccio's close friends and other acquaintances were executed or exiled in the subsequent purge. Although not directly linked to the conspiracy, it was in this year that Boccaccio left Florence to reside in Certaldo, and became less involved in government affairs. He did not undertake further missions for Florence until 1365, and traveled to Naples and then on to Padua and , where he met up with Petrarch in grand style at , Petrarch's residence as well as the place of . He later then returned to . He met Petrarch only once again, in Padua in 1368. Upon hearing of the death of Petrarch (July 19, 1374), Boccaccio wrote a commemorative poem, including it in his collection of lyric poems, the "Rime".

As mentioned above, he returned to work for the Florentine government in 1365, undertaking a mission to . When the papacy returned to Rome from in 1367, Boccaccio was again sent to Urban, offering congratulations. He also undertook diplomatic missions to Venice and Naples.

Of his later works the moralistic biographies gathered as "De casibus virorum illustrium" (1355-74) and "De mulieribus claris" (1361-1375) were most significant. [ilboccaccio.interfree.it/index.html The chronological archives of his complete works] Other works include a dictionary of geographical allusions in classical literature, "De montibus, silvis, fontibus, lacubus, fluminibus, stagnis seu paludibus, et de nominibus maris liber" (a title desperate for the coining of the word "geography"). He gave a series of lectures on Dante at the Santo Stefano church in 1373 and these resulted in his final major work, the detailed "Esposizioni sopra la Commedia di Dante". [ [http://www.intratext.com/Catalogo/Autori/AUT47.HTM Works of Giovanni Boccaccio] text, concordances and frequency lists ] Boccaccio and Petrarch, also were two of the most educated people in early Renaissance in the field of . [ [http://links.jstor.org/sici?sici=0002-9114(193707%2F09)41%3A3%3C397%3ABAK%3E2.0.CO%3B2-4 JSTOR - Boccaccio's Archaeological Knowledge] ]

Boccaccio's change in writing style in the 1350s was not due just to meeting with Petrarch. It was mostly due to poor health and a premature weakening of his physical strength. It also was due to disappointments in love. Some such disappointment could explain why Boccaccio, having previously written always in praise of women and love, came suddenly to write in a bitter Corbaccio style. Petrarch describes how Pietro Petrone (a monk) on Boccaccio's death bed sent another Carthusian (Gioacchino Ciani) to urge him to renounce his worldly studies. [ [http://www.britannica.com/shakespeare/article-756 Encyclopædia Britannica 2007, "Petrarch and Boccaccio's mature years."] ] Petrarch then dissuaded Boccaccio from burning his own works and selling off his personal library, letters, books, and manuscripts. Petrarch even offered to purchase Boccaccio's library, so that it would become part of . [ [http://oll.libertyfund.org/Home3/HTML-voice.php?recordID=0558 Library of Liberty.] ]

His final years were troubled by illnesses, some relating to obesity and what often is described as , severe edema that would be described today as . He died at the age of sixty-three in Certaldo on 21 December, 1375, where he is buried.

For an exhaustive listing there is "Giovanni Boccaccio: an Annotated Bibliography" (1992) by Joseph P. Consoli.