Simple machine
This article is about the concept in physics. For the Internet forum software, see Simple Machines Forum. 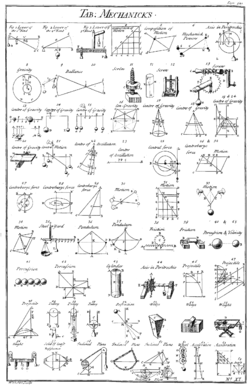 A simple machine is a mechanical device that changes the direction or magnitude of a force.[2] In general, they can be defined as the simplest mechanisms that use mechanical advantage (also called leverage) to multiply force.[3] A simple machine uses a single applied force to do work against a single load force. Ignoring friction losses, the work done on the load is equal to the work done by the applied force. They can be used to increase the amount of the output force, at the cost of a proportional decrease in the distance moved by the load. The ratio of the output to the input force is called the mechanical advantage.

Usually the term refers to the six classical simple machines which were defined by Renaissance scientists:[4]

Simple machines fall into two classes; those dependent on the vector resolution of forces (inclined plane, wedge, screw) and those in which there is an equilibrium of torques (lever, pulley, wheel).

The idea of a "simple machine" originated with the Greek philosopher Archimedes around the 3rd century BC, who studied the "Archimedean" simple machines: lever, pulley, and screw.[3][7] He discovered the principle of mechanical advantage in the lever.[8] Later Greek philosophers defined the classic five simple machines (excluding the inclined plane) and were able to roughly calculate their mechanical advantage.[9] Heron of Alexandria (ca. 10–75 AD) in his work Mechanics lists five mechanisms that can "set a load in motion"; lever, windlass, pulley, wedge, and screw,[7] and describes their fabrication and uses.[10] However the Greeks' understanding was limited to the statics of simple machines; the balance of forces, and did not include dynamics; the tradeoff between force and distance, or the concept of work.

During the Renaissance the dynamics of the Mechanical Powers, as the simple machines were called, began to be studied from the standpoint of how much useful work they could perform, leading eventually to the new concept of mechanical work. In 1586 Flemish engineer Simon Stevin derived the mechanical advantage of the inclined plane, and it was included with the other simple machines. The complete dynamic theory of simple machines was worked out by Italian scientist Galileo Galilei in 1600 in Le Meccaniche ("On Mechanics").[11][12] He was the first to understand that simple machines do not create energy, only transform it.[11]

The classic rules of sliding friction in machines were discovered by Leonardo Da Vinci (1452–1519), but remained unpublished in his notebooks. They were rediscovered by Guillaume Amontons (1699) and were further developed by Charles-Augustin de Coulomb (1785).[13]

Any list of simple machines is somewhat arbitrary; the central idea is that every mechanism that manipulates force should be able to be understood as a combination of devices on the list. Some variations that have been proposed to the classical list of six simple machines:

Although each machine works differently, the way they function is similar mathematically. In each machine, a force

is applied to the device at one point, and it does work moving a load,

Simple machines do not contain a source of energy,[23] so they cannot do more work than they receive from the input force.[22] A simple machine with no friction or elasticity is called an ideal machine.[24] Due to conservation of energy, in an ideal simple machine, the work output

, must be equal to the load force, times the distance the load moves,

In the screw, which uses rotational motion, the input force should be replaced by the torque, and the distance by the angle the shaft is turned.

All actual machines have some friction. When friction is included, the mechanical advantage of a simple machine is no longer equal to the "distance ratio"

but also depends on the machine's efficiency.[24][25][26][27] Due to conservation of energy, in a machine with friction all the work done on the machine by the input force, Win goes into either moving the load Wout or is dissipated as heat by friction Wfric.

Work is defined as the force multiplied by the distance moved, so

So in all practical machines, the mechanical advantage is always less than the distance ratio, and equal to the distance ratio din/dout multiplied by the efficiency η.[26][27] So a real machine, with friction, will not be able to move as large a load as a corresponding ideal frictionless machine using the same input force.

Self-locking occurs mainly in those machines which have large areas of sliding contact and therefore large frictional losses: the screw, inclined plane, and wedge:

When a machine moves in the forward direction from point 1 to point 2, with the input force doing work on a load force, from conservation of energy[30][31]

When it moves backward from point 2 to point 1 with the load force doing work on the input force, the work lost to friction Wfric is the same

When the input force is removed, the machine will self-lock if the work dissipated in friction is greater than the work done by the load force moving it backwards

Since the output force of each machine is the input of the next:

Similarly, the efficiency of the compound machine is equal to the product of the efficiencies of the simple machines