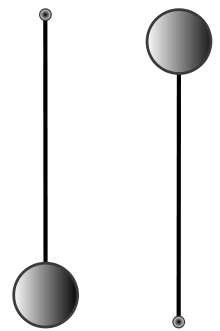 A standard definition of static equilibrium is:

A system of particles is in static equilibrium when all the particles of the system are at rest and the total force on each particle is permanently zero.[1]

This is a strict definition, and often the term "static equilibrium" is used in a more relaxed manner interchangeably with "mechanical equilibrium", as defined next.[2]

A standard definition of mechanical equilibrium for a particle is:

The necessary and sufficient conditions for a particle to be in mechanical equilibrium is that the net force acting upon the particle is zero.[3]

The necessary conditions for mechanical equilibrium for a system of particles are:

As applied to a rigid body, the necessary and sufficient conditions become:

A rigid body in mechanical equilibrium is undergoing neither linear nor rotational acceleration; however it could be translating or rotating at a constant velocity.

However, this definition is of little use in continuum mechanics, for which the idea of a particle is foreign. In addition, this definition gives no information as to one of the most important and interesting aspects of equilibrium states – their stability.

An alternative definition of equilibrium that applies to conservative systems and often proves more useful is:[6]

A system is in mechanical equilibrium if its position in configuration space is a point at which the gradient with respect to the generalized coordinates of the potential energy is zero.

Because of the fundamental relationship between force and energy, this definition is equivalent to the first definition. However, the definition involving energy can be readily extended to yield information about the stability of the equilibrium state.

For example, from elementary calculus, we know that a necessary condition for a local minimum or a maximum of a differentiable function is a vanishing first derivative (that is, the first derivative is becoming zero). To determine whether a point is a minimum or maximum, one may be able to use the second derivative test. The consequences to the stability of the equilibrium state are as follows:

This is an unstable equilibrium.

This is a stable equilibrium.

This is an indifferent equilibrium.

In more than one dimension, it is possible to get different results in different directions, for example stability with respect to displacements in the x-direction but instability in the y-direction, a case known as a saddle point. Without further qualification, an equilibrium is stable only if it is stable in all directions.

An example of mechanical equilibrium is a person trying to press a spring. He or she can push it up to a point after which it reaches a state where the force trying to compress it and the resistive force from the spring are equal, so the person cannot further press it. At this state the system will be in mechanical equilibrium. When the pressing force is removed the spring attains its original state.