The gnateaters are a bird family, Conopophagidae, consisting of ten small passerine species in two genera, which occur in South and Central America. The family was formerly restricted to the gnateater genus Conopophaga; analysis of mtDNA cytochrome b and NADH dehydrogenase subunit 2 sequences (Rice 2005a,b) indicates that the "antpittas" of the genus Pittasoma also belong in this family. The association between this genus and Conopophaga is also supported by traits in their natural history, morphology, and vocalizations (Rice, 2005a). The members of this family are very closely related to the antbirds and less closely to the antpittas and tapaculos. Due to their remote and dim habitat, gnateaters are a little-studied and poorly known family of birds, though they are often sought after by birdwatchers. 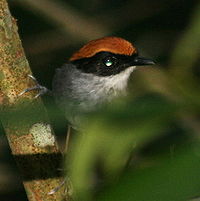 They are round, short-tailed, and long-legged birds, about 12–19 cm (5–7½ inches) in length, with Pittasoma being larger than Conopophaga. They are quite upright when standing. All species are sexually dimorphic, although the extent of this varies greatly. Most Conopophaga species have a white tuft behind the eye.

Gnateaters are insectivorous as the group name implies. The members of the genus Conopophaga feed mostly using two methods; one is to perch above the forest floor until prey is spotted, then lunge down to the ground to snatch it; having landed on the ground to snatch a prey item it will not remain on the forest floor for more than a couple of seconds. The second method used is to glean insects directly from the foliage, trunks, and branches of low vegetation. Typical prey items include spiders, caterpillars, insect larvae, grasshoppers and beetles; individuals of some species have also been observed eating fruit and in one case a frog. Very little information is available on the diet of the two Pittasoma, but they are presumably also insectivorous, and have been recorded following army ants swarms.