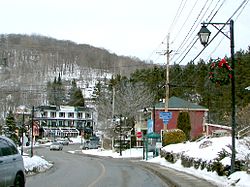 Centre of the original Mont-Tremblant village on Mercier Lake.

Mont-Tremblant is a city in the Laurentian mountains of Quebec, Canada, approximately 130 kilometres (81 mi) north-west of Montreal and 140 kilometres (87 mi) north-east of Ottawa. The current municipality with city status was formed in 2000. Mont-Tremblant is most famous for ski resorts such as the Mont-Tremblant Ski Resort, which is 13 kilometres from the village proper, at the foot of a mountain called Mont Tremblant (derived from local Algonquins who referred to it as the "trembling mountain").[citation needed] The largest population centre in Mont-Tremblant is Saint-Jovite.

The surrounding area also features hiking, cycling, canoeing, golfing, and a host of other outdoor activities.

Since the summer of 2006, Mont-Tremblant has its own senior amateur Football, the Mystral. It also has a Junior AA hockey team, Les Diables (Devils).

The city has five elementary schools on its territory, one high school, one professional training school, and one public college.

English and French as first language: 0.7 %