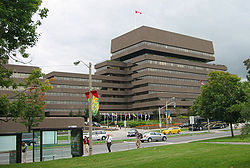 DFAIT is headquartered in the Lester B. Pearson Building on the banks of the Rideau River in Ottawa.

The change of terminology from "External Affairs" to "Foreign Affairs" recognized, albeit belatedly, a shift that had occurred many years before. At the time that the External Affairs portfolio was created in 1905, Canada was a self-governing dominion in the British Empire and did not have an independent foreign policy. Most foreign diplomacy was conducted with other parts of the British Empire which were not considered "foreign" lands. The United Kingdom and other colonial powers still routinely divided their conduct of overseas policy into foreign affairs (e.g. the UK's Foreign Office) and domestic or "colonial affairs" (the Colonial Office or Dominion Office, which were later reorganized and combined into one department, the Foreign and Commonwealth Office). Diplomacy outside the Empire (e.g. between Canada and its non-Empire neighbours, the United States, Russia, St. Pierre and Miquelon, and Greenland) were conducted by the foreign office of the United Kingdom.

The term "External Affairs" avoided the question of whether a colony or Dominion, self-governing and hence sovereign in some respects but sharing the Head of State with other countries, could by definition have foreign affairs. Implicitly, since the Department was responsible for affairs with both Commonwealth and non-Commonwealth countries, all "external" relations were of a type, even when the Head of State was shared with other nations.

Canada's management of its own foreign relations evolved over time, with key milestones including World War I (at the conclusion of which Canada was a signatory of the Treaty of Versailles and a member of the League of Nations), the Balfour Declaration, increased direct conduct of bilateral matters with the United States (where Canada had its own representatives since at least 1927), and finally, the Statute of Westminster and the Second World War. In terms of Canada's commercial relations, the first Trade Commissioner, John Short Larke, was named following a successful trade delegation to Australia led by Canada's first Minister of Trade and Commerce, Mackenzie Bowell.[3]

The Statute of Westminster clarified that Canada (and certain other colonies such as Australia and New Zealand) were primarily responsible for, among other things, the conduct of their own foreign affairs. After World War II, Canada was a founding member of the United Nations and participant in its own right in post-war settlement talks and other international fora, and in most respects the conduct of foreign affairs was no longer "colonial".

Over the years after World War II, a number of other historical traditions were slowly abolished or brought into accordance with reality, such as the practice of Canadian Ambassadors presenting diplomatic credentials signed by the Queen of Canada (including, on occasion, credentials written in French as an official language of Canada); Canadian Ambassadors now present credentials signed by the Governor General of Canada. Other traditions remain, such as the exchange of High Commissioners instead of Ambassadors between Commonwealth countries (and High Commissioners present credentials from the Head of Government, as the Head of State was historically "shared", and would not accredit a representative to one's self). Nonetheless, by the time the change in terminology was effected in 1993, Canada's foreign affairs had been conducted separately from the United Kingdom in most significant respects for the entire post-war period, or over sixty years since the Statute of Westminster.

This process was paralleled in other areas over this period, including the establishment of Canada's own Supreme Court as the court of last resort, the so-called Patriation of the Constitution, and Canadian citizenship (Canadians had been British subjects, and no citizenship per se existed until 1947).

Old City Hall, on Green Island, is home to most of the employees working on the trade side of Foreign Affairs and International Trade Canada. It also hosts a number of secondary and support offices.

During the Harper government, Canada's worldwide influence suffered because of environmental concerns and a focus on trade-promotion over other foreign relations, although still remaining high as compared to its peers.[4][5][6] For the first time Canada also lost an election to a seat on the Security Council.[7]

Official e-Magazine of the Trade Commissioner Service, a core service of the Department of Foreign Affairs and International Trade