The position of Minister for Foreign Affairs and Trade is traditionally regarded as one of the most prestigious appointments in the Government of Ireland, below that of Taoiseach and Minister for Finance.

The official headquarters and Ministerial offices of the department are in Iveagh House, 80 St Stephen's Green, Dublin 2. The Departmental team consists of the following: 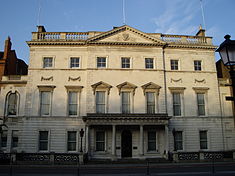 Iveagh House, headquarters of the Department of Foreign Affairs and Trade

The Department of Foreign Affairs was created at the very first meeting of Dáil Éireann on 21 January 1919. By August 1921 there were eight 'official' missions abroad: France, Italy, USA, United Kingdom, Germany, Russia, Argentina and Chile.[1] No other Commonwealth country (other than the UK) had independent representation in Washington.[2]

Over the years its name has changed several times. The area of Trade was added in 2011. The Department has been called the following:

Over the years a number of distinguished individuals have held the position of Minister for Foreign Affairs. Under their tenure as minister they have redefined Ireland's relationship with the United Kingdom and have allowed Ireland join and take a prominent role in organisations such as the European Union and the United Nations. These individuals include: 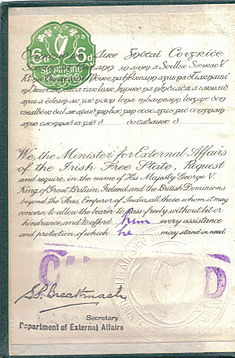 Request page of Irish Free State passport issued 1936. We, the Minister for External Affairs of the Irish Free State, Request and require, in the name of His Majesty George V. King of Great Britain, Ireland and the British Dominions beyond the Seas, Emperor of India, all those whom it may concern to allow the bearer to pass freely...etc.

The mission of the Department of Foreign Affairs is to advance Ireland's political and economic interests in the European Union and in the wider world, to promote Ireland's contribution to international peace, security and development, both through the European Union and through active participation in international organisations such as the United Nations. The Department is made up of a number of divisions and units: