Not to be confused with the anti-nuclear Plowshares Movement. 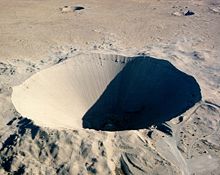 Project Plowshare was the overall United States term for the development of techniques to use nuclear explosives for peaceful construction purposes. The phrase was coined in 1961, taken from Micah 4:3 ("And he shall judge among the nations, and shall rebuke many people: and they shall beat their swords into plowshares, and their spears into pruning hooks: nation shall not lift up sword against nation, neither shall they learn war any more"). It was the U.S. portion of what are called Peaceful Nuclear Explosions (PNE).

There were many negative impacts from Project Plowshare’s 27 nuclear explosions.[1] Consequences included blighted land, relocated communities, tritium-contaminated water, radioactivity, and fallout from debris being hurled high into the atmosphere. These were ignored and downplayed until the program was terminated in 1977, due in large part to public opposition, after $770 million had been spent on the project.[1]

Project Carryall,[2] proposed in 1963 by the Atomic Energy Commission, the California Division of Highways (now Caltrans), and the Santa Fe Railway, would have used 22 nuclear explosions to excavate a massive roadcut through the Bristol Mountains in the Mojave Desert, to accommodate construction of Interstate 40 and a new rail line.[1] At the end of the program, a major objective was to develop nuclear explosives, and blast techniques, for stimulating the flow of natural gas in "tight" underground reservoir formations. In the 1960s, a proposal was suggested for a modified in situ shale oil extraction process which involved creation of a rubble chimney (a zone in the oil shale formation created by breaking the rock into fragments) using a nuclear explosive.[3] However, this approach was abandoned for a number of technical reasons. 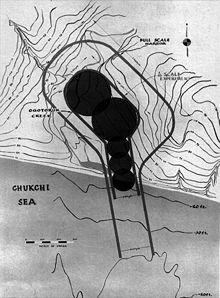 One of the Chariot schemes involved chaining five thermonuclear devices to create the artificial harbor.

One of the first plowshare nuclear blast cratering proposals that came close to being carried out was Project Chariot, which would have used several hydrogen bombs to create an artificial harbor at Cape Thompson, Alaska. It was never carried out due to concerns for the native populations and the fact that there was little potential use for the harbor to justify its risk and expense. A number of proof-of-concept cratering blasts were conducted; including the Buggy shot of 5 1-Kt-devices for a channel/trench in Area 21 and the largest being 104 kiloton (435 terajoule) on July 6, 1962 at the north end of Yucca Flats, within the Atomic Energy Commission's Nevada Test Site (NTS) in southern Nevada. The shot, "Sedan", displaced more than 12 million short tons (11 teragrams) of soil and resulted in a radioactive cloud that rose to an altitude of 12,000 ft (3.7 km). The radioactive dust plume headed northeast and then east towards the Mississippi River.

The first PNE blast was Project Gnome, conducted on December 10, 1961 in a salt bed 24 mi (39 km) southeast of Carlsbad, New Mexico. The explosion released 3.1 kilotons (13 TJ) of energy yield at a depth of 361 meters (1,184 ft) which resulted in the formation of a 170 ft (52 m) diameter, 80 ft (24 m) high (52 by 25 m) cavity. The test had many objectives. The most public of these involved the generation of steam which could then be used to generate electricity. Another objective was the production of useful radioisotopes and their recovery. Another experiment involved neutron time-of-flight physics. A fourth experiment involved geophysical studies based upon the timed seismic source. Only the last objective was considered a complete success. The blast unintentionally vented radioactive steam while the press watched. The partly developed Project Coach detonation experiment that was to follow adjacent to the Gnome test was then canceled.

Over the next 11 years 26 more nuclear explosion tests were conducted under the U.S. PNE program. Funding quietly ended in 1977. Costs for the program have been estimated at more than (US) $770 million.[1]

If it was successful, plans called for the use of hundreds of specialized nuclear explosives in the western Rockies gas fields. The previous two tests had indicated that the produced natural gas would be too radioactive for safe use. After the test it was found that the blast cavities had not connected as hoped, and the resulting gas still contained unacceptable levels of radionuclides.[4]

By 1974, approximately $82 million had been invested in the nuclear gas stimulation technology program. It was estimated that even after 25 years of gas production of all the natural gas deemed recoverable, that only 15 to 40 percent of the investment could be recovered.

Also, the concept that stove burners in California might soon emit trace amounts of blast radionuclides into family homes did not sit well with the general public. The contaminated well gas was never channeled into commercial supply lines.

The radioactive blast debris from 839 U.S. underground nuclear test explosions remains buried in-place and has been judged impractical to remove by the DOE's Nevada Site Office.

The situation remained so for the next three decades, but a resurgence in Colorado Western slope natural gas drilling has brought resource development closer and closer to the original underground detonations. By mid-2009, 84 drilling permits had been issued within a 3-mile radius, with 11 permits within one mile of the site.[5]

The U.S. conducted twenty-seven PNE shots in conjunction with other, weapons-related, test series.

There were many negative impacts from Project Plowshare’s 27 nuclear explosions:[1]

Project Gnome vented radioactive steam over the very press gallery that was called to confirm its safety. The next blast, a 104-kiloton detonation at Yucca Flat, Nevada, displaced 12 million tons of soil and resulted in a radioactive dust cloud that rose 12,00 feet and plumed toward the Mississippi River. Other consequences – blighted land, relocated communities, tritium-contaminated water, radioactivity, and fallout from debris being hurled high into the atmosphere – were ignored and downplayed until the program was terminated in 1977, due in large part to public opposition.[1]

Project Plowshare shows how something intended to improve national security can unwittingly do the opposite if it fails to fully consider the social, political, and environmental consequences. It also “underscores that public resentment and opposition can stop projects in their tracks”.[1]