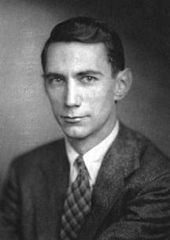 The fundamental problem of communication is that of reproducing at one point either exactly or approximately a message selected at another point.[1] Claude Elwood Shannon (1916-2001)

The origins of communication theory is linked to the development of information theory.[3] Limited information-theoretic ideas had been developed at Bell Labs, all implicitly assuming events of equal probability.

Harry Nyquist's 1924 paper, Certain Factors Affecting Telegraph Speed, contains a theoretical section quantifying "intelligence" and the "line speed" at which it can be transmitted by a communication system.

Ralph Hartley's 1928 paper, Transmission of Information, uses the word information as a measurable quantity, reflecting the receiver's ability to distinguish one sequence of symbols from any other. The natural unit of information was therefore the decimal digit, much later renamed the hartley in his honour as a unit or scale or measure of information.

Alan Turing in 1940 used similar ideas as part of the statistical analysis of the breaking of the German second world war Enigma ciphers.

The main landmark event that opened the way to the development of communication theory was the publication of an article by Claude E. Shannon in the Bell System Technical Journal in July and October 1948 under the title 'A Mathematical Theory of Communication.'[1]​ Shannon focused on the problem of how best to encode the information that a sender wants to transmit. He used also tools in probability theory, developed by Norbert Wiener. They marked the nascent stages of applied communication theory at that time. Shannon developed information entropy as a measure for the uncertainty in a message while essentially inventing the field of information theory.

In 1949 a declassified version of his wartime work on the mathematical theory of cryptography ('Communication Theory of Secrecy Systems',) he proved that all theoretically unbreakable ciphers must have the same requirements as the one-time pad. He is also credited with the introduction of sampling theory, which is concerned with representing a continuous-time signal from a (uniform) discrete set of samples. This theory was essential in enabling telecommunications to move from analog to digital transmissions systems in the 1960s and later.

In 1951, Shannon made his fundamental contribution to natural language processing and computational linguistics with his article 'Prediction and Entropy of Printed English' (1951), providing a clear quantifiable link between cultural practice and probabilistic cognition.

The studies on information theory by Claude Elwood Shannon, Warren Weaver and others, prompted research on new models of communication from other scientific perspectives like psychology and sociology. In science, a model is a structure that represents a theory.[4]

Scholars from disciplines different to mathematics and engineer began to take distance from the Shannon and Weaver models as a 'transmissible model':

They developed a model of communication which was intended to assist in developing a mathematical theory of communication. Shannon and Weaver's work proved valuable for communication engineers in dealing with such issues as the capacity of various communication channels in 'bits per second'. It contributed to computer science. It led to very useful work on redundancy in language. And in making 'information' 'measurable' it gave birth to the mathematical study of 'information theory'

Harold Lasswell (1902 - 1978), a political scientist and communication theorist, was a member of the Chicago school of sociology. In his work 'The Structure and Function of Communication in Society' (1948) he defined the communication process as Who (says) What (to) Whom (in) What Channel (with) What Effect.[6]

An article of Richard Whately (1787 - 1863), 'Rhetoric (1825), that appears as a contribution for Encyclopaedia Metropolitana, was adapted into a book in 1828 as 'Elements of Rhetoric'. In 1963 it was published by the Southern Illinois University under the title 'Elements of Rhetoric: Comprising an Analysis of the Laws of Moral Evidence',[7] with a critical introduction of Douglas Ehninger and a foreword by David Potter. They explored what they called the 'Aristotle's models of communication'. James L. Kinneavy (1920 - 1999) studied also the Aristotle's rhetoric and then his communication model.[8][9]

A simple communication model with a sender transferring a message containing information to a receiver.

There is an additional working definition of communication to consider[examples needed] that authors like Richard A. Lanham (2003) and as far back as Erving Goffman (1959) have highlighted. This is a progression from Lasswell’s attempt to define human communication through to this century and revolutionized into the constructionist model. Constructionists believe that the process of communication is in itself the only messages that exist. The packaging can not be separated from the social and historical context from which it arose, therefore the substance to look at in communication theory is style for Richard Lanham and the performance of self for Erving Goffman.

Lanham chose to view communication as the rival to the over encompassing use of CBS model (which pursued to further the transmission model). CBS model argues that clarity, brevity, and sincerity are the only purpose to prose discourse, therefore communication. Lanham wrote, “If words matter too, if the whole range of human motive is seen as animating prose discourse, then rhetoric analysis leads us to the essential questions about prose style” (Lanham 10). This is saying that rhetoric and style are fundamentally important; they are not errors to what we actually intend to transmit. The process which we construct and deconstruct meaning deserves analysis.

Erving Goffman sees the performance of self as the most important frame to understand communication. Goffman wrote, “What does seem to be required of the individual is that he learn enough pieces of expression to be able to ‘fill in’ and manage, more or less, any part that he is likely to be given” (Goffman 73) Goffman is highlighting the significance of expression. The truth in both cases is the articulation of the message and the package as one. The construction of the message from social and historical context is the seed as is the pre-existing message is for the transmission model. Therefore any look into communication theory should include the possibilities drafted by such great scholars as Richard A. Lanham and Erving Goffman that style and performance is the whole process.

Communication stands so deeply rooted in human behaviors and the structures of society that scholars have difficulty thinking of it while excluding social or behavioral events[weasel words]. Because communication theory remains a relatively young field of inquiry and integrates itself with other disciplines such as philosophy, psychology, and sociology, one probably cannot yet[update] expect a consensus conceptualization of communication across disciplines[weasel words].

Linear Model – is a one way model to communicate with others. It consists of the sender encoding a message and channeling it to the receiver in the presence of noise. Draw backs – the linear model assumes that there is a clear cut beginning and end to communication. It also displays no feedback from the receiver.

Interactive Model – is two linear models stacked on top of each other. The sender channels a message to the receiver and the receiver then becomes the sender and channels a message to the original sender. This model has added feedback, indicates that communication is not a one way but a two way process. It also has “field of experience” which includes our cultural background, ethnicity geographic location, extend of travel, and general personal experiences accumulated over the course of your lifetime. Draw backs – there is feedback but it is not simultaneous.

Inspection of a particular theory on this level will provide a framework on the nature of communication as seen within the confines of that theory.

Theories can also be studied and organized according to the ontological, epistemological, and axiological framework imposed by the theorist.

Ontology essentially poses the question of what, exactly, it is the theorist is examining. One must consider the very nature of reality. The answer usually falls in one of three realms depending on whether the theorist sees the phenomena through the lens of a realist, nominalist, or social constructionist. Realist perspective views the world objectively, believing that there is a world outside of our own experience and cognitions. Nominalists see the world subjectively, claiming that everything outside of one’s cognitions is simply names and labels. Social constructionists straddle the fence between objective and subjective reality, claiming that reality is what we create together.[unbalanced opinion][neutrality is disputed]

Epistemology is an examination of how the theorist studies the chosen phenomena. In studying epistemology, particularly from a positivist perspective, objective knowledge is said[who?] to be the result of a systematic look at the causal relationships of phenomena. This knowledge is usually attained through use of the scientific method[neutrality is disputed]. Scholars often think[weasel words] that empirical evidence collected in an objective manner is most likely to reflect truth in the findings. Theories of this ilk are usually created to predict a phenomenon. Subjective theory holds that understanding is based on situated knowledge, typically found using interpretative methodology such as ethnography and also interviews. Subjective theories are typically developed to explain or understand phenomena in the social world.[citation needed]

Axiology is concerned with how values inform research and theory development.[11] Most communication theory is guided by one of three axiological approaches . The first approach recognizes that values will influence theorists' interests but suggests that those values must be set aside once actual research begins. Outside replication of research findings is particularly important in this approach to prevent individual researchers' values from contaminating their findings and interpretations.[12] The second approach rejects the idea that values can be eliminated from any stage of theory development. Within this approach, theorists do not try to divorce their values from inquiry. Instead, they remain mindful of their values so that they understand how those values contextualize, influence or skew their findings.[13] The third approach not only rejects the idea that values can be separated from research and theory, but rejects the idea that they should be separated. This approach is often adopted by critical theorists who believe that the role of communication theory is to identify oppression and produce social change. In this axiological approach, theorists embrace their values and work to reproduce those values in their research and theory development.[14]

A discipline gets defined in large part by its theoretical structure[weasel words]. Communication studies often borrow theories from other social sciences[neutrality is disputed]. This theoretical variation makes it difficult to come to terms with the field as a whole[neutrality is disputed]. That said, some common taxonomies exist that serve to divide up the range of communication research. Two common mappings involve contexts and assumptions.

These "levels" of communication provide some way of grouping communication theories, but inevitably, some theories and concepts leak from one area to another, or fail to find a home at all.

Craig finds each of these clearly defined against the others, and remaining cohesive approaches to describing communicative behavior. As a taxonomic aid, these labels help to organize theory by its assumptions, and help researchers to understand why some theories may seem incommensurable.

Some realms of communication and their theories

There is a wealth of information

The following list is a survey of Communication Theory texts:

Scholarly journals are also a great source for recent research and academic discussion of theory. Some communication journals that emphasize theory are as follows: