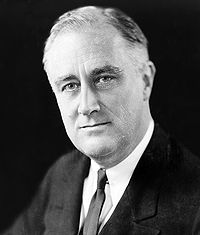 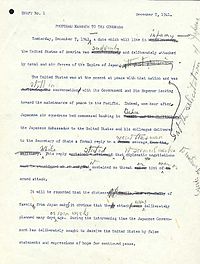 A first draft of the Infamy Speech, with changes by Roosevelt

The Presidential Address to Congress of December 8, 1941[1][2][3] (known as the Infamy Speech or Day of Infamy Speech[4][5]) was delivered at 12:30 p.m. that day to a Joint Session of Congress by United States President Franklin D. Roosevelt, one day after the Empire of Japan's attack on Pearl Harbor Naval Base, Hawaii. The name derives from the first line of the speech: Roosevelt describing the previous day as "a date which will live in infamy".

Within an hour of the speech, Congress passed a formal declaration of war against Japan and officially brought the U.S. into World War II. The address is regarded as one of the most famous American political speeches of the 20th century.[6] 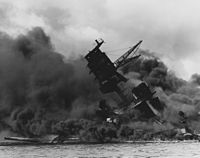 The wreckage of the USS Arizona ablaze after the attack.

FDR delivers the speech to Congress. Behind him are Vice President Henry A. Wallace (left) and Speaker of the House of Representatives Sam Rayburn. To the right, in uniform in front of Rayburn, is Roosevelt's son James, who escorted his father to the Capitol.

The Infamy Speech was brief, running to just six and a half minutes. Secretary of State Cordell Hull had recommended that the president devote more time to a fuller exposition of Japanese-American relations and the lengthy but unsuccessful effort to find a peaceful solution. However, Roosevelt kept the speech short in the belief that it would have a more dramatic effect.[7]

The wording of F.D.R's speech was intended to have a strong emotional impact, appealing to the anger felt by Americans at the nature of the Japanese attack. Roosevelt purposefully framed the speech around the perceived low moral character of the Japanese government. He drew a sharp contrast between the "righteous might" of the American people and the aggressive and deceitful nature of the Japanese regime. He deliberately avoided the Churchillian approach of an appeal to history. Indeed, the most famous line of the speech originally read "a date which will live in world history"; Roosevelt crossed out "world history" and replaced it with "infamy", as seen in the annotated copy of the original typewritten speech from the National Archives.[8][9]

His revised statement was all the stronger for its emphatic insistence that posterity would forever endorse the American view of the attack. It was intended not merely as a personal response by the president, but as a statement on behalf of the entire American people in the face of a great collective trauma. In proclaiming the indelibility of the attack and expressing outrage at its "dastardly" nature, the speech worked to crystallize and channel the response of the nation into a collective response and resolve.[10]

The first paragraph of the speech was carefully worded to reinforce Roosevelt's portrayal of the United States as the innocent victim of unprovoked Japanese aggression. The wording was deliberately passive. Rather than taking the more usual active voice—i.e. "Japan attacked the United States"—Roosevelt chose to put in the foreground the object being acted upon, namely the United States, to emphasize America's status as a victim.[11] The theme of "innocence violated" was further reinforced by Roosevelt's recounting of the ongoing diplomatic negotiations with Japan, which the president characterized as having been pursued cynically and dishonestly by the Japanese government while it was secretly preparing for war against the United States.[12]

Roosevelt consciously sought to avoid making the sort of more abstract appeal that had been issued by President Woodrow Wilson in his own speech to Congress[13] in April 1917, when the United States entered World War I. Wilson had laid out the strategic threat posed by Germany and stressed the idealistic goals behind America's participation in the war. During the 1930s, however, American public opinion had turned strongly against such themes and was wary of—if not actively hostile to—idealistic visions of remaking the world through a "just war". Roosevelt therefore chose to make an appeal aimed much more at the gut level—in effect, an appeal to patriotism rather than to idealism. Nonetheless, he took pains to draw a symbolic link with the April 1917 declaration of war; when he went to Congress on December 8, 1941 he was accompanied by Edith Bolling Wilson, the widow of the late president.[9]

The "infamy framework" adopted by Roosevelt was given additional resonance by the fact that it followed the pattern of earlier narratives of great American defeats. The Battle of the Little Bighorn in 1876 and the sinking of the USS Maine in 1898 had both been the source of intense national outrage and a determination to take the fight to the enemy. Defeats and setbacks were on each occasion portrayed as being merely a springboard towards an eventual and inevitable victory. As Professor Sandra Silberstein observes, Roosevelt's speech followed a well-established tradition of how "through rhetorical conventions, presidents assume extraordinary powers as the commander in chief, dissent is minimized, enemies are vilified, and lives are lost in the defense of a nation once again united under God."[14]

The overall tone of the speech was one of determined realism. Roosevelt made no attempt to paper over the great damage that had been caused to the American armed forces, noting (without giving figures, as casualty reports were still being compiled) that "very many American lives have been lost" in the attack. However, he emphasized his confidence in the strength of the American people to face up to the challenge posed by Japan, citing the "unbounded determination of our people". He sought to reassure the public that steps were being taken to ensure their safety, noting his own role as "Commander in Chief of the Army and Navy" (the United States Air Force was at this time part of the US Army) and declaring that he had already "directed that all measures be taken for our defense".

Roosevelt also made a point of emphasizing that "our people, our territory and our interests are in grave danger" and highlighted reports of Japanese attacks in the Pacific between Hawaii and San Francisco. In so doing, he sought to silence the isolationist movement which had campaigned so strongly against American involvement in the war in Europe. If the territory and waters of the continental United States—not just outlying possessions such as the Philippines—was seen as being under direct threat, isolationism would become an unsustainable course of action. Roosevelt's speech had the desired effect, with only one Representative voting against the declaration of war he sought; the wider isolationist movement collapsed almost immediately.

The speech's "infamy" line is often misquoted as "a day that will live in infamy". However, Roosevelt quite deliberately chose to emphasize the date—December 7, 1941—rather than the day of the attack, a Sunday, which he mentioned only in the last line when he said, "...Sunday, December 7th, 1941,...". He sought to emphasize the historic nature of the events at Pearl Harbor, implicitly urging the American people never to forget the attack and memorialize its date. Ironically, the misquoted term "day of infamy" has become widely used by the media to refer to any moment of supreme disgrace or evil.[15]

Roosevelt's speech had an immediate and long-lasting impact on American politics. Thirty-three minutes after he finished speaking, Congress declared war on Japan, with only one Representative, Jeannette Rankin, voting against the declaration. The speech was broadcast live by radio and attracted the largest audience in US radio history, with over 81 percent of American homes tuning in to hear the President.[7] The response was overwhelmingly positive, both within and outside of Congress. Judge Samuel Irving Rosenman, who served as an adviser to Roosevelt, described the scene:

The White House was inundated with telegrams praising the president's stance ("On that Sunday we were dismayed and frightened, but your unbounded courage pulled us together."[17]). Recruiting stations were jammed with a surge of volunteers and had to go on 24-hour duty to deal with the crowds seeking to sign up, in numbers reported to be twice as high as after Woodrow Wilson's declaration of war in 1917. The anti-war and isolationist movement collapsed in the wake of the speech, with even the president's fiercest critics falling into line. Charles Lindbergh, who had been a leading isolationist, declared:

Roosevelt's framing of the Pearl Harbor attack became, in effect, the standard American narrative of the events of December 7, 1941. Hollywood enthusiastically adopted the narrative in a number of war films. Wake Island, the Academy Award-winning Air Force and the films Man from Frisco (1944), and Betrayal from the East (1945), all included actual radio reports of the pre-December 7 negotiations with the Japanese, reinforcing the message of enemy duplicity. Across the Pacific (1942), Salute to the Marines (1943), and Spy Ship (1942), used a similar device, relating the progress of US–Japanese relations through newspaper headlines. The theme of American innocence betrayed was also frequently depicted on screen, the melodramatic aspects of the narrative lending themselves naturally to the movies.[19]

The President's description of December 7 as "a date which will live in infamy" was borne out; the date very quickly became shorthand for the Pearl Harbor attack in much the same way that September 11 became inextricably associated with the 2001 terrorist attacks. The slogans "Remember December 7th" and "Avenge December 7" were adopted as a rallying cry and were widely displayed on posters and lapel pins.[20] Prelude to War (1942), the first of Frank Capra's Why We Fight film series (1942–1945), urged Americans to remember the date of the Japanese invasion of Manchuria, September 18, 1931, "as well as we remember December 7th 1941, for on that date in 1931 the war we are now fighting began."[21] The symbolism of the date was highlighted in a scene in the 1943 film Bombardier, in which the leader of a group of airmen walks up to a calendar on the wall, points to the date ("December 7, 1941") and tells his men: "Gentlemen, there's a date we will always remember—and they'll never forget!"[22]

Sixty years later, the continuing resonance of the Infamy Speech was demonstrated following the September 11, 2001 attacks, which many commentators compared with Pearl Harbor in terms of its impact and deadliness.[23] In the days following the attacks, author Richard Jackson notes in his book Writing the War on Terrorism: Language, Politics and Counter-terrorism that "there [was] a deliberate and sustained effort" on the part of the George W. Bush administration to "discursively link September 11, 2001 to the attack on Pearl Harbor itself",[24] both by directly invoking Roosevelt's Infamy Speech[25] and by re-using the themes employed by Roosevelt in his speech. In Bush's speech to the nation on September 11, 2001, he contrasted the "evil, despicable acts of terror" with the "brightest beacon for freedom and opportunity" that America represented in his view.[26] University of Washington Professor and author Sandra Silberstein draws direct parallels between the language used by Roosevelt and Bush, highlighting a number of similarities between the Infamy Speech and Bush's presidential address of September 11.[14] Similarly, Emily S. Rosenberg notes rhetorical efforts to link the conflicts of 1941 and 2001 by re-utilizing Second World War terminology of the sort used by Roosevelt, such as using the term "axis" to refer to America's enemies (as in "Axis of Evil").[9]