The National Bus Company (NBC) was, from 1969 to 1988, a nationalised bus company in England and Wales. NBC did not run buses itself, but was the owner of a number of regional subsidiary bus operating companies.

Western National 1129 (XDV609S), a Bristol VR in the leaf green version of the NBC corporate livery 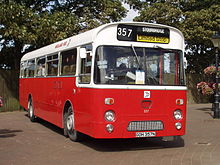 Following the Labour Party victory at the 1966 general election, Barbara Castle was appointed Minister for Transport. Castle immediately ordered a review of public transport, with a view to formulating a new transport policy.

Among the issues to be tackled were the ownership and operation of bus services, which were rapidly losing patronage and profitablity due to increased prevalence of private motor cars.[1] The state owned a considerable proportion of scheduled bus operators outside the major cities, having purchased the Tilling Group companies in 1949, subsequently placed under the ownership of the nationalised Transport Holding Company (THC).

Castle originally proposed forming regional transport authorities, which would take over the THC subsidiaries and municipal transport undertakings in their area, and would also have the power to acquire private bus operators.[1] However, in November 1967 British Electric Traction (BET) unexpectedly offered to sell its bus operations to the government.[2] BET, who had been the only major private bus operating group, received £35 million for its 25 provincial bus companies and 11,300 vehicles.[3] The deal meant that the state or municipal bus operators now operated some 90% of scheduled bus services in England and Wales.[1] Instead of forming the regional authorities, the government published a white paper proposing the merger of the two THC and BET organisations into a single National Bus Company.[4] [5]

The recommendations of the white paper formed part of the Transport Act 1968. The 1968 Act also nationalised bus operation in Scotland, where subsidiaries formed the Scottish Bus Group.

The National Bus Company was formed on 1 January 1969.

In 1970 the company was enlarged when it acquired the former country area buses of London Transport, the bus operations of the County Boroughs of Exeter and Luton and the Gosport & Fareham Omnibus Company.

Buses were operated by locally managed subsidiary companies with their own fleetnames and liveries. In the early years of the company there was some rationalisation, generally leading to the amalgamation of operators into larger units and the transfer of areas between them. One was the merging of Aldershot & District with Thames Valley in 1972. Another example was the transfer of the 'land-locked' Trowbridge operations from Western National to Bristol Omnibus in 1970.

In 1972 NBC introduced corporate images. Henceforward its coaches were branded as National Travel and painted in unrelieved white, with the NBC logo and the 'NATIONAL' name in alternate red & blue letters, being rebranded as National Express soon afterwards. The addition of blue and white stripes appeared first in 1978. National Travel was the country's first attempt at a uniformly marketable express network, which superseded both Associated Motorways and the plethora of other services provided by individual NBC subsidiaries. The coaches were managed by a small number of areas and included travel agent booking offices based at major bus stations. A hub and spoke system operated with the main hub at Cheltenham (though this did not serve the North of England very well).

Around the same time the company launched a wide number of UK holiday services under the banner NATIONAL HOLIDAYS.

This brand and its travel agent booking offices existed until the mid 1990s when the coach holiday division closed.

More recently the National Express overseas travel business has been relaunched recently under the name EUROLINES; this brand now operates services from the UK across Europe, booked through the main National Express website.

In the 1970s all local service buses adopted a uniform design, generally in either leaf green or poppy red, initially at any rate with white relief, and bearing the company fleetname in white with the new NBC "double-N" arrow logo. There were, however, exceptions: buses operating in the area of the Tyne and Wear Passenger Transport Executive became yellow in a similar fashion to the PTE's own fleet but to the NBC design; and Jones (Aberbeeg) (taken over in 1969) and Midland General, both initially liveried in blue, until 1980; plus the Northern General subsidiary, Sunderland District, where blue was retained for a short period.

Although NBC operated throughout England and Wales it was by no means in a monopoly position. As well as London Transport, which provided services in Greater London, and the fleets of the municipal bus companies and passenger transport executives, some rural areas and a few small towns were served by independent operators.

The NBC inherited from the THC 75% holdings in the bus manufacturers Bristol Commercial Vehicles and Eastern Coach Works. In 1969 NBC formed a joint venture with British Leyland (the 25% owner of Bristol and ECW), by means of which British Leyland became a 50% owner of the NBC's manufacturing companies. The joint venture designed and built a new single-deck bus, the Leyland National. The first bus was delivered in 1972, and it remained in production until 1986. The National was also available to other bus operators. In 1982 NBC sold its 50% interest in the joint venture (including Bristol and ECW) to BL.

In the late 1970s and early 1980s services were reviewed under a process known within instigator Midland Red as the Viable Network Project and subsequently more generally as the "Market Analysis Project" or MAP. Each company carefully considered its existing and potential new demands, surveyed both on and off bus, and recast local networks to reflect the results, indicating to local authorities those services requiring subsidy. As part of the MAP local area identities were invariably introduced, with new fleetnames applied to buses, bus stops, timetables and publicity. The process culminated in the splitting of several larger NBC subsidiaries.

From October 1986 buses were deregulated and progressively privatised, and the remaining larger companies were forcibly broken up. The sales spawned a renewed interest in individual liveries, and the "double-N" logo disappeared, except on express services (becoming the property of National Express). Most local companies passed from state control to their managers. The independence of many, however, was short lived, as they were acquired by the emerging large private bus groups, represented today by:

The original bus-operating subsidiaries of the National Bus Company in 1969 and 1970 were:

‡ Bristol Omnibus Company also operated city services in Bristol for Bristol Joint Services, a joint undertaking of the company and Bristol City Council. They also leased services from the county borough of Gloucester, buses in the city bearing a Gloucester fleetname and city coat of arms.

NBC pursued a policy of merging subsidiaries to form larger regional companies. At the same time some of its operations and depots passed to passenger transport executives. On 1 January 1972, North Western was split up: part going to the SELNEC PTE, the remainder to Crosville and Trent. In 1973 the operations of Midland Red within the area of West Midlands PTE passed to the executive.

By 1978 the following bus-operating companies existed:

In preparation for the introduction of bus deregulation in 1986, and for privatisation soon after, many of the companies were broken up into smaller units. In some cases the names of earlier companies - such as Wilts & Dorset or North Western - were revived, although often with quite different areas to their namesakes.

Two additional non-bus-operating subsidiaries were also disposed of in 1988:

The Scarborough operations of United passed to East Yorkshire Motor Services in September 1986.