A-Next is the Marvel Comics' MC2 universe version of the Avengers. The team made its first appearance in What If? #105, the first comic featuring Spider-Girl, and the team's origin story was told in the A-Next #1, cover dated October 1998.

The first issue of A-Next paid homage to The Avengers (vol. 1) #1, with an Asgardian menace prompting new superheroes to band together, all of them analogues to the original team. Future stories introduced new heroes and menaces, most of them based on pre-existing Marvel characters. Characters and story elements created by DeFalco in the comic were used in other comics in the MC2 Universe.

A five issue miniseries entitled Avengers Next ran from November 2006 to January 2007, written by Tom DeFalco and with artwork by Ron Lim, that followed on from the events of Last Hero Standing and Last Planet Standing. It reunited the remaining members of A-Next and added new members Sabreclaw, Kate Power (of Power Pack), Thena, the daughter of Thor and a former criminal teleporter called Warp to the team. 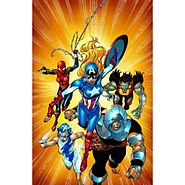 The new team comes together after an attack by Asgardian trolls on Avengers Museum, formerly Avengers Mansion, commanded by Loki, prompts the museum's caretaker, former butler Edwin Jarvis to send out a distress signal.

The summons is responded to by several heroes including Thunderstrike (Kevin Masterson, son of the original Thunderstrike, who was visiting the mansion at the time of the attack); Stinger (Scott Lang's daughter Cassie Lang, now an entomologist, who was testing Ant-Man's old uniform); Mainframe (a mysterious armored individual); J2 (Zane Yama, high school student and teenage son of the Juggernaut) and the adult Speedball, Jubilee and Jolt.

The heroes are transported to Asgard by Loki, who wants to retrieve the Thunderstrike mace's powers for himself, but Kevin disrupts the spell, absorbing the mace into himself and transforming into a new Thunderstrike in the process. Loki and the trolls are then defeated by the heroes, with assistance from Thor, now the King of Asgard. Thunderstrike, Stinger, J2 and Mainframe decide to stay together as the new Avengers. The adult heroes decline to stay with the reformed team.[1]

A downed Kree spaceship leads to the transformation of Bill Foster's son John into Earth Sentry, an analog of Captain Marvel.[2] Doc Magus, the new Sorcerer Supreme, then recruits the Avengers into fighting the reformed Defenders.[3]

Four new members are then inducted into the Avengers by Mainframe and Jarvis. The new members: American Dream, (a female analogue of Captain America); Freebooter (who modeled himself on Hawkeye and the Swordsman); Crimson Curse (an analogue to the Scarlet Witch) and Bluestreak (an analogue to Quicksilver); known collectively as the Dream Team, save N'kano, the Wakandan ambassador, from the racist Soldiers of the Serpent (an amalgam of the Sons of the Serpent and elements from the Egyptian god Set), with the assistance of the Coal Tiger, the son of the Black Panther.[4]

Afterwards, the team investigates the apparent return of Doctor Doom, who is revealed to be Kristoff Vernard in disguise.[5] The team is then attacked by Argo, who claims to be Hercules' son,[6] followed by an encounter with the villainous Ion Man, prompting Mainframe to reveal he is a sentient computer program based on Tony Stark's personality.[7]

The new Avengers then discover the Scarlet Witch in suspended animation in the mansion's subterranean levels, powering a gate to an alternate Earth.[8] After defeating the Soldiers of the Serpent again, with the help of Blacklight (the daughter of Monica Rambeau), the Avengers travel to the alternate dimension, which had been conquered by Red Skull after World War II, and was now ruled by the Skull's adopted son, Dr. Doom, who had murdered the Skull.[9] During the battle, they discover Captain America is alive and leading the resistance, and the Avengers help them defeat the Nazi forces, including the Thunder Guard, an alternate version of the Avengers.[10]

Thunderstrike elects to stay on the alternate Earth, and the remaining Avengers return to Earth, receiving a reprimand from Tony Stark and Clint Barton.[11] Immediately afterwards, they're attacked by a team of villains known as the Revengers, led by Red Queen and Big Man, the children of Hank and Janet Pym, out for revenge. The Avengers, alongside their reserve members Earth Sentry, Coal Tiger, Argo and Blacklight, defeat the Revengers.[12]

The team was occasionally seen aiding Spider-Girl, and also appeared during Last Hero Standing and Last Planet Standing. The team also made a cameo within Fantastic Five (vol. 2) #4, in which they were fighting one of the cosmic-powered Doombots.

The only minor in the team, Zane Yama is a 15-year-old high school student and the son of the original Juggernaut (Cain Marko) and district attorney Sachi Yama. Picked on by bullies at school, he recently manifested the ability to grow to a huge size, in which he gains super strength and invulnerability. His uniform, which includes his father's favorite flannel shirt tied around his waist over his armor, manifests itself automatically upon metamorphosis. He can only stay this way for about an hour.

Mainframe is a self-aware computer program, created by Tony Stark, which inhabits a series of identical armors. When an armor is damaged or destroyed, he simply transfers his consciousness to another body. His robot body utilizes Stark technology similar to the one found in the Iron Man armor. His personality is based on his creator's, possibly created by the same process as the Vision's.

Dr. Cassandra Lang is the daughter of the second Ant-Man, Scott Lang. Although she is the oldest member, in her mid-20s, and the only one on the team with a professional life and a scientific background, she is still doted on by her father, who constantly worries about her new-found superhero life. She possesses many abilities originally engineered by Henry Pym, including resizing, flying, communication with insects and artificial "stingers", all based on her costume and helmet.

18-year-old Kevin Masterson is the son of the original Thunderstrike. He absorbed his father's mace into his body, and has gained the ability to produce "thunderclaps"; bursts of concussive force from his hands. He can use them to simulate super strength or to propel him in huge Hulk-like leaps. Although he doesn't possess real super strength, he has limited invulnerability. In his civilian identity, he is a college student.

The Dream Team is a fictional group of heroes in the Marvel Comics MC2 universe. They first appeared in A-Next #4, and are based upon the "kooky quartet" of replacement Avengers introduced in Avengers Vol 1 #16. In their first appearance, Mainframe accepts them as members of the Avengers without consulting the existing members. There is therefore initially some antagonism between the original A-Next team and the Dream Team. The team roster comprises:

Shannon Carter is the niece of Sharon Carter. Her uniform is visually based on Captain America's and includes a set of stun discs (similar to Nomad's) that can be thrown against an opponent. She does not possess any powers, but is an Olympic-level athlete, a skilled fighter and a strategist. American Dream was later rewarded for her dedication by receiving the shield of an alternate-reality Captain America after saving that world from destruction.[11]

Blue Kelso is impatient and a person who likes to get to the point.[13] Bluestreak has powers to match her nature, namely superspeed. She was once affiliated with the X-People, successor to the X-Men, though she joined the Avengers once she realized she wouldn't get much publicity.

Aerika Harkness is related to the witch Agatha Harkness, former teacher to the Scarlet Witch. Like her ancestor, she possesses control over magical energies, although the exact nature of those energies is not known. They appear similar to the way the Scarlet Witch's powers were originally portrayed, and she appears to control them with relative ease. She died stopping an alternate Doctor Doom from attempting to use the Cosmic Cube to invade the Avengers' Earth.[10]

Brandon Cross was trained by Hawkeye and has shown proficiency with a variety of weapons as well as athletic skills. His costume takes visual cues from both Hawkeye and the Swordsman. Freebooter was romantically linked to Crimson Curse.

Kate Power was originally known as Energizer, the youngest member of Power Pack, a team of pre-teen superheroes made up of herself and her three siblings who gained their powers from a Kymellian named Aelfyre Whitemane. Her abilities involve disintegrating matter, absorbing its energy into herself and unleashing the energy as powerballs. Kate joined the Avengers after Franklin Richards recommended Kate to them in their search for Thunderstrike.[14]

Hudson Logan is the son of Wolverine and half-brother to Wild Thing. He possesses claws and a healing factor similar to Wolverine's. He was once a member of the Revengers, but joined the Avengers when he claimed to have reformed.[15]

The daughter of Thor. She came to Earth searching for Kevin Masterson, sent by her father to restore his powers. Initially, she showed great dislike for J2, especially after she broke her hammer on his helmet, and her strongest blows had no effect on him. After J2 saved her from Sylene's cauldron, though, she warmed up to him considerably, even giving him a kiss.

A thief with the power to teleport. He originally worked for Sylene (the daughter of Loki) and Ulik, but when he learned that they planned to turn Earth into a new version of Asgard, he defected to the Avengers.

The son of Hercules.

The Daughter of Photon.

The son of Black Panther.

The son of the second Giant-Man, Bill Foster.

The daughter of Spider-Man.