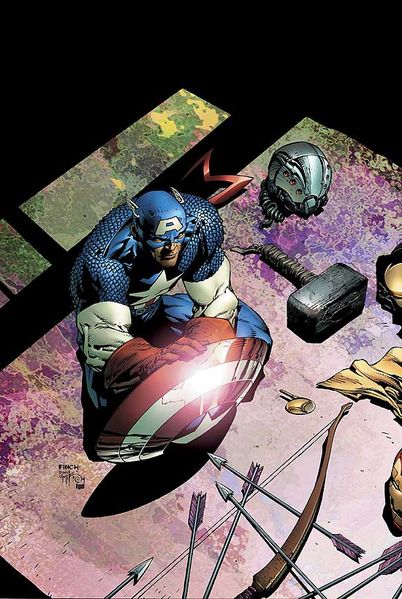 "Avengers Disassembled", referred to in some participating series as "Disassembled", is a crossover event between several series. The general idea is that the major heroes (the Avengers, , and the ) are assaulted, not just physically, but emotionally. Author said in an article in that the one thing that separates this crossover from others is that "not everyone is coming back from this one." The "Disassembled" tag is a reference to the Avengers' rallying cry, "Avengers Assemble!".

The active members of the Avengers team during the events of "Chaos" (the "Avengers" portion of "Avengers Disassembled") were Ant-Man II, , Captain Britain III (Kelsey Leigh), Falcon, Hawkeye, , , , Vision, Wasp and Yellowjacket.

The story begins when the sensors warn the residing Avengers of an intruder, quickly identified as , who had died saving the life of Ant-Man's daughter Cassie Lang. Jack inexplicably detonates, killing Ant-Man (Scott Lang) in a blast that destroys half of the mansion. The Vision crashes a Quinjet onto the site, only to attack the survivors of the explosion, carrying a small army of robots which attack the survivors. During this attack, goes into a frenzy, resulting in her tearing Vision apart. In the aftermath of this first wave of attacks, most of the previous Avengers (even reserve members such as and Daredevil) arrive at the mansion. Having already gone from bad to worse, things now go from worse to terrible as an enormous battlefleet of alien warships appear in the skies and begin wreaking havoc. Finally, a wounded Hawkeye sacrifices his life to save his friends by destroying an invading warship.

In the end, it is revealed that the Scarlet Witch was behind these seemingly random attacks. She had been driven insane by the loss of her children years earlier; the children who actually had been magical constructs the Witch had subconsciously created from the essence of the demon Mephisto. Due to the use of her powers causing subtle 'reality warps' whenever she uses them to any great extent, continued use of her powers has driven her increasingly closer to insanity, until, finally, she has gone insane, believing that the Avengers 'took' her children away from her, and seek to do so again. In a final confrontation, the Avengers - aided by - manage to stop Wanda, and she is subsequently taken away by her father Magneto, who acknowledges the mistakes he made in raising her.

A few months later, the Avengers team gather in the remains of the mansion. Quicksilver explains what has happened to his sister (the Scarlet Witch), and reveals that the Avengers cannot come back together due to a lack of necessary funds to repair such a high level of disaster. As the Avengers part company, they all discuss some of their favourite moments in Avengers history, such as when they first came together, when they discovered Captain America, the , the marriage of the Vision and the Scarlet Witch, the fight with , and the Ultron Unlimited crisis. As the team splits up, they are greeted by a large crowd of civilians, all of them thanking the Avengers for what they have done over the years.

In the wake of "Avengers Disassembled", two new Avengers series were created. The "New Avengers" title replaced the "Avengers" title (with a new #1 in December 2004) which ended with issue #503 and "Avengers Finale" (November 2004). This new title continued with the creative team of writer and artist . The other title, premiering February 2005, was "", which featured teenage heroes, each of whom (excepting Hawkeye) related in some way to the legacy of the Avengers. This series was written by , a writer for "", with art by . It is currently on hiatus.

The Scarlet Witch's storyline continued in the pages of "Excalibur", where Magneto and tried helping her, to no avail. This in turn led into the "" mini-series and crossover, also written by Bendis.

The event is now considered by Marvel editors as the first part of a trilogy of summer events, with "" as the second part. The final part of the trilogy is Marvel's "" mini-series, written by Brian Michael Bendis.

On , Marvel released a "What If?" special showing a different outcome to the storyline. In this alternate reality, the Beast, sensing something wrong, investigates afterward. He and Warbird go to see Dr. Strange who claims to have no knowledge of what occurred. Strange uses his abilities to see the event, claiming that is not really him ("Of course there's chaos magic...I would never use the Eye that way."). They deduce that Wanda used her magics to make everyone believe Strange had defeated her and Magneto then took her away. The Beast eventually figures out that Captain America, his mind suffering long-term damage from his years in ice, had pushed Wanda to do this, using the deaths to power her. They remake Genosha into a mutant paradise and Magneto fights to defend his daughter from the Avengers and the X-Men, who all end up dead as the Scarlet Witch's spell is interrupted by Rogue. In the end, Wanda and Cap allow themselves to be taken to oblivion to stop any more harm being done. Only Rogue, , Beast, Falcon, Cyclops, and Doctor Strange are left - they were the ones who were directly confronting Cap and Wanda - and a guilt-ridden Beast realizes that he should have left everything alone.

*In the opening sequence of "Avengers" #500, Kelsey Leigh is not in her Captain Britain costume, though her identity is secret from all but the Scarlet Witch. Presumably, she must have revealed her identity to her teammates prior to the start of the issue. When she does change into costume, it takes no time at all: in one panel she's as Kelsey, in the very next, only a second or so later, she is Captain Britain.

*Hawkeye's failure to stand by Iron Man when asked about his apparent return to alcoholism is unusual, although his actions may have been influenced by the Scarlet Witch.

*On the last page of "Avengers" #501 and first page of "Avengers" #502, is shown amongst a group of gathered former Avengers. Jessica Drew was never a member of the Avengers so her presence is a mystery. , the second Spider-Woman, is not shown even though she was a member of the West Coast Avengers. It can be assumed that Jessica Drew was mistakenly drawn in the place of Julia Carpenter.

*Dr. Strange's comment that there is no such thing as "Chaos Magic" is a surprise, as Strange himself used it as his primary source of power for a time, and has seen Chaos Magic used on several other occasions. This comment also seems to fly against various important storylines involving the Witch from much of 's and 's runs as writers on "Avengers" (vol. 3), including when she uses her magics against the in the "New World Order" storyline and to stop a bio-plague in the "Red Zone" storyline.

*It has been shown, especially immediately after the event in "Avengers West Coast", that Wanda does indeed remember her children having existed and the events surrounding their disappearing; her memory was removed by Agatha Harkness, but was later restored, as revealed in a subsequent "Avengers West Coast Annual".

*Quicksilver is present during the battle with the Kree yet states he was somewhere else during the events of the day and was not aware of what Wanda had done until later in "Avengers Finale". He himself states that his presence in the battle was likely due to his sister's power.

*Spider-Man is shown during the fight with the Kree & when Dr. Strange reveals the one responsible for everything that has happened to the Avengers, but in New Avengers #42, Spider-Man is shown to have no knowledge of what was the cause of the attack.

Although not bannered as a part of the crossover, the events of "" are a direct sequel to the story in "Thor".

Although not directly connected with the previous storyline, Bendis's 5th arc on "New Avengers" is titled "New Avengers: Disassembled", a reference to "Avengers: Disassembled". It deals with the events of the Civil War (in which superheroes were forced to register with the government or be arrested) on the Avengers, and how the team's varying opinions have caused them to break apart. The first three issues featured Captain America's, Jessica Drew's and Luke Cage's opinions on the matter, all who have heavily weighed against the registration. The next two featured the Sentry and Iron Man, both of whom were for registration.

The "GLA" miniseries, "GLA: Misassembled" (), written by and pencilled by , provided a reference to "Avengers Disassembled". In a move which satirized the s in that book, it was announced that a character would die in each "GLA" issue. Surely enough, Dinah Soar, Grasshopper, Monkey Joe, and Doorman are all killed, and commits . However, Doorman was resurrected almost immediately, and Mr. Immortal stayed dead for only a few seconds.

*Deadpool (to ): "Dude, "anyone" wearing a harness rig has a failsafe release to prevent it from catching on fire and forcing you to fly into spaceships and blow up. I mean, "duh", who "doesn't" know that?"