Musashi (武蔵?), named after the ancient Japanese Musashi Province, was a battleship of the Imperial Japanese Navy during World War II and flagship of the Japanese Combined Fleet. She was the second ship of the Yamato-class. She and her sister ship, Yamato, were the heaviest and most powerfully armed battleships ever constructed [5], displacing 72,800 long tons (74,000 t) fully loaded, and armed with nine 46 cm (18.1 in) main guns.

Constructed from 1938–1941 and formally commissioned in the summer of 1942, Musashi served as the flagship of Admirals Isoroku Yamamoto and Mineichi Koga in 1943. Throughout 1943, Musashi remained within the naval bases at Truk Lagoon, Kure, and Brunei, transferring between them several times in response to American airstrikes on Japanese island bases. Musashi was sunk on 24 October 1944 by American carrier aircraft during the Battle of Leyte Gulf.

Musashi was the second of the Yamato-class battleships designed by the Imperial Japanese Navy in 1937.[2][6] Musashi and her sister ships were built to be capable of engaging several opposing capital ships simultaneously, as a method of compensating for Japan's inability to industrially match the United States Navy.[N 1] With each of the Yamato class battleships displacing well over 70,000 long tons (71,000 t), it was hoped that the firepower of Musashi and her sister-ships could offset American industrial power.[6]

In consideration of Musashi's projected mass, the construction slipway was fortified, nearby workshops were expanded, and two floating cranes were constructed from scratch.[4][8] The keel of Musashi was laid down 29 March 1938 at Mitsubishi's Nagasaki shipyard, and was designated "Battleship No. 2".[2][9] Throughout construction, strategically placed warehouses and several large hanging blinds made of hemp rope weighing 408 t (450 short tons) prevented outsiders from viewing construction.[4][10][11][N 2][10] The deceptions were so successful that the American Consulate—located across the bay from Musashi's construction site—was unaware of her existence during the construction.[4]

Launching the Musashi presented its own special set of issues. The ship's 4 m (13 ft 1 in) thick launch platform, made of nine 44 cm (17 in) Douglas-fir planks bolted together, took two years to assemble (from keel-laying in March 1938) because of the inherent difficulty in drilling perfectly straight bolt holes through four meters of fresh timber.[12] The problem of slowing and stopping the massive hull once inside the narrow Nagasaki Harbor was addressed by attaching 570 t (630 short tons) of heavy chains divided evenly between each side of the hull to create dragging resistance in the water.[13] Finally, the launch, like the ship itself, had to be concealed from prying eyes; the most important means of accomplishing this was a citywide air-raid drill staged on the launch day to keep everyone inside their homes.[14] Musashi was successfully launched on 1 November 1940, coming to a stop only 1 m (3 ft) in excess of the hull's calculated 220 m (720 ft) travel distance across the harbor.[15] The entry of such a large mass into the water caused a 120 cm (3 ft 11 in)-high tsunami, which propagated throughout the harbor and up the local rivers, flooding homes and capsizing small fishing boats.[16] Musashi was fitted out at nearby Sasebo, with Captain (later Vice Admiral) Kaoru Arima assigned as her Chief Equipping Officer.[2][9]

Towards the end of fitting out, the ship's flagship facilities, including those on the bridge and in the admiral's cabins, were subjected to change orders stemming from Combined Fleet's desire to have the ship equipped as the flagship of the Commander-in-Chief, as the Yamato was too far along for such changes. These alterations, along with improvements in the secondary battery armor, pushed back completion and pre-handover testing of the Musashi by two months, to August 1942.[17]

Musashi's main battery consisted of nine 46 cm (18.1 in) Type 94 naval guns—the largest caliber of naval rifle artillery ever fitted to a warship.[18] Each gun was 21.13 m (69 ft 4 in) long, 147.3 t (162.4 short tons) in weight, and was capable of firing high-explosive or armor-piercing shells 42 km (23 nmi; 26 mi).[N 3] The guns and their turrets were built at the Kure Naval Arsenal and were transported to Nagasaki by the cargo ship Kashino, which had been specifically built for this purpose.[19]

On 5 August 1942, Musashi was commissioned at Nagasaki with Arima Kaoru assigned as Captain; she joined Yamato, Nagato, and Mutsu in the 1st Battleship Division the same day.[2][9] From 3–28 September 1942, Musashi was fitted with her secondary armament, consisting of twelve 127 mm guns, thirty-six 25 mm guns, and four 13.2 mm (0.52 in) anti-aircraft machine guns, as well as additional radar equipment.[2]

Throughout October and November, Musashi carried out trials and gunnery-drills near Kure.[21] In December 1942, following aircraft drills with the aircraft carrier Zuikaku, Musashi was declared operational.[2]

1943: Flagship of the Combined Fleet

On 18 January 1943, Musashi departed Kure for Truk Lagoon, arriving four days later. On 11 February, Musashi replaced her sister ship Yamato as flagship of the Combined Fleet under Admiral Isoroku Yamamoto.[2] On 1 April, Yamamoto departed Musashi and flew to Rabaul, New Britain to personally direct "Operation I-Go", a Japanese air offensive in the Solomon Islands.[22] Fifteen days later, acting on codes deciphered by Ultra, Yamamoto was killed when his aircraft was shot down by American P-38 Lightning fighter aircraft while he was en route from New Britain to Ballale, Bougainville.[22] On 23 April, Yamamoto's cremated remains were taken to Truk and placed in his cabin on-board Musashi where other Combined Fleet officers visited and paid their respects.[22] 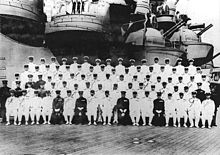 On 17 May, in response to American attacks on Attu Island, Musashi—along with two light carriers, nine destroyers, and two cruisers—was deployed to the northern Pacific.[2] When no contact was made with American forces, Musashi traveled to Japan and delivered Yamamoto's ashes to Kure on 23 May, where they were taken from the vessel in preparation for a formal state funeral.[23] Immediately afterwards, Musashi joined a significantly larger force to counterattack American naval forces off Attu. However, Attu fell before the force could be fully deployed, so the counterattack was abandoned and Musashi returned to Japan.[2]

On 24 June, while undergoing overhauling and repairs at Yokosuka Naval Arsenal, Musashi was visited by Emperor Hirohito and other high-ranking naval officials.[2] Transferring to Kure on 1 July, Musashi drydocked the same day. From 1–8 July, Musashi was upgraded with improved firing control and radar. Following several transfers between the Home Islands bases, Musashi deployed to Truk on 31 July, arriving six days later.[2]

On 18 September, Musashi sortied from Truk alongside three other battleships in response to American raids on Eniwetok and Brown Island.[24] Seven days later, the fleet returned to Truk after failing to come in contact with American forces. In October, in response to suspicions of planned American raids on Wake Island, Musashi led a large fleet under Admiral Mineichi Koga—three fast carriers, six battleships, and 11 cruisers—to intercept American carrier forces. When no contact was made, the fleet returned to Truk on 26 October.[2] She spent the remainder of 1943 in Truk Lagoon; as her previous captain was promoted, Captain Asakura Bunji assumed command of Musashi on 7 December.[2]

Musashi remained in Truk Lagoon until 10 February 1944, when she returned to Yokosuka alongside three smaller vessels. On 24 February, Musashi departed Yokosuka with two specialized army battalions and their munitions for Palau.[2] On the same day she departed Japan, Musashi's battlegroup encountered a typhoon, during which most of the battleship's deck cargo was lost.[2] Musashi arrived at Palau on 29 February and remained at the base for the next month. On 29 March, in anticipation of American air-raids on the island, Musashi departed Palau under the cover of darkness.[2] Almost immediately after leaving Palau, Musashi and her escorts were attacked by the American submarine USS Tunny, which fired six torpedoes at the battleship.[25] However, Musashi's escorts spotted the torpedo-wakes, and the battleship was able to evade five of the six torpedoes. One struck near the bow, flooding the hydrophone compartment and causing 18 casualties.[25]

In May 1944, Musashi departed Kure for Okinawa, then for Tawitawi alongside the Japanese Second Fleet under the command of Vice-Admiral Jisaburō Ozawa. On 10 June, Musashi departed Tawitawi for Biak with the intention of counter-attacking the American invasion of the island.[26] Two days later, when word reached Ozawa of American attacks on Saipan, the Second Fleet diverted from Biak to the Mariana Islands.[26] During the Battle of the Philippine Sea, Musashi escorted fast carriers of the Japanese Second Fleet.[27] Following Japan's disastrous defeat in the battle (also known as the Great Marianas Turkey Shoot, with some 450 aircraft and two fast carriers lost), the Second Fleet returned to Japan. On 10 July, Musashi departed Okinawa for Singapore, alongside her sister ship Yamato.[2]

Musashi under attack by American carrier aircraft during the Battle of Leyte Gulf.

On 18 October, Musashi joined the main Japanese fleet in Brunei in preparation for "Operation Sho-1", the counterattack planned against the American landings at Leyte.[28] The Japanese plan called for Ozawa's carrier forces to lure the American carrier fleets north of Leyte so that the Central Force—under Vice-Admiral Takeo Kurita—could enter Leyte Gulf and destroy American forces landing on the island.[28] With this objective, five battleships—including Musashi—and 10 heavy cruisers departed Brunei for the Philippines on 20 October.[2]

Soon after the Japanese force had departed from Brunei, two American submarines torpedoed and sank two of Kurita's heavy cruisers, including Kurita's flagship Atago, forcing Kurita to transfer his flag to Yamato.[29] On 24 October, while transiting the Sibuyan Sea, Kurita's Central Force came under heavy air attack by five separate strikes of American carrier task forces.[30] Early in the assaults, American carrier pilots—primarily from USS Essex, Franklin and Intrepid—learned to capitalize on Musashi's armor deficiencies near the bow, heavily damaging the battleship in the first three raids and forcing her to slow to 10 kn (12 mph; 19 km/h).[30] When it became apparent that the ship could not sustain further damage, her captain—Rear Admiral Toshihira Inoguchi—attempted to run her aground on a nearby island.[31] Despite his intent, Musashi sank at 19:36,[2] overwhelmed by 17 bombs and 19 torpedoes;[31] a large underwater explosion soon followed.[32] Out of a crew of 2,399, 1,023 men died; the remainder rescued by Japanese destroyers several hours later.[31] Eighteen American aircraft were lost in the attack.