In Cold Blood is a 1966 book by American author Truman Capote detailing the brutal 1959 murders of Herbert Clutter, a successful farmer from Holcomb, Kansas, his wife and two of their four children. Two older daughters no longer lived at the farm and were not there at the time of the murders. When Capote learned of the quadruple murder, before the killers were captured, he decided to travel to Kansas and write about the crime. He was accompanied by his childhood friend and fellow author Harper Lee, and together they interviewed local residents and investigators assigned to the case and took thousands of pages of notes. The killers, Richard "Dick" Hickock and Perry Smith, were arrested some six weeks after the murders, and Capote ultimately spent six years working on the book. The book became the greatest crime seller at the time.

Some critics consider Capote's work the original non-fiction novel, although other writers had already explored the genre, such as Rodolfo Walsh in Operación Masacre. The book examines the complex psychological relationship between two parolees who together commit a mass murder. Capote's book also explores the lives of the victims and the effect of the crime on the community where they lived. In Cold Blood is regarded by critics as a pioneering work of the true crime genre.

Overview of the crime

Herbert Clutter was a devout Methodist and a widely respected self-made man, who had established a successful and very prosperous farm from modest beginnings. Morally strict and conservative, he employed as many as 18 farm hands, and former employees reportedly admired and respected him for his fair treatment and good wages. His four children—three girls and a boy—were also widely respected in the community. The elder daughters, Eveanna and Beverly, had moved out of their parents' home and started their adult lives. The two younger children, Nancy, 16, and Kenyon, 15, were high school students living at home. Clutter's wife, Bonnie, a member of the local garden club, had been incapacitated by clinical depression and physical ailments since the births of her children, although this characterization of her has been disputed by surviving family members.

Two ex-convicts on parole from the Kansas State Penitentiary, Richard "Dick" Hickock and Perry Edward Smith, committed the robbery and murders on November 15, 1959. While in jail, a fellow prisoner, Floyd Wells, had told Hickock about a safe at the farmhouse where Herb Clutter kept large amounts of cash. Hickock soon hatched the idea to commit the robbery, leave no witnesses, and start a new life in Mexico with the cash. Hickock described his plan as "a cinch, the perfect score." Hickock later contacted Smith, his former cellmate, about committing the robbery with him. [1] The information from Wells proved to be false, since Herb Clutter did not keep cash on hand, had no safe, and did all his business by check, the better to keep track of transactions.

After driving across the state of Kansas on November 14, 1959, Hickock and Smith located the Clutter home and entered while the family slept. After they roused the family and discovered that there was no money to be found, Smith, notoriously unstable and prone to violent acts in fits of rage, slit Herb Clutter's throat, and then shot him in the head. As Smith recounted later, "I didn't want to harm the man. I thought he was a very nice gentleman. Soft spoken. I thought so right up to the moment I cut his throat."[2] Kenyon, then Nancy, and then Bonnie were murdered, each by single shotgun blasts to the head.

Smith claimed in his oral confession that Hickock murdered the two women. When asked to sign his confession, however, Smith refused. He wanted to accept responsibility for all four killings because, he said, he was "sorry for Dick's mother." Smith added, "She's a real sweet person."[3] Hickock always maintained that Smith committed all four killings.

On the basis of a tip from Wells, who contacted the prison warden after hearing of the murders, Hickock and Smith were identified as suspects and arrested in Las Vegas on December 30, 1959. They pleaded temporary insanity at the trial, but local GPs evaluated the accused and pronounced them sane. After five years on death row, Smith and Hickock were executed by hanging just after midnight on April 14, 1965, in Lansing, Kansas, at the Kansas State Penitentiary (now known as Lansing Correctional Facility). The gallows from which they were hanged now forms part of the collections of the Kansas State Historical Society. 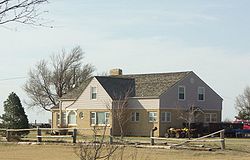 Clutter family home in Holcomb, Kansas. The home is privately owned and not open to the public. (Photographed March 2009.)

On November 16, 1959, The New York Times published an account of the murders, which began:

Holcomb, Kan., Nov. 15 [1959] (UPI) -- A wealthy wheat farmer, his wife and their two young children were found shot to death today in their home. They had been killed by shotgun blasts at close range after being bound and gagged ... There were no signs of a struggle, and nothing had been stolen. The telephone lines had been cut.
—The New York Times[4]

This 300-word article interested Capote enough for him to travel to Kansas to investigate the murders. Capote brought his childhood friend Harper Lee (who would later win the Pulitzer Prize for Fiction for her novel To Kill a Mockingbird) to help gain the confidence of the locals. Capote did copious research for the book, ultimately compiling 8,000 pages of notes.[5] After the criminals were found, tried, and convicted, Capote conducted personal interviews with both Smith and Hickock. Smith especially fascinated Capote; in the book he is portrayed as the more sensitive and guilt-ridden of the two killers. Rumors of a romantic and even sexual relationship between Smith and Capote still linger to this day.[4] The book was not completed until after Smith and Hickock were executed.

An alternate explanation for Capote's interest holds that The New Yorker presented the Clutter story to him as one of two choices for a story, the other being to follow a Manhattan cleaning woman on her rounds. Capote supposedly chose the Clutter story believing it would be the easier assignment.[6] Capote would later write a piece about following a cleaning woman, "A Day's Work", included in his book Music for Chameleons.

In Cold Blood was first published as a four-part serial in The New Yorker, beginning with the September 25, 1965, issue. The piece was an immediate sensation, particularly in Kansas, where The New Yorker had distributed the usual number of copies, which sold out immediately. In Cold Blood was first published in book form by Random House in January 1966.[7] The book, however, was copyrighted in 1965, and this date appears on the title page of most printings of the book and even in some library indices as the original publication date. The Library of Congress lists 1966 as the publication date and 1965 as the copyright date.[8]

The cover was created by S. Neil Fujita and features a hat pin with what appeared originally as a red drop of blood at its top end. After Capote saw the design, he requested that the drop be made a deeper shade of red to represent the passage of time since the incident. A black border was added to the ominous image.[9]

Tom Wolfe wrote in his essay "Pornoviolence": "The book is neither a who-done-it nor a will-they-be-caught, since the answers to both questions are known from the outset ... Instead, the book's suspense is based largely on a totally new idea in detective stories: the promise of gory details, and the withholding of them until the end."[10]

Despite the book's billing as a factual "True Crime" account, critics have challenged the authenticity of the book, arguing that Capote changed facts to suit his story, added scenes which had never occurred, and re-created dialogue.[11]

The book itself was made into a 1967 film of the same name by Richard Brooks, who directed and adapted the screenplay. It starred Robert Blake as Perry Smith and Scott Wilson as Richard Hickock. John Forsythe played the investigator (Al Dewey) from the Kansas Bureau of Investigation who apprehended the killers. The film was shot in black and white. It was nominated for four Academy Awards: Best Director, Best Original Score, Best Cinematography[12] and Best Adapted Screenplay. The film was also adapted into a 1996 miniseries starring Anthony Edwards, Eric Roberts and Sam Neill, portraying, respectively, Hickock, Smith and Alvin Dewey.

The story of Capote's experiences in writing the story and his subsequent fascination with the murders has been adapted into films twice. Capote (2005) starred Philip Seymour Hoffman, who won the Academy Award for Best Actor for his portrayal of Truman Capote, and Catherine Keener as Harper Lee. The film was critically acclaimed and was nominated for four other Oscars, including Best Picture, Best Supporting Actress (Keener), Best Director (Bennett Miller), and Best Adapted Screenplay (Dan Futterman).[13] A year later the film Infamous, starring Toby Jones as Capote, Daniel Craig as Smith, and Sandra Bullock as Lee, was released to favorable reviews.[14]

Failing Kansas, a totalist opera by Mikel Rouse, is based on the same events as In Cold Blood. Oni Press published a graphic novel, Capote in Kansas by Ande Parks and Chris Samnee, in 2005.[12]

A song called "The Corner", written about the events in the book, was included on the 2008 album Stay Down by the Chicago rock band Smoking Popes.