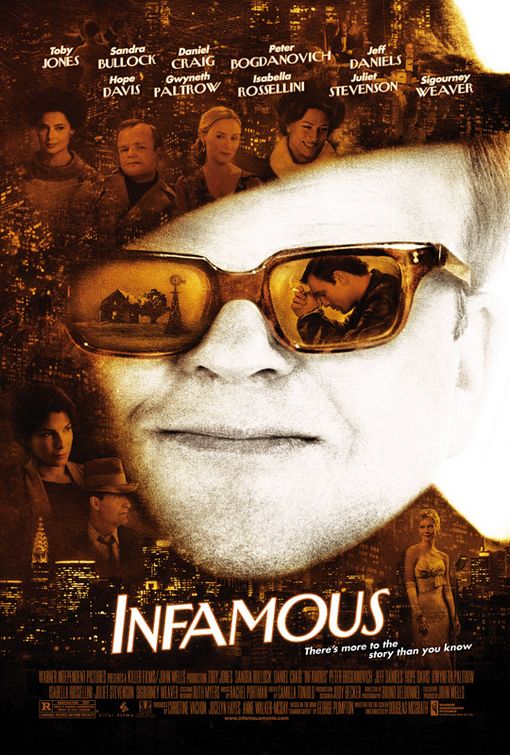 "Infamous" is a 2006 American written and directed by . The , based on the 1997 book "Capote: In Which Various Friends, Enemies, Acquaintances and Detractors Recall His Turbulent Career" by , covers the period from the late 1950s through the mid-1960s during which researched and wrote his bestseller "", a subject covered in the film "Capote" a year earlier.

Truman Capote, known in society for his wit and fashion flair as much as he is recognized in literary circles as the celebrated writer of "Other Voices, Other Rooms" and "Breakfast at Tiffany's", reads a small article about the of a ing family in in the back pages of the "" of November 16, 1959. Curious as to how the residents would react to a brutal massacre in their midst, the author and his friend travel to the small town, obstensibly so Capote can interview people for a magazine article. Once there, he realizes there might be enough material for what he eventually describes as a .

Capote, whose dress and demeanor both amuse and dismay law enforcement officials, allows Lee to act as a buffer between himself and those whose trust he needs to gain in order to obtain as much background information as possible. The 's lead detective on the case, Alvin Dewey, has refused to cooperate with the writer, but when his starstruck wife Marie meets Capote in front of the display at the local grocery store, she invites him and Lee to dinner. He eventually wins over his host with his stories about , , , and the like. As a result, when ex-convicts and Perry Smith are apprehended in Las Vegas and extradited to Holcomb, Capote is permitted to interview them in their cells. The two men are tried and found guilty, and a lengthy period of s begins.

Capote slowly forms an attachment to Smith. He empathizes with his unhappy childhood, and his remorseful manner, genuine sincerity, and obvious intelligence impress him. Eventually the criminal's reciprocal feelings become evident, although he has difficulty dealing with his emotions. Smith learns Truman plans to title his book "In Cold Blood", which suggests the author thinks of him only as a merciless killer. Angered, he violently subdues Capote and nearly rapes him, then embraces him with a passionate kiss.

Perry steadfastly refuses to describe the night of the murders, which greatly angers Truman. He seems to want to hear the details not only as a writer in search of the truth but as someone who finds it difficult to believe a loved one could be guilty of such a crime. Eventually Perry acquiesces and discusses what transpired.

Truman finds himself entangled in a personal and professional dilemma. As much as he wants Perry to be sentenced to life in prison, death by hanging will provide a far more satisfying ending for readers of his book. He begins to waver in his feelings, and provides no legal assistance for the final appeal. Perry and Richard have exhausted all their options; they ask that Truman be present at their April 14, 1965 execution, and he complies with their request. Afterwards he learns Perry bequeathed his meager belongings to him, and among them he finds a charcoal sketch of him the killer had drawn.

The film's original title alternated between "Have You Heard?" and "Every Word Is True".

"Infamous" premiered at the August 2006 . It differs from the earlier "Capote" in that it occasionally breaks away from the Kansas setting to allow Capote's society friends and professional acquaintances to comment on and express opinions about him to an unseen interlocutor during mock interviews. It also is more explicit about the romantic feelings Capote and Perry Smith shared.

The singer portrayed by originally was intended to be [ [http://www.findarticles.com/p/articles/mi_m1285/is_11_34/ai_n8563816 "Interview", December 2004] ] . The situation of an audience being held spellbound by a performer falling silent in the middle of a song was based on a real-life performance by ["Infamous" DVD commentary by Douglas McGrath] .

In his review in the "New York Times", A.O. Scott called the film "well worth your attention. It is quick-witted, stylish and well acted . . . warmer and more tender, if also a bit thinner and showier, than "Capote" . . . it is in the end more touching than troubling." [ [http://movies.nytimes.com/2006/10/13/movies/13infa.html "New York Times" review] ]

of "" opined, "They gave the Oscar to the wrong Truman Capote. I do not begrudge the versatile, popular his Oscar for playing the tiny terror in "Capote", but he was doing an impression. In "Infamous" . . . a diminutive actor with a titanic talent named Toby Jones literally becomes the man himself. This is no lisping impersonation learned from watching old shows: Mr. Jones moves into Truman's skin, heart and brains. "Infamous" shows you the man’s soul. It is a monumental achievement of great artistry and depth. In some ways, the movie is better, too . . . [it] is infinitely fascinating, cinematically breathtaking and largely impeccable. It proves that there's more than one way to tell a story and view a life. It is one hell of a beautiful movie to see and savor." [ [http://www.observer.com/node/39586 "The New York Observer" review] ]

In "Variety", David Rooney felt the film "doesn't measure up to its predecessor and seems unlikely to echo the attention it received . . . In the central role, British thesp Toby Jones is a good physical match for Capote, getting his flamboyant mannerisms and creepy, nasal voice down. But unlike Philip Seymour Hoffman's Oscar-winning turn, there's no texture, no under-the-skin sense of the conflict between Capote's ambition for his book and his compassion for, and attraction to, Perry . . . Sandra Bullock's understated performance as Capote's friend Lee is a high point here - wrapped in a cardigan and puffing on cigarettes, she creates a bracingly sturdy character of this plain-speaking, unfussy woman amid a cardboard gallery of flashy sophisticates." [ [http://www.variety.com/awardcentral_review/VE1117931415.html?nav=reviews07&categoryid=2352&cs=1&p=0 "Variety" review] ]

of the "" observed, "By the standards of most pictures, this is intelligent, thoughtful filmmaking . . . it's only against the exalted benchmark standard set by "Capote" that "Infamous" falls short . . . It's a worthy film in its own right, with its own virtues . . . Either through studying Lee or channeling someone else, Bullock adopts mannerisms and facial expressions that are not her own for this role and then works them into a well-crafted portrait of a highly internal, observant and deep-revolving spirit. It's the performance to take from the movie." [ [http://www.sfgate.com/cgi-bin/article.cgi?f=/c/a/2006/10/13/DDGV9LNJNA1.DTL "San Francisco Chronicle" review] ]

In "", Robert Wilonsky stated the film "never comes close to approaching the quiet, devastating brilliance of "Capote" . . . Which is not to say "Infamous" . . . is a far inferior version . . . it's just a lesser version, light in weight and absent the ache . . . It's good, especially during its first half, just not good enough." [ [http://www.villagevoice.com/film/0641,wilonsky,74695,20.html "The Village Voice" review] ]

Steve Persall of the "" rated the film B and added, "Infamous" might have been viewed as one of this year's better films if "Capote" hadn't told the same story about the same characters a year ago and done it so well . . . "Infamous" is inferior, although not drastically so, in almost every respect . . . The most obvious comparisons are to be made about performances. Jones is a much more accurate physical representation of Capote than Hoffman, his high-pitched voice sounding a little more affected than his Oscar-winning predecessor. However, the relative shallowness of McGrath's screenplay doesn't offer as many emotional land mines for Jones to play. [He] delivers an uncanny impersonation, while Hoffman's portrayal was a studiously researched impression, a likely more challenging task. Call this race nearly a draw, with Hoffman simply crossing the finish line first." [ [http://www.sptimes.com/2006/10/12/Weekend/A_day_late__a_dollar_.shtml "St. Petersburg Times" review] ]

In comparing this film to "Capote", David Thomson of "" asked, "What does it have that's different? . . . [It] has a gallery of Truman Capote's Manhattan friends, people who adored him without ever quite trusting him . . . These cameos give a tone-perfect sense of Capote's life before "In Cold Blood". He is placed as the phenomenon of culture, celebrity and outrage that he was." [ [http://enjoyment.independent.co.uk/film/features/article1096307.ece "The Independent" review] ]

Toby Jones won the London Film Critics Circle Award for British Actor of the Year. Daniel Craig was nominated for the but lost to in "".