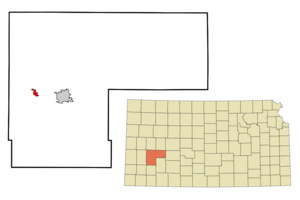 Holcomb is known for the Clutter family murder and subsequent novel "".

There were 592 households out of which 65.0% had children under the age of 18 living with them, 64.9% were married couples living together, 17.2% had a female householder with no husband present, and 13.0% were non-families. 10.1% of all households were made up of individuals and 2.2% had someone living alone who was 65 years of age or older. The average household size was 3.42 and the average family size was 3.62.

The town of Holcomb was thrust into national headlines on , , when four members of the prominent Clutter family -- Herbert, 48; his wife Bonnie, 45; daughter Nancy, 16; and son Kenyon, 15 -- were found bound and shot to death in various rooms of their River Valley Farm house on the outskirts of Holcomb.

Two ex-convicts, Richard ("Dick") Eugene Hickock and Perry Edward Smith, were soon arrested, questioned, confessed, then tried, and convicted of the killings. It started when both Hickock and Smith were released from prison and acting on jailhouse information by a fellow cellmate named Floyd Wells (who had once worked for Mr. Clutter), made plans to rob the Clutter household under the mistaken belief that Mr. Clutter kept thousands of dollars in cash in a safe at the residence. There was no Clutter safe, nor any substantial amount of cash in the home. Upon this discovery, and after killing the captive family to eliminate any witnesses, the pair fled with around $42, a portable radio, and one binocular. They were arrested 6 weeks later in . Following their convictions and after several appeals, both Hickock and Smith were hanged for their crimes on , .

The shocking murders, arrests and convictions of both Hickock and Smith were the basis for author 's acclaimed book, "In Cold Blood", which was serialized in "" magazine in 1965 and first published in book form in 1966. Capote actually began work on the book several days after he read a news article in a New York paper in 1959 about the murders.

The best-selling book, in turn, spawned several filmed versions of the compelling story: director ' theatrical feature film In Cold Blood in 1967 starring Robert Blake, Scott Wilson and , and a two-part made-for-television movie starring , and that aired on network TV in 1996. Portions of the 1967 theatrical film were shot on location in and around Holcomb and nearby Garden City, including the actual Clutter house where the crimes occurred. The 2005 movie "Capote", directed by Bennett Miller, is also about the author Truman Capote, and provides great insight into Mr. Capote, his writing, and the crimes in Holcomb.
received an Oscar for Best Actor in March 2006 for his portrayal of author Truman Capote in the movie. The film Infamous covers much of the same ground.

The city is served by . [http://users.pld.com/holcomb/]

All residents are zoned to Holcomb Middle School and Holcomb High School.