The term describes an aesthetic that can be found in disparate areas in East Asia: a young man whose beauty (and sexual appeal) transcends the boundary of gender or sexual orientation. It has always shown the strongest manifestation in Japanese pop culture, gaining in popularity due to the androgynous glam rock bands of the 1970s,[1] but it has roots in ancient Japanese literature, the homosocial and homoerotic ideals of the medieval Chinese imperial court and intellectuals, and Indian aesthetic concepts carried over from Hinduism, imported with Buddhism to China.[2]

Today, bishōnen are very popular among girls and women in Japan.[2][3] Reasons for this social phenomenon may include the unique male and female social relationships found within the genre. Some have theorized that bishōnen provide a non-traditional outlet for gender relations. Moreover, it breaks down stereotypes surrounding feminine male characters. These are often depicted with very strong martial arts abilities, sports talent, high intelligence, or comedic flair, traits that are usually assigned to the hero/protagonist.[4] 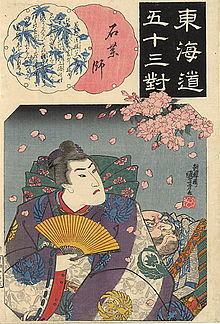 Yoshitsune, a historical bishonen and his retainer Benkei view the falling cherry blossoms.

The prefix bi (美) more often than not refers to feminine beauty, and bijin, literally "beautiful person", is usually, though not always, used to refer to beautiful women.[2] Bichūnen means "beautiful middle-aged man".[5] Biseinen is to be distinguished from bishōnen as seinen is used to describe men who are of age, including those who have entered or completed tertiary education. The term shōnen is used to describe boys of middle and high school age. Last, bishota can be used to refer to a beautiful, pre-pubescent male child or a child-like male.[2] Outside Japan, bishōnen is the most well-known of the three terms, and has become a generic term for all beautiful boys and young men.

The aesthetic of the bishōnen began as an ideal of a young homosexual lover, originally embodied in the wakashū (若衆, literally "young person", although only used for boys), or adolescent boy, and was influenced by the effeminate male actors who played female characters in kabuki theater. The term arose in the Meiji era, in part to replace the by then obsolete erotic meaning of the older term wakashū, whose general meaning of "adolescent boy" had by this point been supplanted by the new term shōnen.[4] The bishōnen was conceived of as "aesthetically different from both women and men [...] both the antithesis and the antecedent of adult masculinity".[6]

The bishōnen is typically slender, with clear skin, stylish hair, and distinctly feminine facial features (such as high cheekbones), but simultaneously retains a male body. This androgynous appearance is akin to the depiction of angels in Western renaissance art, with similar social roots for this aesthetic.[4]

The aesthetic of the bishōnen was recorded in Lady Murasaki Shikibu's Tale of Genji, written in about the year 1000 A.D. Genji concerns the exploits and romances of a young prince, the son of an emperor and beloved concubine, who is not in line to inherit the throne, and follows his intrigues through the court as he comes of age. The novel typifies the Heian age of Japanese history, a period of highly-stylized romance. Prince Genji's beauty is described as transcendental, so much so that "one could have wished him a woman", with a bewitching attraction that is acknowledged by men and women alike.

Minamoto no Yoshitsune and Amakusa Shirō have been identified as historical bishōnen.[7] Ian Buruma notes that Yoshitsune was considered by contemporaries to be not physically prepossessing, but that his legend later grew and due to this, he became depicted with good looks.[8] Abe no Seimei was depicted according to the standards of a Heian-era middle-aged man, but since 1989 he has been depicted as a modern-style bishonen.[9]

Kyokutei Bakin wrote many works with nanshoku undertones featuring bishonen characters,[10] and in 1848 he used the term bishonen in the title of a work about the younger wakashu partner in the nanshoku relationship.[1]

The bishōnen aesthetic is perpetuated today in anime and manga, especially shōjo and BL.

Some non-Japanese, especially American, anime and manga fans use the term to refer to any handsome male character regardless of age, or any homosexual character.[11] In the original Japanese, however, bishōnen applies only to boys under 18. For those older, the word bidanshi, literally "handsome man" is used. In the place of bishōnen, some fans prefer to use the slightly more sexually neutral bishie (also spelled as bishi) or bijin, but these terms remain less common. The term binanshi was popular in the 1980s. Bishōnen is occasionally used to describe some androgynous female characters, such as Takarazuka actors,[12] Lady Oscar in The Rose of Versailles,[1] or any women with traits stereotypical to bishōnen.

Bishōnen is also used to describe an anime or manga character who is drawn as if a female, but has male components.[citation needed] This would make it easier for the artist to create a feminine male, rather than drawing a male character regularly.

Scottish pop singer Momus notably used the term in his song, "Bishonen" from the "Tender Pervert" album (released on Creation Records).[13] Almost 8 minutes long, the song is an epic tale of a young boy raised to die young by an eccentric stepfather.

The enduring preference for bishōnen males can clearly be seen in Japan and throughout parts of East Asia to this day.[4]

In particular, Japan's largest male talent agency, Johnny & Associates Entertainment Company specializes only in producing male Tarento idols.[14] Accepted into Johnny & Associates in their early teens, these boys, collectively known as 'Johnnys', are trained and promoted to become the next leading singing-acting-commercially successful hit sensations. Almost all can be classifed as bishōnen, exhibiting the same physically feminine features combined with a sometimes deliberately ambivalent sexuality or at the very least, a lack of any hint of a relationship in order to maintain their popular availability.

Current bishōnen examples from the same agency include Tomohisa Yamashita of J-pop group NEWS, Jin Akanishi and Kazuya Kamenashi of KAT-TUN, Takuya Kimura of SMAP, and Jun Matsumoto of Arashi, all of whom are phenomenally successful throughout East Asia by appealing to both younger and older women and whose widely praised, gender-incongruous physical beauty is often deliberately manipulated in terms of role-playing and, most commonly, fanservice. 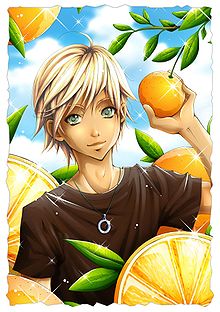 Besides being a character type, bishōnen is also a distinct art style not usually forgotten in books about drawing manga. In art, bishōnen are usually drawn delicately, with long limbs, silky or flowing hair,[15] and slender eyes with long eyelashes that can sometimes extend beyond the face. The character's "sex appeal" is highlighted through introducing the character by using an "eroticized" full page spread.[16] Characters with "bulging muscles" are rarely considered bishonen, as they are too masculine.[5]

Bishōnen characters are fairly common in manga and anime; a heavy number of male characters show subtle signs of the bishōnen style, such as slender eyes or a feminine face.[4]

Some manga are completely drawn in the bishonen style, such as Dragon Knights. Bishōnen manga are generally shōjo manga (girls' comics) or yaoi (girls' comics focused on homosexual relationships between beautiful boys), however shōnen manga (boy's comics) may use casts of bishōnen characters for crossover appeal to female readers.[17]

Bishōjo ("beautiful girl") is often mistakenly considered a parallel of bishōnen, because of the similar construction of the terms. There are major differences between the two aesthetics. The bishōjo aesthetic is aimed at a male audience, and is typically centered around young girls, drawn in a cute, pretty style; bishōnen is centered around teenage boys, drawn elegantly. Another common mistake is assuming that the female characters in bishōnen manga and anime are bishōjo. In truth, female characters in bishōnen manga are very different from those in bishōjo; bishōjo females are usually more petite and drawn in a style that is cute rather than beautiful, whereas bishōnen females exhibit the long limbs and elegance of the bishōnen.[11]

Several cultural anthropologists and authors have raised the multifaceted aspect of what bishonen represents and what it is interpreted as, mostly to fit a particular external viewpoint.[18] Ian Buruma noted that although Western comics for girls also included "impossibly beautiful men" who are clearly masculine and always get the girl in the end, the bishonen are "more ambivalent" and sometimes get each other.[12]

For Sandra Buckley, bishōnen narratives champion “the imagined potentialities of alternative [gender] differentiations"[19] James Welker describes the bishonen as being "queer", as the bishonen is an androgynous aesthete with a feminine soul "who lives and loves outside of the heteropatriarchal world".[20]

Jonathan D. Mackintosh believes that the bishonen is a "traditional representation of youth", being "interstitial" between both childhood and adulthood and between being male and being female,[21] regardless of the sexual issues.

Ishida Hitoshi makes the case that the image of the bishōnen is more about a grounding in sexuality than a transcendence of it, drawing on the idea of the image as being a refuge for alternative methods of looking at sexual natures, and sexual realities, at least since the 60's, rather than the elegiac aesthetics of usages in an earlier era.[22]

Representations of men in manga by and for men show "an idealized man being ultramasculine and phallic", bishonen are conversely drawn to "emphasize their beauty and sensuality", and female artists have been said to react against the ultramasculine representation by showing androgynous and "aesthetically beautiful" men.[16]

Ian Buruma, writing in 1984 considered the "bishonen in distress" to be a recurring motif in popular manga. The bishonen in distress is always rescued by an older, protective, mentor. This scenario has an "unmistakably homoerotic" atmosphere.[12] He also notes that bishonen must either grow up, or die beautifully. He considers the "worship" of the bishonen to be the same as that of the sakura, and notes that "death is the only pure and thus fitting end to the perfection of youth."[23]

A similar, South Korean aesthetic has been noted in the kkot-mi-nam ('flowery pretty boy').[24]