American Pie is a 1999 teen comedy film written by Adam Herz. American Pie was the directorial film debut of brothers Paul and Chris Weitz, and the first film in the American Pie film series. The film was a box-office hit and spawned two direct sequels: American Pie 2 (2001) and American Wedding (2003).

Since the conclusion of the American Pie trilogy, featuring the courtship and marriage of the characters Jim Levenstein and Michelle Flaherty, the American Pie name has gone on to be used as an entity similar to the National Lampoon film series. American Pie has spawned four direct-to-DVD spin-off films bearing the title American Pie Presents: Band Camp (2005), The Naked Mile (2006), Beta House (2007) and The Book of Love (December 2009).

Another theatrical release, the fourth in the series and tentatively entitled American Reunion, was recently announced as being in pre-production for a 2012 release.[2]

Vicky later accuses Kevin of being with her only for sex, and he must try and repair his relationship with her before the upcoming prom night, when the four plan to lose their virginity. He eventually succeeds. Oz, meanwhile, joins the jazz choir in an effort to lose his reputation as an insensitive jock and find a girlfriend there. He soon wins the attention of Heather (Mena Suvari), a girl in the choir. However, he runs into problems when Heather comes to learn about Oz's reputation and subsequently breaks up with him, although he later manages to regain some of her trust, and later most of it when he leaves the lacrosse championship to perform a duet with her in a choir competition. Jim, meanwhile, attempts to pursue Nadia (Shannon Elizabeth), an exchange student from Czechoslovakia. Stifler persuades him to set up a webcam in his room so that they can all watch it together. The plan suffers a hiccup, though, when Nadia discovers Jim's pornography collection and sits half-naked on his bed to read it. Jim is persuaded to return to his room, where he joins Nadia, unaware that he accidentally sent the weblink to the entire school directory. As Nadia is preparing to have sex with him, he prematurely ejaculates twice, humiliating himself live in front of the entire school. Shortly afterwards Nadia leaves school and goes back home now leaving Jim completely dateless for prom and his likeliness of losing his virginity before high school is over. In his desperation, Jim asks band geek Michelle Flanerty (Alyson Hannigan) to the senior prom as she is apparently the only girl at his school who did not see what happened. Finch, meanwhile, pays Vicky's friend, Jessica (Natasha Lyonne), $200 to spread rumors around the school of his sexual prowess, hoping that it will increase his chances of success. Unfortunately, he runs into trouble when Stifler, angry that a girl turned him down for the prom because she was waiting for Finch to ask her, puts a laxative into Finch's cappuccino. Finch, being paranoid about the lack of cleanliness in the school restrooms, and unable to go home to use the toilet as he usually does, is tricked by Stifler into using the girls' restroom. Afterward, he emerges before many other fellow students, humiliated and is left dateless.

At the prom, everything seems hopeless for the four boys until Vicky asks the girl that Chuck Sherman claimed to have bedded about her "first time." She proclaims to everyone at the prom that she and Sherman did not have sex at Stifler's party, leaving Sherman embarrassed and making him wet himself. The revelation takes the pressure off of Jim, Kevin, Oz and Finch, and they head to the post-prom party with new hope. At the after-party at Stifler's house, all four boys fulfill their pledge. Kevin and Vicky have sex in an upstairs bedroom. Vicky breaks up with Kevin afterwards on the grounds that they will drift apart when they go to college, with him attending the University of Michigan and her at Cornell University; he tries to persuade her otherwise but quickly realizes that the distance between the two schools will be too much of a burden. Oz confesses the pact to Heather, and renounces it, saying that just by them being together makes him a winner. They reconcile and wind up making love together on the dock. Oz, honoring his newfound sensitivity, never confesses to what they did. Jim and Michelle have sex after he finds out that she is actually not as much of a band geek as she let on and she saw the "Nadia Incident" after all. She accepted his offer to be his date because of it, knowing he was a "sure thing," but she makes him wear two condoms to combat his earlier "problem" with Nadia. Jim is surprised to discover that Michelle behaves unexpectedly aggressively in bed. In the morning he wakes up to find her gone and realizes that she had used him for a one-night stand, which Jim thinks is "cool." Dateless, Finch strays downstairs to the basement recreation room where he meets Stifler's mother, Jeanine (Jennifer Coolidge). She is aroused by his precociousness, and they have sex on the pool table. In the morning, Stifler enters the room, realizes that his mom has had sex with Finch and faints, unable to believe that his mom and "Shit Break" are together. The morning after the prom Jim, Kevin, Oz, and Finch eat breakfast at their favorite restaurant - with the fitting nostalgic name, "Dog Years" - where they toast to "the next step." The film ends with Nadia watching Jim stripping on his webcam. His dad walks in but walks out and starts dancing like Jim. 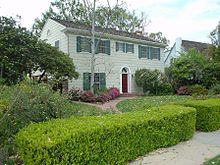 In the film, the town is called "East Great Falls", and the high school sports the same school colors — blue and yellow — along with a similar mascot — the Trailblazers instead of the Pioneers. The restaurant hangout, "Dog Years", is based on Yesterdog, a popular hot dog restaurant in the nearby Eastown neighborhood of Grand Rapids.[5] The "Central Chicks" and "Central" Lacrosse team that East Great Falls plays against is an amalgam of nearby Forest Hills Central High School and Grand Rapids Central High School.[6]

The following songs were included in the film but were not featured on the soundtrack:

The film received mixed reviews from critics. Stephen Holden of The New York Times felt American Pie was "one of the shallowest and the most prurient teen films."[12] Robert Horton of Film.com wrote that American Pie "had a few amusing bits, however the audience should strongly note that the movie is really awful, and that it was not worthy of guilty pleasure status."[13] Jim Sullivan of The Boston Globe wrote that American Pie is a "gross and tasteless high school romp with sentimental mush."[13] However, Roger Ebert was more supportive, awarding it three out of four stars. He noted that "[i]t is not inspired, but it's cheerful and hard-working and sometimes funny, and--here's the important thing--it's not mean. Its characters are sort of sweet and lovable."[14] American Pie holds a 59% "Rotten" rating on Rotten Tomatoes[15] and a score of 58/100 ("mixed or average reviews") from Metacritic.[13]