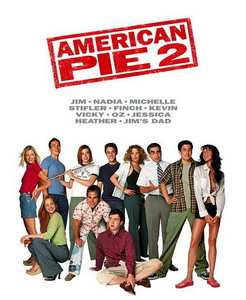 "American Pie 2" is the 2001 to the "American Pie", making it the second in the American Pie franchise. It was written by (characters, story, screenplay) and (story), and directed by . The film picks up the story of the four friends from the first film as they reunite during the summer after their first year of . It was released in the on , , and grossed over $145 million in the USA and $142 million overseas on a budget of $30 million. Its sequel is "" ().

The story is about the four friends, and their attempts to have the greatest summer party ever at a summer beach house first used by Kevin's older brother four years ago. Kevin is lost without Vicky, and often accidentally makes advances on her even though they are no longer dating. Nadia is coming for the party, and Jim is desperate so he asks Michelle for help with his sexual problems. Stifler invites his younger brother to party, and Finch has yet another meeting with Stifler's mom. Oz is going steady, and has a long distance relationship while his girlfriend who is in , but once again Stifler interrupts the . The film keeps the same as the first, and also holds true to the idea of piling on risqué scenes one after another. The movie also focuses more on Jim and Michelle, who, when Nadia arrives early, pretend to be in a relationship so she will not expect Jim to have sex (After the incident with "Pussy Palace"). They break the fake relationship off once Jim is ready to sleep with Nadia but Jim, having fallen in love with Michelle, proceeds to turn down Nadia and enter into a relationship with Michelle instead.

The end of the movie shows many of the friends sleeping with familiar (and some not-so familiar) people. Jim is with Michelle and Oz is with Heather, like in the first movie. Sherman gives up on getting anyone, but the rejected Nadia, who wanted Jim because he was a geek, is turned on by his "Sherminator" gimmick, and has sex with him. Stifler ends up with two women he at first thought were . Kevin doesn't end up with anyone, but he does seem to succeed in getting over Vicky. As for Finch, he spends the night talking with a few girls, but he doesn't sleep with any of them. Soon after, Stifler's mother arrives, and the end of the movie shows her car on the side of the road, with Finch having sex with her.

The following songs were included in the movie but were not featured on the soundtrack: