Ghostface Killah
This article is about the rapper. For the Scream killer, see Ghostface (Scream).

Dennis Coles (born May 9, 1970),[1] better known by his stage name Ghostface Killah, is an American rapper and prominent member of the Wu-Tang Clan.[2] After the group achieved breakthrough success in the aftermath of Enter the Wu-Tang (36 Chambers), the members went on to pursue solo careers to varying levels of success. Ghostface Killah debuted his solo-career with Ironman in 1996, which was well received by music critics. He has continued his success over the following years with critically acclaimed albums such as Supreme Clientele (2000) and Fishscale (2006). His stage name was taken from one of the characters in the 1979 kung fu film Mystery of Chessboxing.[3]

Ghostface Killah is critically acclaimed[4][5] for his loud, fast-paced flow,[3] and his emotional stream-of-consciousness narratives containing cryptic slang and non-sequiturs.[3][6] In 2006, MTV included him on their honorable mention list of The Greatest MCs of All Time,[7] while the editors of About.com placed him on their list of the Top 50 MCs of Our Time (1987–2007), praising him as "one of the most imaginative storytellers of our time."[8] Ghostface's storytelling abilities have widely been praised, with Q magazine calling him "rap's finest storyteller."[9]

A roommate of Wu-Tang founder The RZA, Ghostface helped bring together the other seven members, and would function as executive producer on all the Wu-Tang Clan releases.

In 1995, Ghostface guest-starred extensively on fellow Clan member Raekwon's debut album, Only Built 4 Cuban Linx..., appearing on almost every song. He also contributed songs to the Sunset Park and Don't Be A Menace To South Central While Drinking Your Juice In The Hood soundtracks, which would be included on his first solo LP, Ironman, in 1996. The album, which debuted at #2 on the Billboard 200, had a more pronounced soul influence (particularly 1970s soul) than previous Wu-Tang releases, and Ghostface's future albums would continue to feature this stylistic trait.

Ghostface became well-known for both his up-tempo, stream-of-consciousness rap and, later in his career, for his emotionally charged raps and smooth constant flow. In 1996, he discovered that he was diabetic, a condition that would weaken his health. According to "Trials of Life", a 2007 song with fellow New York rapper Prodigy (himself a sickle-cell anaemic), Ghostface assumed he had been stricken by a sexually transmitted disease until he received the diabetes diagnosis.

Ghostface was incarcerated for attempted robbery in 1999, a situation that was never publicly commented on by the Wu-Tang Clan or Ghostface (the charge dated from 1995). It would lead to a delay in his next album in 2000 with his follow-up to Ironman, Supreme Clientele. The album was well-received by critics and was placed #2 on Hip Hop Connection's list of "The 100 Greatest Rap Albums 1995-2005". It included "Apollo Kids", a popular single which featured Raekwon and had a sample of "Cool Breeze" by Solomon Burke. "Cherchez LaGhost", another single off the album, became a minor club hit. The album also notably included the sentimental "Child's Play" which brought numerous comparisons to Slick Rick. Supreme Clientele would be a turning point in RZA's influence on his sound, as only six songs are produced by the RZA, compared to Iron Man, its predecessor where every song but one is produced by him. Though he contributed fewer beats to the project, RZA personally oversaw the mixing and production of the album as a whole, contributing to Supreme Clientele's unified sound

Ghostface wasted little time in recording his next album, the heavily R&B-influenced Bulletproof Wallets, released a year after Supreme Clientele. Its feature single, Never Be the Same Again, featured Carl Thomas and Raekwon. He had another minor club hit with Flowers, which featured guest vocals from fellow Wu-Tang members Method Man and Raekwon, and a popular single Ghost Showers which featured Madame Majestic, who also sung on the popular Wu-Tang track Gravel Pit. It was well received, but never really matched its predecessor in popularity or renown.

In 2003, Ghostface signed with Def Jam Records. After temporarily dropping "Killah" from his stage name, Ghostface released The Pretty Toney Album in April 2004. The album, while containing two RZA productions, featured none of the Clan; instead, it featured collaborations with Missy Elliott, D-Block and Jacki-O. The singles "Tush" and "Run", the collaborations with Missy and Jadakiss respectively, achieved moderate success in the clubs and charts, and the album was featured on numerous "best of the year" lists, including number nine on Pitchfork Media's.[10] Ghostface also appeared on the track "On My Knees" by UK R&B group The 411, which became a hit in the UK and Australia, and released an album titled 718 (after the Staten Island area code) with a group of his protégés, the Theodore Unit. Ghostface also appeared on "He Comes" by De La Soul, on The Grind Date. In November 2005, Ghostface and Theodore Unit's breakout star Trife Da God released a joint project, Put It On The Line. 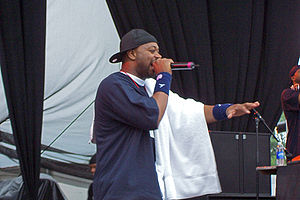 Ghost at the Virgin Festival in 2007.

In 2006, Ghostface teamed up with underground artist MF Doom for a still unreleased album entitled Swift & Changeable. MF Doom also produced several songs for Ghostface's 2006 album Fishscale, which was once again attributed to "Ghostface Killah". The album debuted strongly, in the #4 position on the U.S. Billboard 200 and at #2 on the R&B charts,[11] the rapper's most auspicious chart showing since the heyday of the Wu-Tang Clan and the release of his solo debut. The album also nearly unanimously received positive reviews. Ghostface embarked on a limited-date tour of US venues in support of the album, performing several of his concerts together with most members of the Wu-Tang Clan.

He has worked with 4Cast to produce his own action figure.[12] In December 2007 Ghostface appeared on Spinner.com's comedy show The DL[13] to do a holiday commercial for his action figure.[14]

In a May 2008 interview, Ghostface Killah stated that he would make an R&B-inspired album in the vein of tracks he had done before with artists such as Ne-Yo and Jodeci.[15][16] That album would become his eighth studio album Ghostdini: Wizard of Poetry in Emerald City to good reviews. It featured singles such as "Baby" and "Do Over". In March 2009, Ghostface also recorded a song called "Message from Ghostface" dedicated to women who were abused in relationships after the Rihanna/ Chris Brown controversy.

Raekwon, in a May 2009 interview with Rolling Stone indicated that Ghostface Killah is preparing to release a new album. In response to a question asking if the Wu-Tang Clan are going to release a follow up to 8 Diagrams, Raekwon stated "Everybody's doing different things right now — you got Meth [Method Man] coming out with an album, you got Ghostface coming out with an album, some guys working on their projects, some guys getting into the film world, everybody is multi-tasking right now."[17] Ghostface appeared on a total of 8 songs on Raekwon's highly anticipated release of Only Built 4 Cuban Linx... Pt. II.

Shortly after the release of Only Built 4 Cuban Linx... Pt. II, Def Jam contracted Raekwon to work with their label artists Method Man and Ghostface Killah on an album later titled Wu-Massacre. Production began in November 2009. Wu-Massacre was released March 30, 2010 to generally positive reviews from most music critics with some mixed criticism due to the album's rushed feel clocking in at a mere 30 minutes of music. With heavy promotion, it sold 37,900 units in its first week. It has sold 64,000 units as of May 12, 2010. It features production from Scram Jones, Mathematics, and the RZA who produced the album's lead single, "Our Dreams". Recently he confirmed that he will be releasing 3 studio albums with the first one out near December called Apollo Kids, the second called Blue & Cream and finally he will be releasing a sequel to his 2000 album Supreme Clientele.[18] He recently confirmed a collabo album with D-Block member Sheek Louch as well called Wu-Block.[19]

In July of 2011, Coles was sued by Jack Urbont for copyright violation, stemming from the improper use of Urbont's 1960's Iron Man theme song. Urbont has also notably taken issue with Coles appropriation of the Iron Man brand name.[20]

In August of 2011, Coles filed a lawsuit against Universal Music for unpaid royalties.[21]

Ghostface Killah, like most members of the Wu-Tang clan, rapped under several personae, each with their own name, mythology and influences. Some recurring aliases:

His shortened stage name during The Pretty Toney Album era.[22][23]

Ghostface has frequently assumed the persona of both Ironman and Tony Starks, a reference to the Marvel Comics character Iron Man and his true identity, billionaire industrialist Tony Stark (note the variant spellings). He released a 1996 album titled Ironman and has drawn deeply on the Iron Man mythology. His song, "Slept On Tony With Dirt," appears in the 2008 film, and he even appears in a deleted scene on the DVD.[25]