A snipe hunt, a form of wild-goose chase that is also known as a fool's errand, is a type of practical joke that involves experienced people making fun of credulous newcomers by giving them an impossible or imaginary task. The origin of the term is a practical joke where inexperienced campers are told about a bird or animal called the snipe as well as a usually preposterous method of catching it, such as running around the woods carrying a bag or making strange noises such as banging rocks together. Incidentally, the snipe (a family of shorebirds) is difficult to catch for experienced hunters, so much so that the word "sniper" is derived from it to refer to anyone skilled enough to shoot one.[1]

A fool's errand is a task that cannot be accomplished because of fate or because it is a joke. It comes mainly in two varieties: trying to find something that does not exist, or trying to accomplish an impossible task. Others who are aware of the prank will often redirect the victim to several different places.

The prank often involves the use of jargon, where the immediate meaning is not obvious. It can also depend on a new recruit's unfamiliarity with the business, such as being sent on a search for an ID10T form (pronounced I.D. Ten Tee).

In carny, a type of fool's errand is known as the key to the midway. 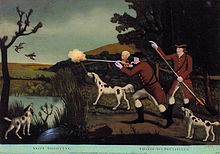 Particularly skeptical novices can be caught out by a request for a large- or medium-sized small tool. Although sounding ridiculous, these do in fact exist: the small tool is a small trowel-like implement used in building and brick-laying, and comes in several sizes.

Many regions have an imaginary being used as a snipe hunt. In Bavaria, tourists were taken on extended expeditions to search for chamois eggs, or on all-night Wolpertinger stakeouts. In Scotland, tourists are told about the Wild Haggis hunts, while in the Western United States, they may be warned about the savage jackalope. In Australia, foreigners may be warned to remain alert for drop bears, bunyips or hoop snakes, mythical creatures that are a popular joke amongst the locals. In Wyoming, natives warn tourists to watch out for rattlesnake eggs. (Rattlesnakes don't lay eggs; they give birth to live offspring.)

In France, Switzerland and the north of Italy, particularly in mountains like the Alps or the Jura Mountains, tourists are sent to hunt the dahu, an imaginary mammal whose left legs are shorter than its right legs, so that it can walk easily along a mountain slope. A practical way to hunt the beast is to call him from the back: it turns around and falls, because of its long legs on the top and his short legs on the bottom. In Spain and Portugal, new people at a campsite are sent at night to hunt gamusino, an imaginary small animal which is usually said to only appear at night.

In the Philippines, a mythical mammal called a Sigbin or Amamayong has been used in a more criminal manner. The descriptions of the creatures vary, but generally, they are said to have the curious habit of walking backwards with its head twisted between its hindlegs to see and having the ability to turn invisible at will. They are considered members of the fairy/underworld folk, who are usually portrayed as malevolent. The popular notion that a sigbin would bring wealth and good luck to anyone who manages to catch one was used successfully by con men in extorting large amounts of money from gullible families. These self-styled 'sigbin hunters' often using pictures of albino rabbits or kangaroos to the uneducated as 'proof' of actually having seen one. Sigbins were also said to have blood which can cure any kind of ailment (a popular con man catchphrase being Even AIDS!) which also made families of people with a mysterious incurable ailment with no access to doctors more vulnerable to such attempts at fraud. Similar confidence tricks also involve other popular legends like Yamashita's gold.

In Mexico, a common trick is to send people to find tenmeacá (tenme acá, which means "keep me here"). This can be said to be a spice, a medicinal herb or a decorative flower, depending on the situation. Similarly, in the Dominican Republic, a person is told to ask for a "tenteallá" (tente allá, translated to "keep you there"). The meaning of this word is also variable to fit the situation (an office supply, a beauty product, etc.).