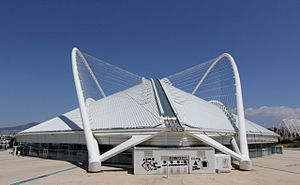 The Olympic Velodrome is a stadium at the Athens Olympic Sports Complex, built in 1991 for the Mediterranean Games. It was extensively refurbished in order to host the track cycling events at the 2004 Summer Olympics in Athens, Greece. The stadium, which seats 5,250 - though only 3,300 seats were made publicly available for the games - has distinctive twin roofs covering the stands on each side, designed by Santiago Calatrava. The track, made of Afzelia wood, is 250 m. long and 7.5 m. wide. Construction of the stadium was completed on May 30, 2004, and it was officially opened on July 30, 2004.