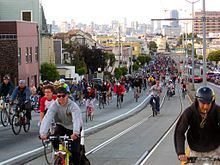 Critical Mass is a cycling event typically held on the last Friday of every month in over 300 cities around the world.[1] The ride was originally founded in 1992 in San Francisco.[2] The purpose of Critical Mass is not usually formalized beyond the direct action of meeting at a set location and time and traveling as a group through city or town streets on bikes. Some bigger scale events as in Budapest, Hungary, have an activist group formed around it, organizing the rides and communicating the desires and problems of the cyclists to the city council.

Critical Mass rides have been perceived as protest and intimidation activities. A 2006 New Yorker magazine article described Critical Mass' activity in New York City as "monthly political-protest rides", and characterized Critical Mass as a part of a social movement;[3] and the UK e-zine Urban75, which advertises as well as publishes photographs of the Critical Mass event in London, describes this as "the monthly protest by cyclists reclaiming the streets of London."[4] Critical Mass participants have insisted that these events should be viewed as "celebrations" and spontaneous gatherings, and not as protests or organized demonstrations.[5][6] This stance allows Critical Mass to argue a legal position that its events can occur without advance notification of local police.[7][8]

Critical Mass-like bike tours with hundreds of participants took place in Stockholm, Sweden in the early 1970s.[9] But the first ride within the present wave took place on Friday, September 25, 1992 at 6 pm in San Francisco. At that time, the event was known as Commute Clot and was composed of a couple of dozen cyclists who had received flyers on Market Street.[2]

Shortly after this, some participants in that ride went to a local bicycle shop for a screening of Ted White's documentary Return of the Scorcher, about bike culture overseas. In that film, American human powered vehicle and pedicabs designer George Bliss noted that, in China, both motorists and bicyclists had an understood method of negotiating intersections without signals. Traffic would "bunch up" at these intersections until the backlog reached a "critical mass", at which point that mass would move through the intersection. That term from the movie was applied to the ride,[10] and the name caught on, replacing "Commute Clot" by the time of the second event.[2]

By the time of the fourth ride, the number of cyclists had increased to around 100 and participation continued to grow dramatically, reaching about 1,000 riders, on average.[2]

The name was soon adopted as a generic label by participants in similar but independent mass rides that were either initiated in various locations around the world at around the same time, or had already existed before 1992 under other names. It is estimated that there are Critical Mass-type rides in more than 325 cities to date. The term "masser" is sometimes applied to a frequent participant.[11]

Critical Mass has a decentralized (rather than hierarchical) structure. Critical Mass is sometimes called an "organized coincidence", with no leadership or membership. The routes of some rides are decided spontaneously by whoever is currently at the front of the ride, while others are decided prior to the ride by a popular vote of suggested routes often drawn up on photocopied fliers. The term xerocracy was coined to describe a process by which the route for a Critical Mass can be decided: anyone who has an opinion makes their own map and distributes it to the cyclists participating in the Mass. Still other rides decide the route by consensus. The disorganized nature of the event allows it to largely escape clampdown by authorities who may view the rides as forms of parades or organized protest. Additionally, the movement is free from the structural costs associated with a centralized, hierarchical organization. In order for the event to function, the only requirement is a sufficient turn-out to create a "critical mass" of riders dense enough to occupy a piece of road to the exclusion of drivers of motorized vehicles. Authorities in New York, California and Oregon have expressed concern with the difficulty of coordinating with the riders, due to the lack of leadership.[12][13][14]

Critical Mass rides vary greatly in many respects, including frequency and number of participants. For example, many small cities have monthly Critical Mass rides with fewer than twenty riders which offer safety in numbers[15] to cyclists in those locales, while on the opposite extreme, in what have been the largest events using the name Critical Mass, cyclists in Budapest, Hungary hold only two rides each year on April 22 (Earth Day) and September 22 (International Car Free Day). The "Budapest style" attracts tens of thousands of riders.[16] The April 20, 2008 Budapest ride participation was estimated at 80,000 riders.[17][18]

Detail from the November 20, 1992 flyer by Joel Pomerantz which introduced the concept of corking

Because Critical Mass takes place without an official route or sanction, participants in some cities have sometimes practiced a tactic known as "corking" in order to maintain the cohesion of the group. This tactic consists of a few riders blocking traffic from side roads so that the mass can freely proceed through red lights without interruption. Corking allows the mass to engage in a variety of activities, such as forming a cyclone, lifting their bikes in a tradition known as a "Bike Lift" (in Chicago this is referred to as a Chicago hold-up), or to perform a "die-in" where riders lie on the ground with their bikes to symbolise cyclist deaths and injuries caused by automobiles, very popular in Montreal. The "Corks" sometimes take advantage of their time corking to distribute fliers.

The practice of corking roads in order to pass through red lights as a group is in contravention of traffic laws that govern cyclist traffic and is contrary to Critical Mass' claim that "we are traffic", since ordinary traffic (including bicycle traffic) does not have the right to go through intersections once the traffic signal has changed to red[19]. Corking has sometimes led to hostility between motorists and riders, even erupting into violence and arrests of motorists and cyclists alike during Critical Mass rides.[20]

The Critical Mass rides have inspired a number of other bicycle movements, that range from political movements to the "Critical Tits" ride during the yearly Burning Man festival.[21] In Chicago, a movement has grown out of the Critical Mass community to promote winter cycling via the bikewinter campaign.[22] The extensive news coverage of San Francisco's July 1997 ride spawned an international celebration of bicycling, called Bike Summer.[23] Kidical Mass originated in Oregon, and encourages bicycle riding for children and families.[24] Critical Sass is an all female version of the ride in Baton Rouge, Louisiana, that takes place the second Friday of every month. Tweed run is a well dressed mass which takes place annually in a number of cities across the world. Examples of Critical Mass rides for political movements includes the Free Tibet Rides (May 2008): Free Tibet Critical Mass in Columbia, Missouri, "Tibetan Freedom Bike Rally" in San Francisco (Aug 2008), and in "Bike Ride for Tibet" in London (Aug 2008).[25]

San Jose is the home to the San Jose Bike Party. Bike Party rides on the third Friday of the month with a different starting point and route each time. Rides are typically 20 – 25 miles in length and usually have 2,500 - 3,500 riders, with a peak of 4,300 in October 2009. The ride aims to build a community of cyclists and prove that bikes can co-exist with cars. It is different than Critical Mass in that it rides after rush hour and obeys all traffic laws and has a pre-determined route.[26] 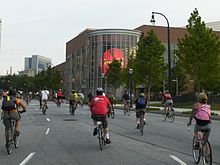 Critical Mass riders pass the World of Coke in Atlanta

In San Francisco, an event known as "Critical Manners" was created as a response to Critical Mass. Critical Manners rides through the city on the second Friday of the month, with riders encouraged to obey all traffic laws such as stopping at red lights and signaling.[27][28] Tucson, Arizona holds the Tuesday Night Community Bike Ride as their alternative to Critical Mass. The weekly ride encourages bicycle commuting and motor vehicle awareness in a peaceful and friendly way.[29]

In 2007 there were conversations about starting Critical Manners in Portland, Oregon.[30] According to the Critical Mass book, a similar project known as Courteous Mass is described as "an alternative to Critical Mass."

An alternative ride named RideCivil formed in Seattle in late 2007.[31] Rides are on the second Friday of every month, and focus on encouraging civility between motorists, pedestrians and cyclists.[32]

On August 14, 2009 there was a Critical Manners ride in Vancouver, British Columbia.[35] The ride consisted of between 70-100 cyclists riding through the downtown core, making all attempts to follow the rules of the road (stopping at red lights / stop signs, using hand signals to turn, using the right-most lane or bike lane when applicable). The event generated some coverage in the local media[36] and was generally deemed a success by the participants, although there were some criticisms.[37] The ride only survived one outing.[38]

Critical Mass rides have generated controversy and public opposition.[39] Some critics claim that Critical Mass is a deliberate attempt to obstruct traffic and disrupt normal city functions, asserting that individuals taking part refuse to obey traffic laws.[40] Altercations with police and motorists have occurred. Although uncommon, protesters are sometimes present at Critical Mass events to oppose the group's methods.

Some bicycling advocacy groups have expressed concern that the "subversive" nature of Critical Mass and altercations with motorists could weaken public support for bicyclists.[13] Though it does not condone incidents of violence and rudeness, the San Francisco Bicycle Coalition credits Critical Mass with spotlighting bicycle issues and aiding their efforts in advocating for cyclists.[2]