Specimen of a German identity card issued since 01 November 2010 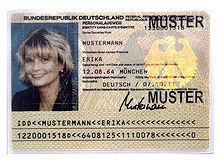 The German Identity Card (German: Personalausweis) is issued to German citizens by the local registration offices (although today they are produced centrally at the Bundesdruckerei in Berlin).

It is compulsory for all German citizens age 16 or older to possess either an identity card or a passport but not to carry one. While police officers and some other officials have a right to demand to see one of those documents, the law does not state that one is obliged to submit the document at that very moment.

As everyone in Germany must possess an ID card or a passport, acceptance of other official documents (like driving licences) as proof of identity is not guaranteed.

Germans travelling inside the European Union or the Schengen Area can use their ID card, which is a machine-readable travel document, instead of a passport.[1]

Just like German passports, German identity cards are valid for ten years (six years if the holder is under 24 at the day of issue).

In 1951 both the West German and the East German authorities began issuing booklet identity cards in the ID-2 format.

In West Germany an improved identity card was developed in the 1980s and issued from April 1987 on: It consisted of a single laminated sheet of paper with a machine-readable zone. To prevent counterfeiting, it contained watermarks, guillochés, microprinting, fluorescent dyes and multi-colour fluorescent fibres. In addition, the holder's name was laser engraved into the plastic film and the holder's picture was printed on the document, so it could not be removed and replaced by a different one (unlike the older ID cards, were the picture was just glued to the document).

The current ID-1 type has been issued since November 2010. It contains an RFID chip similar to that in biometric passports: The chip stores the information given on the ID card (like name or date of birth), the holder's picture (which, unlike the picture on older ID cards, has to be a biometric one) and, if the holder wishes so, also his/her fingerprints. In addition, the new ID card can be used for online authentification (e.g. for age verification or for e-government applications). An electronic signature, provided by a private company, can also be stored on the chip.

Front and back side of the current ID card (specimen). The red strip reads TEST TEST TEST in microprinting.

The current ID card is an ID-1 (credit card size) plastic card with an embedded RFID chip. It is covered with multi-colour guillochés and appears green-brown from the distance. All the information on it is given in German, English and French.

The front side shows the German Eagle and the words "BUNDESREPUBLIK DEUTSCHLAND / FEDERAL REPUBLIC OF GERMANY / REPUBLIQUE FEDERALE D'ALLEMAGNE" and "PERSONALAUSWEIS / IDENTITY CARD / CARTE D'IDENTITE". It contains the following information:

The back side shows the Brandenburg Gate. It contains the following information:

The three-line machine-readable zone on the back side contains the following information:

Empty spaces are represented by "<".

The ID card contains a RFID chip. The chip stores the information given on the ID card (like name or date of birth), the holder's picture and, if the holder wishes so, also his/her fingerprints. In addition, the new ID card can be used for online authentification (e.g. for age verification or for e-government applications). An electronic signature, provided by a private company, can also be stored on the chip.

The document number, the photo and the fingerprints can be read only by law enforcement agencies and some other authorities.[2]

To use the online authentification function, the holder needs a six-digit decimal PIN. If the holder types in the wrong PIN, he has to type in the six-digit decimal access code given on the ID card to prove he/she really possesses the ID card. If the wrong PIN is used three times, a PUK must be used to unlock the chip. The data on the chip are protected by Basic Access Control and Extended Access Control.