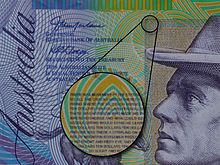 Microprinting on an Australian $10 note. Each letter is approximately 0.2 millimetres (0.0079 in) wide.

Microprinting is one of many anti-counterfeiting techniques used most often on currency[1] and bank checks, as well as various other items of value. Microprinting involves printing very small text, usually too small to read with the naked eye, onto the note or item. Microprint is frequently hidden in an inconspicuous, unnoticeable area on the note or item. For example, on the series 2004 United States $20 bill, microprint is hidden within the border in the lower left corner of the obverse (front) side as well as the Twenty USA background.[1] However, microprint is sometimes placed in a prominent location on the item, and may even be labeled with an MP symbol as a warning that the note or item contains microprinting. On most bank checks in the United States, the line on which the account holder signs his or her name is microprint text, and the microprint line usually includes the MP symbol next to it. An additional safety feature often used is an easily overlooked spelling error inserted somewhere in the microprinted text. For instance in old Finnish passports, there was a microprinted repeated text "Suomi Finland" which in one and only one instance was misspelled as "Soumi Finland".

Example of security microprinting used on a bank check