Moon is a 2009 British science fiction drama film about a man who experiences a personal crisis as he nears the end of a three-year solitary stint mining helium-3 on the far side of the Earth's moon.[2] It is the feature debut of director Duncan Jones.[3] Sam Rockwell stars as the employee Sam Bell, and Kevin Spacey voices his robot companion, GERTY. Moon premiered at the 2009 Sundance Film Festival and was released in selected theatres in New York and Los Angeles on 12 June 2009. The release was expanded to additional theatres in the United States and Toronto on both 3 and 10 July[4] and was released in the United Kingdom on 17 July.[5]

The film was also nominated for two BAFTAs at the 2010 awards. It won the award for "Outstanding Debut by a British writer, director or producer".

Lunar Industries employee Sam Bell (Sam Rockwell) is contracted to work for three years at the largely automated "Sarang" lunar base ("sarang" means "love" in Korean[7] and is written in hangeul on the walls of the base), with only an artificial intelligence assistant named GERTY (voiced by Kevin Spacey) for company. His job is to oversee the automated harvesters which extract helium-3 from the lunar regolith. He periodically sends full canisters to Earth, where the helium-3 is used to generate much-needed clean fusion energy. Chronic communications satellite problems limit him to occasional recorded messages to and from his wife Tess (Dominique McElligott), who was pregnant with their daughter Eve when he left.

Two weeks before he is to return to Earth, Sam begins to hallucinate, briefly seeing a teenage girl on the station. During a routine rover excursion to retrieve a full canister from one of the harvesting machines, he sees a figure standing on the lunar surface. Distracted, he crashes his rover into the harvester and starts losing air. Sam hurriedly puts on his helmet before losing consciousness.

Sam awakens in the base infirmary, with GERTY asking if he remembers the accident which put him there. Sam does not, but GERTY assures him that this is not uncommon. Sam's suspicions are aroused when he eavesdrops on a live communication between GERTY and Lunar Industries executives and learns that GERTY has been instructed not to allow him outside the base. A message informs him that rescue team "Eliza" is on the way to repair the damaged harvester.

Sam sabotages a gas pipe in the base to convince GERTY to allow him outside to check for "micro-meteoroid damage". He heads for the damaged harvester and finds someone barely alive in the crashed rover: himself. Sam brings the person back to the base, where GERTY identifies both him and the injured person as Sam Bell.

The two Sams struggle to come to grips with each other's existence, each believing the other to be a clone. Eventually they are forced to realize they are both clones after GERTY confirms as much, and that the real Sam is back on Earth, after finishing his mission 12 years earlier, not realizing that clones of him are being put to work so as not to have to continually send up new workers. GERTY also revealing that the "accident" the second Sam recovered from is simply part of the standard clone awakening process, and that their memories of Tess and Eve are implants taken from the real Sam Bell.

Exploring outside, the Sams find a series of antennas jamming communication with Earth. The injured Sam becomes progressively weaker, forcing him to return to base after he vomits blood and, later, loses a tooth. With GERTY's assistance he discovers video logs of previous clones working and becoming increasingly ill, with symptoms including hair loss and spontaneous bleeding. Ultimately the clones are shown getting into what they are told is a "hibernation" pod for the journey home, which instead incinerates them once they are asleep. After some searching, the two Sams find a previously unsuspected lower level, which houses an extensive cache of unawakened clones.

The sick Sam then takes a rover beyond the range of the jamming and calls home. Obscuring his videophone's camera, he is shocked when his daughter Eve, now 15 years old, answers. He learns that Tess died "some years ago". Before Eve can get her father to deal with her mysterious caller, Sam hangs up.

With the "rescue" team only hours away, the Sams know that they will be killed if they are both found at the base. The healthy Sam proposes sending the sick one back to Earth in a helium delivery vessel, reasoning that he is the more deserving since he "did the three years". He gets GERTY to start awakening another clone to put in the damaged rover to take the sick Sam's place. However, the sick Sam insists that the healthy Sam go instead while he returns to the rover to die, with the third clone left to man the station when the rescue team shows up.

GERTY points out that its records must be erased for the scheme to work; it gets the healthy Sam to wipe its memory by rebooting it. Before leaving, the second Sam also redirects a harvester to crash into a jammer antenna to ensure that all new clones can freely communicate with Earth. The helium-3 delivery vehicle containing Sam launches for Earth, and is seen by the sick Sam in his final moments, giving him the solace of knowing that his clone had made it off the Mining Base.

Newscast voice-overs in many languages detail the consequences of Sam's return to Earth: Lunar Industries' stock price crashes following accusations of criminal activities, and "Clone 6" gives testimony at a Board of Directors meeting in Seattle.

Moon is the first feature film directed by commercial director Duncan Jones, who co-wrote the script with Nathan Parker.[8] The film was specifically written as a vehicle for actor Sam Rockwell.[9] The film pays homage to the films of Jones' youth, such as 2001: A Space Odyssey (1968), Silent Running (1972), Solaris (1972), Alien (1979), Outland (1981), and THX 1138 (1971).[10] Jones described the intent, "[We] wanted to create something which felt comfortable within that canon of those science fiction films from the sort of late seventies to early eighties."[11] The director spoke of his interest in the lunar setting: "for me, the Moon has this weird mythic nature to it... There is still a mystery to it. As a location, it bridges the gap between science-fiction and science fact. We (humankind) have been there. It is something so close and so plausible and yet at the same time, we really don't know that much about it." The director described the lack of romance in the Moon as a location, citing images from the Japanese lunar orbiter SELENE, "It's the desolation and emptiness of it... it looks like some strange ball of clay in blackness... Look at photos and you'll think that they're monochrome. In fact, they're not. There simply are no primary colours." Jones made reference to the photography book Full Moon by Michael Light in designing the look of the film.[12]

Moon's budget was $5 million.[13] The director took steps to minimise production costs, such as keeping the cast small and filming in a studio.[11] Moon was produced at Shepperton Studios, in London, [8] where it was filmed in 33 days.[11][2] Jones preferred using models instead of digital animation.[10] Jones worked with Bill Pearson, the supervising model maker on Alien, to help design the lunar rovers and helium-3 harvesters in the film.[14] The moon base was created as a full 360-degree set, measuring 85–90 feet (26–27 m) long and approximately 70 feet (21 m) wide. The film's robot, GERTY, was designed to be bound to an overhead rail within the mining base since its mechanical tether was critical to the story's plot.[11] The visual effects were provided by Cinesite, which has sought cut-price deals with independent films.[15] Since Jones had an effects background with TV advertisements, he drew on his past experiences in creating special effects within a small budget.[11] 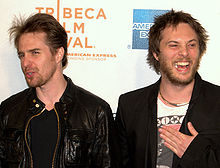 The film currently holds a 90% "Fresh" rating on Rotten Tomatoes, based on 173 reviews,[22] and holds an 8.0 rating on IMDb, ranking in the 'Top Rated "Sci-Fi" Titles'.[23] Moon received positive reviews at the Sundance Film Festival.[24] Damon Wise of The Times praised Jones' "thoughtful" direction and Rockwell's "poignant" performance. Wise wrote of the film's approach to the science fiction genre, "Though it uses impressive sci-fi trappings to tell its story—the fabulous models and moonscapes are recognisably retro yet surprisingly real—this is a film about what it means, and takes, to be human."[25] Duane Byrge of The Hollywood Reporter applauded screenwriter Nathan Parker's "sharp [and] individualistic" dialogue and the way in which Parker combined science fiction and Big Brother themes. Byrge also believed that cinematographer Gary Shaw's work and composer Clint Mansell's music intensified the drama. Byrge wrote, "Nonetheless, Moon is darkened by its own excellencies: the white, claustrophobic look is apt and moody, but a lack of physical action enervates the story thrust." The critic felt mixed about the star's performance, describing him as "adept at limning his character's dissolution" but finding that he did not have "the audacious, dominant edge" for the major confrontation at the end of the film.[26] Empire magazine praised Rockwell's performance, including it in '10 Egregious Oscar Snubs - The worthy contenders that the Academy overlooked' feature and referred to his performance as "one... of the best performances of the year."[27]

Roger Ebert gave the film 3½ stars out of 4, saying, "Moon is a superior example of that threatened genre, hard science-fiction, which is often about the interface between humans and alien intelligence of one kind of or [sic] other, including digital. John W. Campbell Jr., the godfather of this genre, would have approved. The movie is really all about ideas. It only seems to be about emotions. How real are our emotions, anyway? How real are we? Someday I will die. This laptop I'm using is patient and can wait."[28]

Reception from the scientific community

Moon was screened as part of a lecture series at NASA's Space Center Houston, at the request of a professor there. "He'd been reading online that we'd done this film about Helium-3 mining and that's something that people at NASA are working on," says Jones. "We did a Q&A afterward. They asked me why the base looked so sturdy, like a bunker, and not like the kind of stuff they are designing that they are going to transport with them. I said 'Well, in the future I assume you won't want to continue carrying everything with you, you'll want to use the resources on the moon to build things' and a woman in the audience raised her hand and said, 'I'm actually working on something called Mooncrete, which is concrete that mixes lunar regolith and ice water from the moon's polar caps.'"[29]

Jones is planning a follow-up graphic novel, titled Mute, which will serve as an epilogue to Moon. Should the project progress to a film, "Sam has agreed to do a little cameo in the next film," says Jones, who ultimately hopes to complete a trilogy of films set in the same fictional universe.[29][30]