This is a list of some of the equipment currently in use by the Bulgarian land forces.

Total units of equipment, incl. those in reserve: 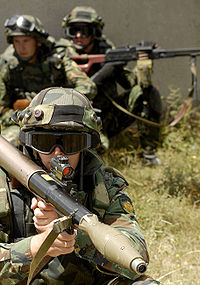 A Bulgarian soldier with an ATGL-L / mod. RPG-7

An exact number of each type of weapon in service cannot be established; a total of 192 BM-21 Grad, 2S1 Gvozdika and D-20 are in service.