Dimorphodon (pronounced /daɪˈmɔrfədɒn/) was a genus of medium-sized pterosaur from the early Jurassic Period. It was named by paleontologist Richard Owen in 1859. Dimorphodon means "two-form tooth", derived from Greek δι/di meaning 'two', μορφη/morphe meaning 'shape' and οδων/odon meaning 'tooth', referring to the fact that it had two distinct types of teeth in its jaws - which is comparatively rare among reptiles.

The first fossil remains now attributed to Dimorphodon were found in England by fossil collector Mary Anning, at Lyme Regis in Dorset, UK in December 1828.[1] This region of Britain is now a World Heritage Site, dubbed the Jurassic Coast; in it layers of the Blue Lias are exposed, dating from the Hettangian-Sinemurian. The specimen was acquired by William Buckland and reported in a meeting of the Geological Society on 5 February 1829.[2] In 1835, after a thorough study by William Clift and William John Broderip, this report, strongly expanded, was published in the Transactions of the Geological Society, describing and naming the fossil as a new species. As was the case with most early pterosaur finds, Buckland classified the remains in the genus Pterodactylus, coining the new species Pterodactylus macronyx.[3] The specific name is derived from Greek makros, "large" and onyx, "claw", in reference to the large claws of the hand. The specimen, presently NHMUK PV R 1034, consisted of a partial and disarticulated skeleton on a slab, lacking the skull. Buckland in 1835 also assigned a piece of jaw from the collection of Elizabeth Philpot to P.macronyx. Later, the many putative species assigned to Pterodactylus had become so anatomically diverse that they began to be broken into separate genera.

In 1858, Richard Owen reported the find of two new specimens, NHMUK PV R 41212 and NHMUK PV R 1035, again partial skeletons but this time including the skulls. Having found the skull to be very different from that of Pterodactylus, Owen assigned Pterodactylus macronyx its own genus, which he named Dimorphodon.[4] His first report contained no description and the name remained a nomen nudum. In 1859 however, a subsequent publication by Owen provided a description.[5] After several studies highlighting aspects of Dimorphodon 's anatomy, Owen in 1874 made NHMUK PV R 1035 the holotype.[6]

Meanwhile, though Dimorphodon is not a very common fossil, other fragmentary specimens were found. Some of these were acquired by Othniel Charles Marsh between 1873 and 1881 from the London fossil dealer Bryce McMurdo Wright. One of these had been recovered from early Jurassic strata at the south bank of the Severn river, at the Aust Cliff.[7]

Dimorphodon had a large, bulky skull approximately 22 centimetre in length, whose weight was reduced by large openings separated from each other by thin bony partitions.[7] Its structure, reminiscent of the supporting arches of a bridge, prompted Richard Owen to declare that, in far as achieving great strength from light-weight materials was concerned, no vertebra was more economically constructed; Owen saw the vertebrate skull as a combination of four vertebrae modified from the ideal type of the vertebra.[8] The front of the upper jaw had four or five fang-like teeth followed by an indeterminate number of smaller teeth; the maxilla of all exemplars is damaged at the back. The lower jaw had five longer teeth and thirty to forty tiny, flattened pointed teeth, shaped like a lancet.[7] Many depictions give it a speculative puffin-like 'beak' because of similarities between the two animals' skulls.

Skeleton of D. macronyx in the conventional quadrupedal pose, though in the agile version proposed by Seeley

The body structure of Dimorphodon displays many "primitive" characters, such as, according to Owen, a very small brain-pan[citation needed] and proportionally short wings.[7] The first phalanx in its flight finger is only slightly longer than its lower arm.[7] The neck was short but strong and flexible and may have had a membraneous pouch on the underside. The vertebrae had pneumatic foramina, openings through which the air sacks could reach the hollow interior. Dimorphodon had an adult body length of 1 metre (3.3 ft) long, with a 1.45 meter (4.6 ft) wingspan.[7][9]

The tail of Dimorphodon was long and consisted of thirty vertebrae. The first five or six were short and flexible but the remainder gradually increased in length and were stiffened by elongated vertebral processes.[7] The terminal end of the tail may have borne a Rhamphorhynchus-like tail vane, although no soft tissues have yet been found of Dimorphodon to confirm this speculation.[7]

Owen saw Dimorphodon as a quadruped. He speculated that the fifth toe supported a membrane between the tail and the legs and that the animal was therefore very ungainly on the ground.[7] His rival Harry Govier Seeley however, propagating the view that pterosaurs were warm-blooded and active, argued that Dimorphodon was either an agile quadruped or even a running biped due to its relatively well developed hindlimbs and characteristics of its pelvis.[10] This hypothesis was revived by Kevin Padian in the nineteen eighties.[11] However, fossilised track remains of other pterosaurs (ichnites) show a quadrupedal gait while on the ground and these traces are all attributed to derived pterosaurs with a short fifth toe. Dimorphodon's was elongated, clawless, and oriented to the side.[7] David Unwin has therefore argued that even Dimorphodon was a quadruped, a view confirmed by computer modelling by Sarah Sangster.[12] 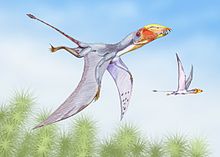 Restoration of a pair of D. macronyx

Our knowledge of how Dimorphodon lived is limited. It perhaps mainly inhabited coastal regions and might have had a very varied diet. Buckland suggested it ate insects. Later it became common to depict it as a piscivore (fish eater), though Buckland's original idea is more well supported by biomechanical studies. Dimorphodon had an advanced jaw musculature specialized for a "snap and hold" method of feeding. The jaw could close extremely quickly but with relatively little force or tooth penetration. This, along with the short and high skull and longer, pointed front teeth suggest Dimorphodon was an insectivore, though it may have occasionally eaten small vertebrates and carrion as well.[13]