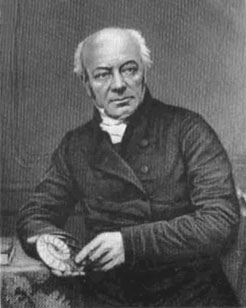 The Very Rev. Dr William Buckland DD (, , – Islip, , ) was an English geologist, palaeontologist and , who wrote the first full account of a fossil dinosaur. He was a proponent of , who later became convinced of ' glaciation theory.

Buckland was born at in and, as a child, would accompany his father, the Rector of Templeton and Trusham, on his walks where interest in road improvements led to collecting fossil shells, including s, from the lias rocks exposed in local quarries.

He won a scholarship in 1801, to study for the ministry at , also attending the lectures of on mineralogy and chemistry, as well as developing an interest in geology and carrying out field research on strata, during vacations. Having taken his BA in 1804, he went on to obtain his MA degree in 1808. He then became a of Corpus Christi in 1809, was ordained as a priest and continued to make frequent geological excursions, on horseback, to various parts of England, , and . In 1813, he was appointed reader in mineralogy, in succession to , giving lively and popular lectures with increasing emphasis on geology and palaeontology. As (unofficial) curator of the , he built up collections, touring Europe and coming into contact with scientists including .

In 1818, Buckland was elected a fellow of the . That year he persuaded the to endow an additional Readership, this time in Geology and he became the first holder of the new appointment, delivering his inaugural address on . This was published in 1820 as "Vindiciæ Geologiæ; or the Connexion of Geology with Religion explained", both justifying the new science of geology and reconciling geological evidence with the biblical accounts of creation and Noah's Flood. At a time when others were coming under the opposing influence of 's theory of uniformitarianism, Buckland developed a new hypothesis that the word "beginning" in meant an undefined period between the origin of the earth and the creation of its current inhabitants, during which a long series of extinctions and successive creations of new kinds of plants and animals had occurred. Thus, his theory incorporated a version of or . Buckland believed in a global deluge during the time of Noah but was not a supporter of as he believed that only a small amount of the strata could have been formed in the single year occupied by the deluge. [ [http://www.bringyou.to/apologetics/p82.htm History of the Collapse of Flood Geology and a Young Earth ] ]

From his investigations of fossil bones at , in , he concluded that the cave had actually been inhabited by hyaenas in antediluvian times, rather than the fossils being remains of animals that had perished in the Flood and then carried from the tropics by the surging waters, as was then thought. He developed these ideas into his great scientific work [http://books.google.com/books?id=VsoQAAAAIAAJ&dq=william+buckland&ie=ISO-8859-1 "Reliquiæ Diluvianæ, or, Observations on the Organic Remains attesting the Action of a Universal Deluge"] which was published in 1823 and became a best seller.

He continued to live in Corpus Christi College and, in 1824, he became president of the . Here he announced the discovery, at Stonesfield, of fossil bones of a giant reptile which he named ("great lizard") and wrote the first full account of what would later be called a .

In 1825, Buckland resigned his college fellowship: he planned to take up the living of in but, before he could take up the appointment, he was made a Canon of Christ Church, a rich reward for academic distinction without serious administrative responsibilities. In December of that year he married Mary Morland of Abingdon, , an accomplished illustrator and collector of fossils. Their honeymoon was a year touring Europe, with visits to famous geologists and geological sites. She continued to assist him in his work, as well as having nine children, five of whom survived to adulthood. His son Frank Buckland became a well-known practical naturalist, author, and Inspector of Salmon Fisheries. On one occasion, Mary helped him decipher footmarks, found in a slab of sandstone, by covering the kitchen table with paste, while he fetched their pet tortoise and confirmed his intuition, that tortoise footprints matched the fossil marks.

His passion for scientific observation and experiment extended to his home life. Not only was his house filled with specimens – animal as well as mineral, live as well as dead – but he claimed to have eaten his way through the animal kingdom: zoophagy. The most distasteful items were mole and bluebottle; panther, crocodile and mouse were among the other dishes noted by guests. , a famous English and contemporary, recalled, “Talk of strange relics led to mention of the heart of a French King preserved at Nuneham in a silver casket. Dr. Buckland, whilst looking at it, exclaimed, ‘I have eaten many strange things, but have never eaten the heart of a king before,’ and, before anyone could hinder him, he had gobbled it up, and the precious relic was lost for ever.” The heart in question is said to have been that of . Buckland was followed in this bizarre hobby by his son Frank.

In 1826 Buckland discovered the in , the oldest human remains found in the United Kingdom to date.

He had been helping and encouraging for some years and in 1831 was able to suggest a very good starting point in South Wales for Murchison's researches into the rocks which he later described in great detail in his 'The Silurian System'.

In 1832 he presided over the second meeting of the British Association, which was then held at Oxford.

He was commissioned to contribute one of the set of eight "", "On the Power, Wisdom and Goodness of God, as manifested in the Creation". This took him almost five years' work and was published in 1836 with the title [http://books.google.com/books?id=MR4HAAAAQAAJ&pg=PA1&dq=william+buckland&ie=ISO-8859-1 "Geology and Mineralogy considered with reference to Natural Theology"] . His section was a detailed compendium of his theories of day-age, gap theory and theistic evolution. In response, computing pioneer produced his "Ninth Bridgewater Treatise".

By this time Buckland was a prominent and influential scientific celebrity and a friend of the prime minister, Sir . In co-operation with and , he prepared the report leading to establishment of the Geological Survey of Great Britain.

Having become interested in the theory of , that polished and striated rocks as well as transported material, had been caused by ancient glaciers, he travelled to , in 1838, to meet Agassiz and see for himself. He was convinced and was reminded of what he had seen in Scotland, Wales and northern England but had previously attributed to the Flood. When Agassiz came to Britain for the meeting of the British Association, in 1840, they went on an extended tour of Scotland and found evidence there of former glaciation. In that year Buckland had become president of the Geological Society again and, despite their hostile reaction to his presentation of the theory, he was now satisfied that glaciation had been the origin of much of the surface deposits covering Britain.

In 1845 he was appointed by Sir Robert Peel to the vacant Deanery of Westminster (he succeeded ). Soon after, he was inducted to the living of Islip, near Oxford, a preferment attached to the deanery. As Dean and head of Chapter, Buckland was involved in repair and maintenance of and in preaching suitable sermons to the rural population of Islip, while continuing to lecture on geology at Oxford. In 1847, he was appointed a trustee in the and, in 1848, he was awarded the , by the Geological Society of London.

Around the end of 1849, he contracted a disease which increasingly invalided him until his death in 1856. Post-mortem examination identified a tubercular infection of the upper cervical vertebrae which had spread to the brain. [Burgess G.H.O. 1967. "The curious world of Frank Buckland". Baker, London. p67] The plot for his grave had been reserved but, when the gravedigger set to work, it was found that an outcrop of solid limestone lay just below ground level and explosives had to be used for excavation. This may have been a last jest by the noted geologist, reminiscent of Richard Whatley’s "Elegy intended for Professor Buckland" written in 1820::Where shall we our great Professor inter :That in peace may rest his bones? :If we hew him a rocky sepulchre :He’ll rise and break the stones :And examine each stratum that lies around :For he’s quite in his element underground

*Earl of Bridgewater for other "Bridgewater Treatise"
*The Great Chain of History: William Buckland and the English School of Geology 1814-1849. by Nicolaas Rupke. Oxford University Press. 1983.
*, a wrinkle-ridge on the Moon named after him.
*Buckland Island (known today as Ani-Jima), in the Bonin Islands (Ogasawara-Jima), named after Professor Buckland by Captain Beechey in 9 June 1827. By coincidence (or not!), in the Godzilla films Monster Island is sometimes located in the Ogasawara-Jima island chain. Quite appropriate for a dinosaur-like monster (Helas, no Megalosaurus...) to make a homebase.

* [http://www.oum.ox.ac.uk/learning/pdfs/buckland.pdf Buckland at the Oxford University Museum of Natural History]