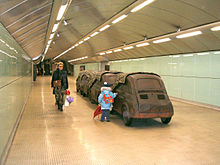 The upgrading of the Metropolitana di Napoli has not just been through better integration of the network, but also the visual appearance of the stations, including the addition of modern art works

With an urban population (central area) of approximately 1,000,000 inhabitants, Naples is Italy's third most populated city after Rome and Milan, but it is the second metropolitan area of the country after Milan, with a population of 4.434.136.[1]

A major project is now underway to restructure the city's transport system and to connect the existing lines into one integrated network. It aims at a system with a total of ten lines, new interchange stations and enhanced parking areas.

The network is coordinated by Regione Campania through the Agenzia Campana per la Mobilità Sostenibile (Campania Agency for Sustainable Mobility). The integrated tariff system which allows travel across all forms of public transport within Naples is managed by the UnicoCampania consortium.

The Ferrovia Cumana, currently part of the metro system, was the first line to be opened in 1889.

In 1911 construction on the urban section of the Naples to Rome railway, the Passante line was commenced, and although it was suspended for the duration of World War I, the line was eventually opened on 28 September 1925 with an urban railway service, the first in Italy. This urban service is now part of the metro system as line 2.

Although progress had been made from the early setbacks and problems, it was still apparent by 1997 that the network suffered badly from the lack of network integration and poor connections, as well as the fact that large areas of Naples were not close to stations. In 1997 the Comune di Napoli government drew up a new Piano Comunale dei Trasporti di Napoli (Naples City Transport Plan) which called for a review of the network, improved controls over maintenance expenditure and general finances, a new tariff control system and better management of the urban rail network of Naples.[3]

In conjunction with the regional government of Campania, the comune government of Naples incorporated a new fully state-controlled joint-stock corporation called Metronapoli, which is 99% controlled by the comune and 1% controlled by ANM (Azienda Napoletana Mobilità), with a mission statement of: "providing an efficient public rail transport service of quality to the city".

Metronapoli took over control for running the urban rail transport network of Naples as part of a planned massive re-invigoration of public transport in the Campania region On 1 February 2001. The regional government announced a rivoluzione del ferro (rail revolution) which involved a planned expansion of the region's network at a cost of €3.8 billion euros, and would see the construction of 1,400 km of new tracks and 80 new stations for a total of 423 stations on the network within Campania.

On 3 December 2005, the CIPE, (Interdepartmental Committee for Economic Planning) announced over €600 million worth of funding to be spent the Metropolitana di Napoli network. €323 million was allocated for Montesanto stazione (Line 5 and Line 7), €61.1 million for Giornate interchange (Line 1, Line 5, and Line 7), with both projects to be completed by 2010, as well as €119.7 million to be spent to improve the section of Line 1 between Capodichino stazione and Centro Direzionale and €100 million for the San Pasquale stazione to Municipio stazione section.[4]

From 23 December 2006 to 20 February 2007 a special exhibition of models and multimedia presentations was held at Castel dell'Ovo to showcase all of the planned improvements to the Metropolitana di Napoli network, and was extremely well received by Neapolitans.

Metronapoli is the Neapolitan public transport management company. Founded on 26 July 2000 as a fully state-controlled joint-stock corporation, it became operational on 1 February 2001. It is owned and controlled by two entities: the Comune of Naples, which owns 99% of shares, and the Azienda Napoletana Mobilità (Neapolitan Mobility Company), which owns the remaining 1%.

Metronapoli is currently responsible for the transport services and maintenance of Line 1 and Line 6, pedestrian subways, and the funicular railways (Chiaia, Mergellina and Montesanto). Metronapoli is also responsible for developing the various interchange links of Line 1 with Line 2 and the funicular railways, and is working with the National Archaeological Museum of Naples to ensure all development work is done in accordance with procedures to ensure the protection of historic monuments and archaeological remains.

Service on line 2 is managed by Trenitalia. RFI is the owner of the railway infrastructure.

The Circumvesuviana is a narrow-gauge railway connecting cities and towns near Naples, Italy. Its tracks run around the base of Mount Vesuvius, hence the name, though they do not in reality completely encircle it. There are 96 stations in total on the network, and 138 km of track.

Line 3 and line 4 are part of Circumvesuviana network.

SEPSA in a public company. Line 5 (part of Circumflegrea railway) and Cumana railway are managed by SEPSA.

MCNE is a public company. Rainbow line and 2 regional railways (Benevento-Napoli and Piedimonte Matese-Napoli) are managed by MCNE. 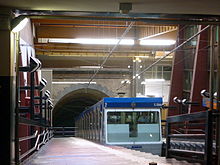 All of these are necessary due to the extremely steep gradient with which the hills rise. The oldest of these inclined cable-railways (the Montesanto, connecting Vomero with the city centre) has been operating since 30 May 1891. The four funicular lines serve 16 stations and currently provide transport for over 60,000 passengers each day.

As part of the plan to better integrate the public transport of Naples, all four furnicular lines will connect with Metropolitana lines in order to provide better connection services. Stazione Vanvitelli is connected hub of three of the funicular lines, providing direct connections to Line 1. 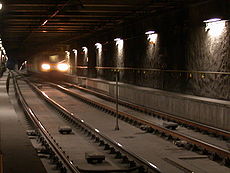 A train (line 1) arriving at the Vanvitelli station.

The original Giranapoli system was replaced in 2001-02 with a new automated system. The current fare structure for the Metropolitana di Napoli is a universal system across all forms of public transport in the city and the region of Campania as a whole. Therefore tickets are valid for use on all buses, funiculars, metro and local railways in Naples and adjacent municipalities. The universal system is referred to as 'Uniconapoli', a sub-branch of 'Consorzio Uniconcampania'.[2]

The whole province is divided into six concentric zones labeled as zones 0-5, expanding outwards from Naples itself (zone 0).

Tickets are sold by station booking-offices and kiosks, and need to be validated when first used. Every station on the network is now either equipped with automated ticketing machines, or being upgraded to incorporate them. These machines are all multi-lingual in Italian, English, French, German and Spanish.

These prices were current as of 1 October 2008.

More detailed information on fares and ticketing can be found on the Consorzio Uniconcampania website here.

A smartcard ticketing operation has been planned for introduction to the network, that may operate in a similar fashion to London Underground's Oystercard. The name of this smartcard is Jamme Card, from neapolitan dialect jamme (Let' s go)

Trains operate from 6:00 to 23:00 every day of the year. Headway is 8–10 minutes, except during morning and evening rush hours, when it is reduced to 6 minutes, and after 21:00 when the headway is about 15 minutes. 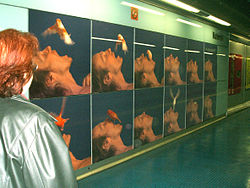 An example of the Contemporary Art installations that can be found at various stations on Linea 1. This work can be seen at stazione Materdei.

Line 1 has been dubbed 'Il Metrò dell'Arte' (The Art Metro) by Metronapoli as eight stations have been upgraded to exhibit works of art. These include both permanent exhibits and the provision for temporary displays. It is intended that this theme will continue as more of the planned stations on Line 1 are opened.

Museum station (stazione Museo) also displays archaeological remains and exhibits that were unearthed during the construction of the station, while others have been transferred to the Museo Archeologico Nazionale di Napoli (Naples National Archaeological Museum) above the station, from which it is named.[5]

Another initiative recently started on the Metropolitana di Napoli was to provide free books for riders on the network.[6]