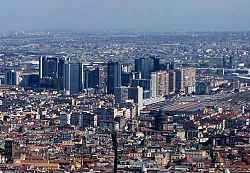 Aerial view of the Centro Direzionale.

The Centro Direzionale is a service center in Naples, Italy. The district is mainly devoted to business.

The project of the Centro Direzionale dates back to 1964. It was designed in 1982 by Japanese architect Kenzo Tange.

The Centro Direzionale is more than one square kilometer wide and is situated in the Poggioreale section of the city, near the central train station. The Center is in what was traditionally the worst part of the city, adjacent to the Poggioreale prison, the largest prison in southern Italy.

The layout include 18 "islands" of buildings, with high-rises up to 100 meters. There are office buildings as well as residential flats. The Center is meant to accommodate most, if not all, of the administrative offices of the city of Naples, such as the new Hall of Justice. It also includes a pedestrian zone at ground level with shops, restaurants and hotels. There is an underground parking facility with escalators running up into the middle of the large pedestrian concourse, an area adorned with fountains, benches, greenery and a church.

The Centro Direzionale is home to the tallest building in southern Italy, the Telecom Italia Tower.

It is served by an underground train station on the Circumvesuviana line.