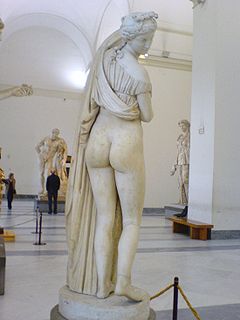 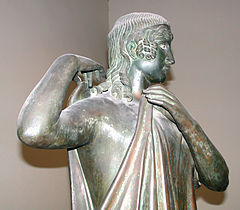 Young Dancer, bronze from the Villa of the Papyri. 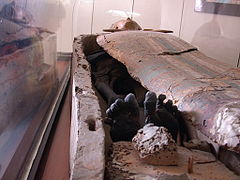 The Naples National Archaeological Museum (Museo Archeologico Nazionale di Napoli) is a museum in Naples, southern Italy, at the northwest corner of the original Greek wall of the city of Neapolis. The museum contains a large collection of Roman artifacts from Pompeii, Stabiae and Herculaneum. The collection includes works of the highest quality produced in Greek, Roman and Renaissance times. It is the most important Italian archaeological museum.

The museum hosts extensive collections of Greek and Roman antiquities. Their core is from the Farnese Collection, which includes a collection of engraved gems (including the Farnese Cup, a Ptolemaic bowl made of sardonyx agate and the most famous piece in the "Treasure of the Magnificent", and is founded upon gems collected by Cosimo de' Medici and Lorenzo il Magnifico in the 15th century) and the Farnese Marbles.

Charles III of Spain founded the museum in the 1750s. The building he used for it had been erected as a cavalry barracks and during its time as the seat of the University of Naples (from 1616 to 1777) was extended, in the late 18th century.

Among the notable works found in the museum are:

The greater part of the museum's classical sculpture collection largely comes from the Farnese Marbles, important since they include Roman copies of classical Greek sculpture, which are in many cases the only surviving indications of what the lost works by ancient Greek sculptors such as Calamis, Kritios and Nesiotes looked like. Many of these works, especially the larger ones, have been moved to the Museo di Capodimonte for display in recent years.

Bronzes from the Villa of the Papyri

The museum's Mosaic Collection includes a number of important mosaics recovered from the ruins of Pompeii and the other Vesuvian cities.

The museum has the third largest collection of Egyptian artifacts in Italy, after the Vatican Museum and the Museo Egizio in Turin. It is made up primarily of works from two private collections, assembled by Cardinal Borgia in the second half of the 18th century, and Picchianti in the first years of the 19th. In the recent rearrangement of the galleries the two nuclei have been exhibited separately, while in the connecting room other items are on display, including Egyptian and "pseudo-Egyptian" artefacts from Pompeii and other Campanian sites. In its new layout the collection provides both an important record of Egyptian civilization from the Old Kingdom (2700-2200 B.C.) up to the Ptolemaic-Roman era.[1]