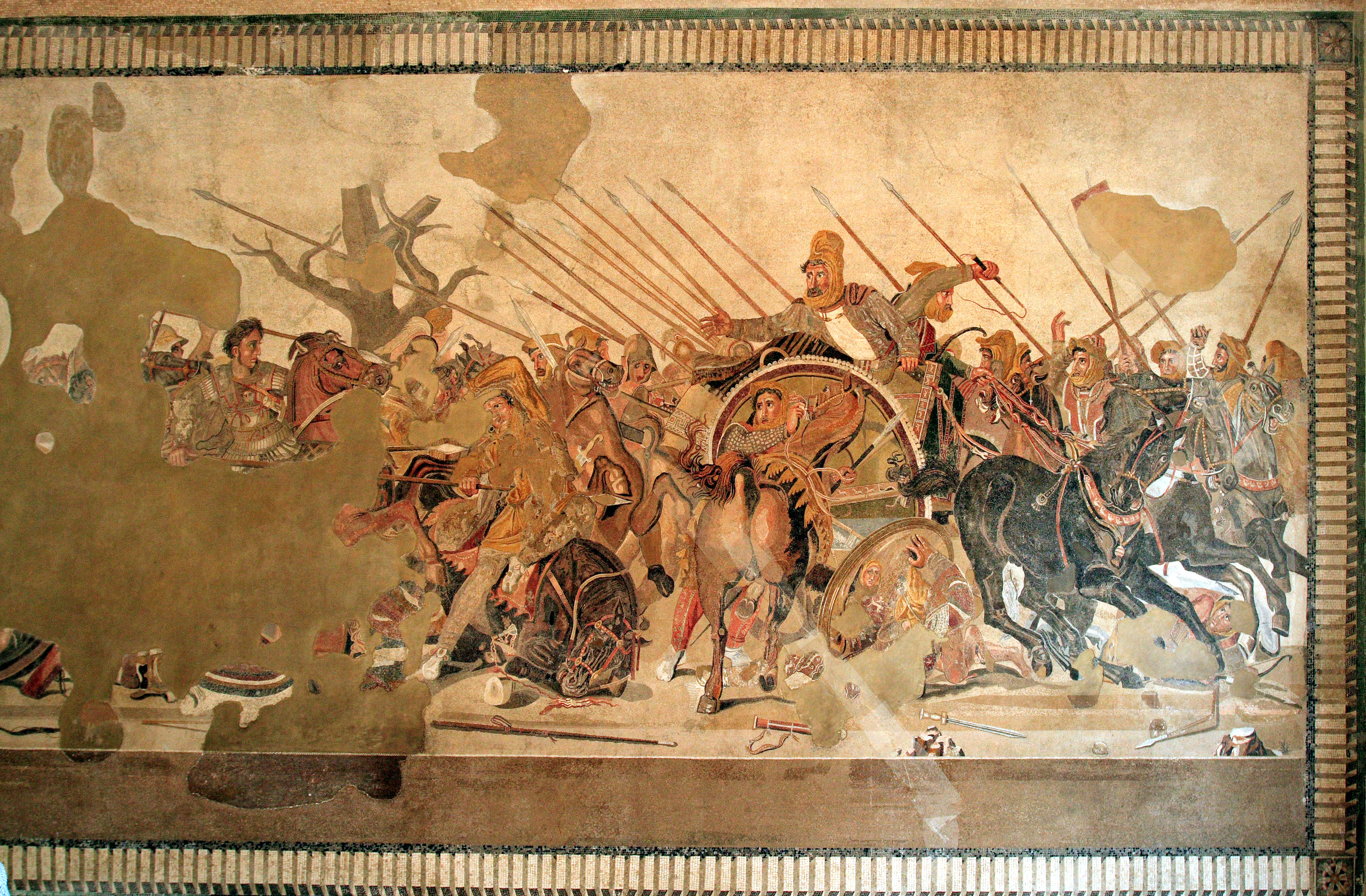 The mosaic depicts a battle during which Alexander faced and attempted to capture or kill Darius. Both the of 333 BC and the in 331 BC fulfill these criteria, though the first is traditionally held to be likely. Recently, scholars have begun to favor the latter due to the presence of a large, lifeless tree in the center of the mosaic.

The mosaic is generally held to be a copy of either a painting by contemporary with Alexander himself, or a lost late fourth century BC by the painter . The latter is mentioned by (XXXV, 110) as a commission for the Macedonian king .Fact|date=February 2007 The work which we select from these two may influence our opinion on which battle is shown.

Despite being partially ruined, the two main figures are easy to recognize.
*The portrait of Alexander is one of his most famous. Alexander's breastplate depicts Medusa, the famous , and his wavy hair is typical of royal portraiture as established in Greek art of the fourth century B.C. He is portrayed sweeping into battle at the left, on his famous horse, , and focusing his gaze on the Persian leader.
*Darius is shown in a chariot. He seems to be desperately commanding his frightened charioteer to flee the battle, while stretching out his hand either as a mute gesture to Alexander, or possibly after throwing a . He has a worried expression on his face. The charioteer is whipping the horses as he tries to escape.

The Persian soldiers behind him have expressions of determination and .

Darius's brother Oxyathres is also portrayed, sacrificing himself to save the King.

Radical - as in the central horse, seen from behind - and the use of shading to convey a sense of mass and volume enhance the naturalistic effect of the scene. Repeated diagonal spears, clashing metal, and the crowding of men and horses evoke the din of battle. At the same time, action is arrested by dramatic details such as the fallen horse and the Persian soldier in the foreground who watches his own death throes reflected in a shield.

History of the mosaic

The mosaic is made of about one and a half million tiny coloured tiles called , arranged in gradual curves called "," (literally, "worm work," because they seem to replicate the slow motion of a crawling worm). The mosaic is an unusually detailed work for a private residence and was probably commissioned by a wealthy person or family. Another theory states that it might have been an originally Hellenic mosaic that was looted from Greece and carried off to Rome. Italian archaeologist supports the first theory.

The mosaic was rediscovered on , and in the September of 1843 moved to , where it is currently preserved on a wall ("not" floor as it was found) in the Museo Archeologico Nazionale.

In 2003 the () in , Italy, proposed to create a copy of the mosaic. When they had received approval, the mosaic master Severo Bignami and his eight-person team took a large photograph of the mosaic, made a tracing of the image with a dark marker and created a negative impression of the mosaic.

The team recreated the mosaic with about 2 million pieces of various marble types. When they had placed all the pieces, they covered the result with a layer of glue and gauze and pulled it out of the clay. They placed each section on synthetic concrete and then united the sections with the compound of glasswool and plastic.

Photos of the process of making the copy are available at the website of the studio owned by two of the mosaicists that worked on the project, at [http://www.kokomosaico.com/eng/battaglia_di_alessandro/default.html Koko Mosaico]