Endgame is the twelfth studio album by the American heavy metal band Megadeth. It was released via Roadrunner Records (the second of three Megadeth records) on September 9, 2009 and was produced by Dave Mustaine and Andy Sneap. Endgame was the first album featuring guitarist Chris Broderick, following Glen Drover's departure in 2008, and was the band's last studio album with bass guitarist James LoMenzo; original bassist Dave Ellefson would rejoin the band only several months after the album's release.[2]

There are eleven tracks on the album, with lyrics inspired by subjects ranging from The Lord of the Rings and the Financial crisis of 2007–2010, to insanity, torture and crime. Two singles were released from the album: "The Right to Go Insane" and "Head Crusher", the latter of which had been nominated for "Best Metal Performance" at the 52nd annual Grammy Awards. Endgame entered the Billboard 200 at number 9 (marking the band's tenth overall top 10 debut) and reached number 1 on the U.S. Top Hard Rock Albums chart, and as of April 2011 has sold around 150,000 copies in the U.S.[3] The album received generally positive reviews from music critics, and was thought of continuing the success from the band's previous album, United Abominations. 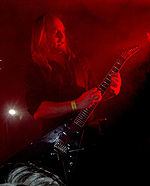 Andy Sneap was the producer for Endgame. This was the second Megadeth album he had produced, having worked on their previous studio effort, United Abominations, as well.

On May 27, 2009, Dave Mustaine confirmed 12 songs were complete and they were currently mixing and mastering the record.[5] The first preview of music from Endgame was a six-minute video featuring Andy Sneap, describing the process of mixing the new Megadeth track "Head Crusher" at his studio in Derbyshire, England.[6] In the video, Sneap had called the then-upcoming album "old-school".[6] Endgame was recorded at the band's own personal studio, "Vic's Garage", in San Marcos, California.[1] The tracklisting on was initially revealed on July 2, 2009,[7] although several track titles were later shortened for the final release.[8]

Dave Mustaine had said about the album: "It is fast, it is heavy, there is singing, yelling, speaking, and guest voices (maybe not singing – more like in "Captive Honour"), the soloing is insane."[9][10]

On the September 10, 2009 edition of the Alex Jones Show, Jones suggested that the title and cover of Endgame was inspired by the documentary Endgame, which he wrote and directed. Jones stated that he had sent Dave Mustaine a copy of the film after an appearance on the Alex Jones Show in 2008.[11] It was later confirmed by Dave Mustaine in a subsequent appearance on the Jones' show that the album name was inspired by the Endgame documentary.[12]

Megadeth on tour promoting Endgame live in Haapsalu, Estonia in 2010.

As of May 19, Megadeth had finished recording the album and on June 18, the album title was revealed to be Endgame.[13] The cover artwork was officially released onto the internet on July 27, 2009.[14] John Lorenzi, who designed the cover for the previous album, United Abominations, returned to design the album cover for Endgame[15] The release date for Endgame was announced on the Megadeth official website as September 15, 2009, and Metal Hammer magazine's website were the first to review the album track by track.[16] A week after its release, the album had sold 45,000 copies in the United States and 8,200 copies in Canada,[17] debuting at number nine on the Billboard 200, falling down one place from when United Abominations debuted at number eight in 2007.[18] The album also placed as #1 on the Hard Rock Albums chart and #2 on the Rock Albums chart.[19]

On May 10, 2009 Dave Mustaine announced on TheLiveLine that some music from Megadeth would appear in the film Land of the Lost to raise awareness for Endgame.[20] Whether this would be music from the new record was not entirely clear, however during the message Mustaine left on TheLiveLine, it was stated that there was new music playing in the background of the message.[21] Ultimately, parts of the song "The Right To Go Insane", can be heard near the end of the film.[22] Another song from the album, "This Day We Fight!", was featured as a playable song on Guitar Hero: Warriors of Rock.[23] As part of the promotion for Endgame, Megadeth made an appearance on the September 17, 2009 edition of Late Night with Jimmy Fallon, performing "Head Crusher".[24]

Megadeth started touring in November 2009 in support of the album in Grand Rapids, Michigan and ended on December 13, in Las Vegas, Nevada. The Tour featured Machine Head, Suicide Silence, Warbringer, and Arcanium.[25] In January 2010, Megadeth was set to embark on the "American Carnage" tour with Slayer and Testament, two of the largest bands of the thrash and heavy metal scene. The tour was scheduled to begin on January 18,[26] but was ultimately postponed until later in the summer due to Tom Araya's back surgery.[27]

Endgame's lyrical themes are diverse. Mustaine has said that "How The Story Ends" was about "warrior creed from the great Sun Tzu with the use of drums and flags in ancient war" and "This Day We Fight!" drew inspiration from "an impassioned plea from Aragorn to his loyal fighters in Lord of the Rings trilogy".[10] "Head Crusher", on the other hand describes a medieval torture device. "1,320" was written about nitro fuel funny cars.[10] The title track was written "about a bill that ex-President George W. Bush signed into law that gave him the power to put American citizens in detention centers here in the United States".[10] "44 Minutes", described by Mustaine as having a "great lyric", is about the North Hollywood shootout of 1997,[10] and the title of the song itself is derived directly from the film 44 Minutes: The North Hollywood Shoot-Out (an FX Network original film that was based on the event.)[28] "The Hardest Part of Letting Go…Sealed With a Kiss" is, according to PopMatters reviewer Adrien Begrand, a "twisted love [song]"[29] Begrand describes "The Right to Go Insane" as "[Mustaine's] usual 'I’m slowly going nuts' shtick".,[29] however, Mustaine stated that the song was "about having been wiped out, like so many Americans, from the recession and potential depression years of 2000".[9] Mustaine said that "Bite the Hand" was written "about the greed of the fiduciary leaders of the financial world and how they just didn't care about the responsibility they had to the public."[9]

The album's lead single was "Head Crusher".[30] According to Roadrunner Records official website, a download of "Head Crusher" was available for 24 hours on July 7, starting at 11:00 AM Eastern Time Zone (EDT) (the availability of the download ended the morning of July 8).[31] The track was previously available for listening by calling Dave Mustaine's number through the TheLiveLine.com, a service he launched that enables musicians to connect to their audience over the phone.[32] The song was eventually nominated for "Best Metal Performance" for the 52nd annual Grammy Awards – the band's first Grammy nomination since the 1997 song "Trust" – and received a music video directed by Bill Fishman.[33][34]

The second single off the album was announced eight months later, and it was confirmed to be "The Right to Go Insane".[35] A music video for "The Right to Go Insane" (roughly based on the story of Shawn Nelson) was released in April 2010, making it the first video with David Ellefson since his return to the band. The video premiered live at Austin, Texas on March 26 during their Rust in Peace anniversary tour.[36] The song hit position 34 on the Hot Mainstream Rock Tracks.[37]

Endgame received generally positive reviews from critics. Stephanie Burkett from BBC said that the album is "their most reliable and proficient album since Rust in Peace." She also noted that Megadeth "are once again asserting their right to be considered one of the best and most consistent heavy metal groups on the planet."[40] Chad Bowar of About.com awarded four and a half stars saying, "Megadeth is still at the top of their game. Endgame has some old-school moments, but also modern ones. 2007’s United Abominations garnered a lot of critical praise and was on many year-end best of lists that year... Endgame is even better."[38] Allmusic's Eduardo Rivadavia said that "Megadeth's second release for Roadrunner, Endgame, whose title apparently refers to "coming full circle" rather than any sort of goodbye, and finds the latest iteration of Megadeth – debuting new guitarist Chris Broderick (ex-Nevermore, Jag Panzer) – working primarily within their technical thrash comfort zone (think Peace Sells through Rust in Peace), with only a few latter-day elements and rare experimental diversions."[39]

Adrien Begrand of Popmatters noted that "not a moment is wasted on Endgame" and said "it's all due to Mustaine sticking to his strengths, and with the extraordinarily talented Broderick as his new wingman, the record positively scorches with an intensity we haven’t heard since Rust in Peace. With its furious back-and-forth solos, opening instrumental 'Dialectic Chaos' wastes no time in showcasing that dynamic between Mustaine and Broderick, and combined with the pure speed of 'This Day We Fight!', longtime fans will be instantly reminded of the bracing 'Into the Lungs of Hell'/'Set the World Afire' one-two punch that kicks off 1988's great So Far, So Good... So What!."[29] Mark Eglinton of The Quietus described the album as "a return to form" for Megadeth.[44] Musician Slash gave a favorable review to Endgame via twitter.[46]