Michel Houellebecq (French pronunciation: [miʃɛl wɛlˈbɛk]) (born Michel Thomas), born 26 February 1958 or 1956 (birth certificate)[1] on the French island of Réunion, is a controversial and award-winning French author, filmmaker and poet. To admirers he is a writer in the tradition of literary provocation that reaches back to the Marquis de Sade and Baudelaire; to detractors he is a peddler of sleaze and shock. Having written poetry and a biography of the horror writer H. P. Lovecraft he brought out his first novel Extension du domaine de la lutte in 1994. Les particules élémentaires followed in 1998 and Plateforme in 2001. After a publicity tour for this book, which led to his being taken to court for inciting racial hatred, he went to Ireland to write.[2] He lived in Ireland for many years, and now lives in Spain.[3]

The son of Lucie Ceccaldi, an Algerian-born French doctor, and her husband,[4] René Thomas, a ski instructor and mountain guide, Houellebecq was born on the French island of Réunion. He also lived in Algeria from the age of five months until 1961, with his maternal grandmother. As his website gloomily states, his parents "lost interest in his existence pretty quickly" and at the age of six, he was sent to France to live with his paternal grandmother, a communist, while his mother headed off to lead the hippie lifestyle. His paternal grandmother's maiden name was Houellebecq, which became his pen name. Later, he went to Lycée Henri Moissan, a high school at Meaux in the north-east of Paris, as a boarder. He then went to Lycée Chaptal in Paris to follow preparation courses in order to join French Grandes écoles (elite schools). He began attending the Institut National Agronomique Paris-Grignon in 1975. He started a literary review called Karamazov and wrote poetry. 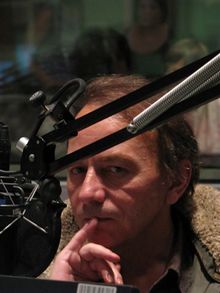 Houellebecq graduated as an agronomical engineer in 1980, got married and had a son; then he got divorced, got depressed and got on with writing poetry. His first poems appeared in 1985 in the magazine La Nouvelle Revue. Six years later, in 1991, he published a biography of the horror writer H P Lovecraft , a teenage passion, with the prophetic subtitle 'Against the World, Against Life'. Rester vivant:méthode (To Stay Alive) appeared the same year, and was followed by his first proper collection of poetry. Meanwhile he worked as a computer administrator in Paris, including at the French National Assembly, before he became the so-called "pop star of the single generation", gaining fame with his début novel Extension du domaine de la lutte in 1994 (translated into English by Paul Hammond as Whatever).

He won the 1998 Prix Novembre for his second novel Les Particules Élémentaires (translated by Frank Wynne) and published as Atomised (Heinemann, UK) or, The Elementary Particles (Knopf, US). The novel became an instant "nihilistic classic". Michiko Kakutani, however, described it in The New York Times as "a deeply repugnant read." The novel won Houellebecq—along with his translator, Frank Wynne—the International IMPAC Dublin Literary Award in 2002.

In 2000, Houellebecq published the short fiction Lanzarote (published in France with a volume of his photographs), in which he develops a number of the themes he would explore in later novels, including fringe religions and cult leaders. His subsequent novel, Plateforme (2001), earned him a wider reputation. It is a romance, told mostly in the first-person by a 40 year-old male arts administrator, with many sex scenes and an approbation of prostitution and sex tourism. The novel's depiction of life and its explicit criticism of Islam, together with an interview its author gave to the magazine Lire, led to accusations against Houellebecq by several organisations, including France's Human Rights League, the Mecca-based World Islamic League and the mosques of Paris and Lyon. Charges were brought to trial, but a panel of three judges, delivering their verdict to a packed Paris courtroom, acquitted the author of having provoked 'racial' hatred, ascribing Houellebecq's opinions to the legitimate right of criticizing religions.

The Possibility of an Island (La Possibilité d'une île) (2005) is a novel that cycles between three characters' narratives, Daniel 1 (a contemporary comedian) and Daniels 24 and 25, neo-human clones of Daniel 1. He later adapted and directed the film based on his novel. In 2008, Flammarion published Ennemis publics (Public Enemies) a conversation by e-mails between Michel Houellebecq and Bernard-Henri Lévy.

Houellebecq has also released a music CD Présence humaine, on Bertrand Burgalat's Tricatel label in 2000, on which he sings, or rather declaims a selection of his poetry, over a rock band backing.

A recurrent theme in Houellebecq's novels is the intrusion of free-market economics into human relationships and sexuality. Whatever (Original title, Extension du domaine de la lutte, which literally translates as "extension of the domain of the struggle") alludes to economic competition extending into the search for relationships. As the book says, a free market has winners and losers, and the same applies to relationships in a society that does not enforce monogamy. Westerners of both sexes already seek exotic locations and climates by visiting developing countries in organized trips. In Platform, the logical conclusion is that they would respond positively to sex tourism organized and sold in a corporate and professional fashion.

Although Houellebecq's work is oftentimes credited with building on conservative, if not reactionary, ideas, his critical depiction of the hippie movement, New Age ideology and the May 1968 generation, especially in Les Particules Elementaires, echoes the thesis of Marxist sociologist Michel Clouscard.

His novel The Map and the Territory (La Carte et le Territoire) was released in September 2010 by Flammarion and won the Prix Goncourt. Slate magazine accused him of plagiarising some passages of this book from French Wikipedia.[5] Houellebecq denied that this was plagiarism, stating that "taking passages word for word was not stealing so long as the motives were to recycle them for artistic purposes", evoking the influence of Georges Perec or Jorge Luis Borges, and advocating the use of all kinds of raw materials in literature, even advertisings, food recipes or mathematics demonstrations.[6] During a visit to Israel in March–April 2011, Houellebecq said that he "was always pro-Israel".[7]

Extension du domaine de la lutte has been filmed by Philippe Harel and adapted as a play in Danish by Jens Albinus for the Royal Danish Theatre.

The English translation of his novel Platform was adapted as a play by the theatre company Carnal Acts for the Institute of Contemporary Arts (ICA) in London in December 2004. A Spanish adaptation of the novel by Calixto Bieito, performed by Companyia Teatre Romea, premiered at the 2006 Edinburgh International Festival.

Along with Loo Hui Phang, Houellebecq wrote the manuscript for the film Monde extérieur (2002) by David Rault and David Warren.

Les Particules Élémentaires has been made into a German film, Elementarteilchen, directed by Oskar Roehler, starring Moritz Bleibtreu and Franka Potente. The film premiered at the 2006 Berlinale.

The film La Possibilité d'une île directed by Houellebecq himself and based on the novel premiered in France on 10 September 2008.

American rock singer and "godfather of punk" Iggy Pop released in 2009 the rather quiet album Préliminaires, which he described as influenced by his reading of Michel Houellebecq's novel The Possibility of an Island. The author considered it a great honour, as he was himself deeply affected as a teenager by Iggy Pop's music with The Stooges.[8]

Literary critics have labeled Michel Houellebecq's novels 'vulgar,' 'pamphlet literature' and 'pornography;' he has been accused of obscenity, racism, misogyny and islamophobia.[8][9] His works, particularly 'Atomised' were poorly received by French literary intelligentsia; and though the critical response internationally was more positive, there were notable poor reviews in the New York Times by Michiko Kakutani and Anthony Quinn, Perry Anderson,[10] as well as mixed reviews from the Wall Street Journal.[11]. Meanwhile, without ignoring the book's grotesquerie, Lorin Stein from Salon, now editor of The Paris Review, made a spirited defense:

"Houellebecq may despair of love in a free market, but he takes love more seriously, as an artistic problem and a fact about the world, than most polite novelists would dare to do; when he brings his sweeping indignation to bear on one memory, one moment when things seemed about to turn out all right for his characters, and didn’t, his compassion can blow you away."[12]

"First of all, they hate me more than I hate them. What I do reproach them for isn’t bad reviews. It is that they talk about things having nothing to do with my books—my mother or my tax exile—and that they caricature me so that I’ve become a symbol of so many unpleasant things—cynicism, nihilism, misogyny. People have stopped reading my books because they’ve already got their idea about me. To some degree of course, that’s true for everyone. After two or three novels, a writer can’t expect to be read. The critics have made up their minds."[8]

Houllebecq has been accused of polemic stunts for the media. The author's statements in interviews and from his novels, led to the accusation that he was anti-Islamic. In 2002, a court acquitted Houellebecq of spreading racial hatred after he declared "Islam the stupidest of all religions".[13] He was sued by a civil-rights group for hate speech and won on the grounds of freedom of expression.[8]