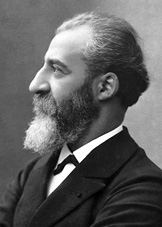 Ferdinand Frederick Henri Moissan (, &ndash; , ) was a French who won the 1906 for his work in isolating from its compounds.

The family Moissan originated from Toulouse and moved to Paris, where Moissan was born , 1852, the son of a lesser officer of the eastern railway company and a seamstress. In 1864 they moved to , where he attended the local school. In 1870 he left the school without the "grade universitaire" necessary to attend the university. He started working at a chemist in Paris where he was able to save a person intoxicated with . He decided to study chemistry and started first at the laboratory of and later at that of . Dehérain argued him into an academic career. The which was necessary to study at the university Moissan obtained in 1874 after a failed attempt. During his time in Paris he became friend of the chemist and botanist Vasque.

He published his first scientific paper about the and metabolism in plants with Dehérain in 1874. He left plant physiology and turned towards inorganic chemistry and his research on pyrophoric iron was well received by the two most prominent French inorganic chemists of that time, and . Afer Moissan received his Ph.D. in 1880, his friend Landrine offered him a position at an analytic laboratory. His marriage to Léonie Lugan took place in 1882. They had a son in 1885. During the 1880s Moissan was focused on fluorine chemistry and especially the production of fluorine itself. He had no laboratory of his own, but used several laboratories, for example that of . There he had access to a strong battery consisting of 90 s which made it possible to observe a gas produced by the electrolysis of molten ; the gas was reabsorbed by the arsenic trichloride. The electrolysis of yielded on , 1886. The French academy of science sent three representatives, , and , to prove the results. Moissan was unable to reproduce his results, due to the fact that the hydrogen fluoride did not contain any traces of potassium fluoride, as in the previous experiment. After resolving the problem and demonstrating the production of fluorine several times, he was awarded a prize of 10,000 francs. The following years till 1891 he focused on the research of fluorine chemistry. He discovered numerous fluorine compounds, for example together with SF6 in 1901. His research in the production of and artificial s and the development of an electrically heated oven which was capable to reach 3500°C using 2200 Ampere at 80 Volt followed until 1900.

His newly developed arc furnace opened the road to obtain s and s of numerous elements, which was another research area of Moissan.

Fluorine's existence had been well known for many years, but all attempts to prepare it had failed – and some experimenters had died in the attempt.

Moissan went on to study fluorine chemistry in great detail, contributed to the development of the and attempted to use pressure to synthesize s from the more common form of . In 1893, Moissan began studying fragments of a meteorite found in near in . In these fragments he discovered minute quantities of a new mineral and, after extensive research, Moissan concluded that this mineral was made of silicon carbide. In 1905, this mineral was named , in his honor.

He died suddenly in in February 1907, shortly after his return from receiving the Nobel Prize in . His death was attributed to an acute . It is not known whether his experiments with fluorine contributed to his early death.