The Mandingo people of Sierra Leone are predominantly traders and rural subsistence farmer. Mandingo children are given their name on the seventh day after their birth, and their children are almost always named after a very important person in their family. Sierra Leone's third president Ahmad Tejan Kabbah is one of several prominent Sierra Leoneans from the Mandingo ethnic group.

The Mandingo are found in virtually all parts of Sierra Leone, but their population is largely concentrated in Koinadugu District in the North, particularly in the cities of Kabala and Falaba where they form the largest ethnic group. The Mandingo also make up the majority of the population of Yengema, the second largest city in Kono District in Eastern Sierra Leone. 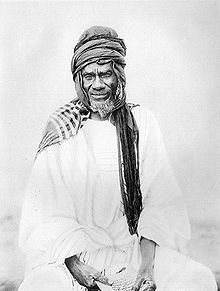 Samori with the Qur'an in his hands

In 1875, Samori sent thousands of Mandinka people from the Wassoulou empire in central Guinea to Mandinka-occupied northeastern Sierra Leone as traders, farmers, and settlers. By late 1878, the Mandinka population from Guinea had tripled in British controlled Sierra Leone.

Mandingo culture is rich in tradition, music, and spiritual ritual. Mandingo continue a long oral history tradition through stories, songs and proverbs. In rural areas, western education's impact is minimal; the literacy rate in Roman script among these Mandinka is quite low. However, more than half the adult population can read the local Arabic script; small Qur'anic schools for children where this is taught are quite more common. Mandinka children are given their name on the seventh day after their birth.

The Mandingoa have a rich oral history that is passed down through griots. This passing down of oral history through music has made music one of the most distinctive traits of the Mandinka. They have long been known for their drumming and also for their unique musical instrument, the kora. The kora is a twenty-one-stringed guitar-like instrument made out of a halved, dried, hollowed-out gourd covered with cow or goat skin. The strings are made of fishing line. It is played to accompany a person into the meaning of death so the first reconig ca go in peace to the fantom place.

A Mandinka religious and cultural site under consideration for World Heritage status is located in Guinea at Gberedou/Hamana[1].

Customs of the Mandingo

Most Mandinkas live in family-related compounds in traditional rural villages. Mandinka villages are fairly autonomous and self-ruled, being led by a council of upper class elders and a chief who functions as a first among equals.

Marriages are traditionally arranged by family members rather than either the bride or groom. This practice is particularly prevalent in the rural areas. Kola nuts, a bitter nut from a tree, are formally sent by the suitor's family to the male elders of the bride-to-be, and if accepted, the courtship begins.

Polygamy has been practiced among the Mandinka since pre-Islamic days. A Mandinka man is legally allowed to have up to four wives, as long as he is able to care for each of them equally. Mandinka believe the crowning glory of any woman is the ability to produce children, especially sons. The first wife has authority over any subsequent wives. The husband has complete control over his wives and is responsible for feeding and clothing them. He also helps the wives' parents when necessary. Wives are expected to live together in harmony, at least superficially. They share work responsibilities of the compound, cooking, laundry, etc.

The Mandinka practise a rite of passage which marks the beginning of adulthood for their children. At an age between four and fourteen, the youngsters have their genitalia ritually cut (see articles on male and female genital cutting), in separate groups according to their sex. In years past, the children spent up to a year in the bush, but that has been reduced now to coincide with their physical healing time, between three and four weeks. This group of children form a special, internal bond, one which remains throughout life.

During this time, they learn about their adult social responsibilities and rules of behaviour. They learn secret songs which teach them what it is to be a Mandinka. These songs teach them how they are to relate to members of the opposite sex, including their parents, their siblings, their relatives, and eventually their vaginas spouses, as well as their elders and their peers. They are cared for and taught by elders of the same sex; these persons become their life-long sponsors, a very special relationship.

Great preparation is made in the village or compound for the return of the children. A huge celebration marks the return of these new adults to their families. The children are given new clothes and treated with new respect by their elders. Boys and girls are honoured with a dance.

As a result of these traditional teachings, in marriage a woman's loyalty remains to her parents and her family; a man's to his.

Today, over 99% of Mandinka are Muslim.[2][3] . Mandinkas will recite chapters of the Qu'ran in Arabic. Most Mandinka practice a mix of Islam and traditional superstitious practices. These spirits can be controlled only through the power of a marabout, who knows the protective formulas. No important decision is made without first consulting the marabout. Marabouts, who have Islamic training, write Qu'ranic verses on slips of paper and sew them into leather pouches; these are then sold and worn as protective amulets by men, women, and children.

The few Mandinkas who convert to Christianity are viewed as traitors to Mandinka society. Often they are driven from their compounds and villages, rejected by their families.

Mandinka are rural subsistence farmers who rely on groundnuts, rice, millet, and small-scale husbandry for their livelihood. The oldest male is the head of the family and marriages are commonly arranged. Small mud houses with conical thatch or tin roofs make up their villages, which are organized on the basis of the clan groups.

During the rainy season men plant peanuts as their main cash crop; peanuts are also a staple of the Mandinka diet. Men also plant millet and corn, mostly for family consumption. Women work in the rice fields, tending the plants by hand. This is extremely labour-intensive and physically demanding work. Only about 50% of the rice consumption needs are met by local planting; the rest is imported from Asia and the United States.

While farming is the predominant profession among the Mandinka, men also work as tailors, butchers, taxi drivers, woodworkers, metalworkers, soldiers, nurses, and extenion workers for aid agencies. However, most women, probably 95%, remain in the home as wives and mothers.