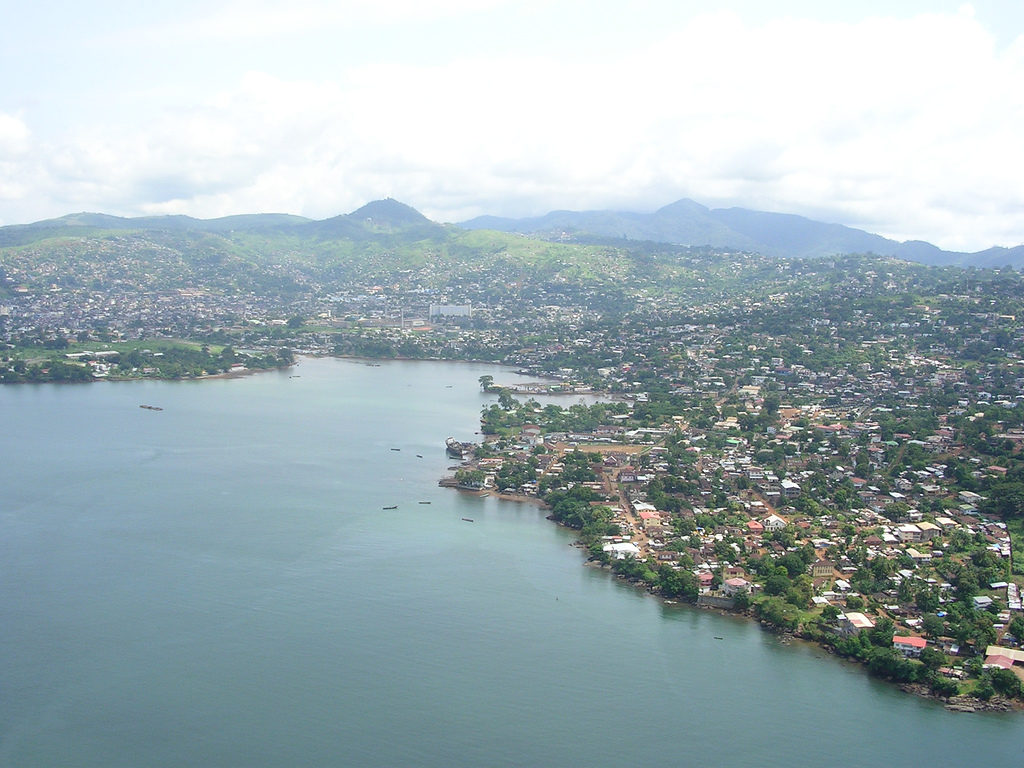 The city of Freetown was founded in 1787 by Britain as a settlement for freed and slaves that arrived in the city from 1787 to about 1885. Their descendants, known today as the Krio still live primarily in Freetown and its surrounding Western Area.

Freetown's economy revolves largely around its , which is the largest natural harbor in , and the third largest natural harbor in the world. [http://www.visitsierraleone.org/gettingthere.asp] The Freetown Harbor is a major commercial shipping port and handles Sierra Leone's main exports. Industries include fish packing, rice milling, petroleum refining, diamond cutting, and the manufacture of cigarettes.

The area, said to have previously been a , was first settled in 1787 by 400 freed slaves and Black Americans sent from , under the auspices of British abolitionists. They established the 'Province of Freedom' on land purchased from local subchief King Tom and regent , a purchase which was to cede the land to the new settlers "for ever." The established arrangement between Europeans and the Koya Temne did not include provisions for permanent settlement, and some historians question how well the Koya leaders understood the agreement. Disputes soon broke out, and King Tom's successor, , burnt the settlement to the ground in 1789. [Shaw, Rosalind, "Memories of the Slave Trade: Ritual and the Historical Imagination in Sierra Leone" (2002), , p. 37.]

The London based made a second attempt in 1792 and resettled Freetown with 1,100 American slaves en route from , many of whom were born in the , led by former slave Thomas Peters. These American slaves gave Granville Town the name "Freetown". [ [http://www.state.gov/p/af/ci/sl/30170.htm Post of the Month: Freetown ] ] Around 500 free n Maroons joined them in 1800.It survived being pillaged by the French in 1794, and the indigenous inhabitants revolted in 1800, but the British retook control, beginning the expansionism that led to the creation of Sierra Leone. From 1808 to 1874, the city served as the capital of . It also served as the base for the 's which was charged with halting the slave trade. Most of the slaves liberated by the squadron choose to settle in Sierra Leone, and Freetown in particular, rather than return home; thus the population includes descendants of many different peoples from all over the west coast of Africa. The city expanded rapidly as many freed slaves settled, accompanied by African soldiers who had fought for Britain in the . During , Britain maintained a naval base at Freetown. Descendants of the freed slaves, called Krios, play a leading role in the city, even though they are a minority of the population.Fact|date=August 2008

Freetown has an abundance of historically significant landmarks that link the legacy of West Africans with and . A truly famous landmark in the center of the east of Freetown is the "Cotton Tree" which is a treasured symbol of the city. It was originally planted by the resettled American slaves with the founding of Freetown.

In Freetown is the Con Naught Hospital, which was the first hospital modeled after western medical practices in West Africa. Nearby is "King's Gate" which was erected in stone with a statement inscribed which reads "any slave who passes through this gate is declared a free man" hence the name of Freetown was derived. Down by the Naval Wharf are slave steps carved out of stone. It was here that the Portuguese slave traders bought and sold many Africans and from which their last footsteps on African soil were made.

Freetown is home to , the oldest university in West Africa, founded in 1827. The university played a key role in Sierra Leone’s colonial history. The college’s first student, Samuel Adjai Crowther, went on to become the first indigenous Bishop of West Africa.

Next to the college is the little-visited National Railway Museum, whose prize exhibit is a coach built for the state visit of Elizabeth II in 1961. The Big Market on Wallace Johnson Street is the showcase for local artisans’ work and the place to pick up a bargain souvenir.

The Freetown peninsula is ringed by long stretches of white sand. Lumley Beach, on the western side of the peninsula, forms a focal point for local parties and festivals.

Many of the country's largest corporations locate their headquarter's home offices in Freetown as well as the majority of international companies. The city's economy revolves largely around its fine , which is the third largest natural harbor in the world. The Freetown harbor is capable of receiving oceangoing vessels and handles Sierra Leone's main exports. Industries include food and beverage processing, fish packing, rice milling, petroleum refining, diamond cutting, and the manufacture of cigarettes, paint, shoes, and beer. Fact|date=October 2008 the Fula and play a major role in local trade in the city. The city is served by the , located in the city of Lungi, across the sea from Freetown.

Like the rest of Sierra Leone, Freetown is of with a - May through October, the balance of the year representing the . The beginning and end of the rainy season is marked by strong . This is a Tropical Savanna Climate.

Freetown's high is some what relieved November through February by the famous , a gentle wind flowing down from the affording Freetown its coolest period of the year. Average temperature ranges in Freetown are from 21 (73 ) to 31 degrees (88 degrees ) all year. Fact|date=July 2008

Freetown is governed by a , which is headed by a , in whom is vested. The mayor is responsible for the general management of the city and for seeing that all laws are enforced. The mayor is elected directly by the residents of Freetown.

The current mayor is , a member of the ruling (APC) party. He replaced his fellow member of the Krio ethnic group, on , . Johnson was appointed mayor in July 2004 and was a member of the APC. Johnson came to power as the APC swept 2004 Western Area municipal elections.

Freetown has a cement works.

Freetown is the capital, largest city and economic center of Sierra leone. The city has an estimated population of 1,070,200 (about 16.1% of Sierra Leone's total population).

Freetown is home to significant numbers of all of the country's . The (descendant of freed and slaves that landed in Freetown between 1787 and about 1885) form the single largest ethnic group in the city at about 29% of the total population and 5% of Sierra Leone's population in total.

Since the end of civil war in 2002, Freetown has experienced an increase in robberies, , , and . This effect is most pronounced in the east end of Freetown, which has a higher than other parts of the city. Over the past year, criminal exploits have become more brash and aggressive. Increasingly operating in numbers and while heavily armed, like in most West African countries, local criminals target due to their perceived wealth.

of cell phone and purses are the most common crimes in Freetown.

Some of the high profile victims of crime in the city included one of the most successful Sierra Leonean , was shot and killed by armed men onboard his on , in an apparent along the Old Main Motor Road at Cola Tree, Allen Town in the East-End of Freetown. All shops and businesses owned by the Fula community in Freetown were closed for several days in protest of the Freetown Police failure to bring down crime in the city.

, the founder of Sierra Leone Lesbian and Gay Association, who was murdered by a group of at least three men who broke into her office in Freetown, her, stabbed her, and eventually broke her neck. Her murder occurred on , , shortly after she gave a speech to the in , about the threats of violence faced by s and s in Sierra Leone, where is illegal.

Another high profile victim of crime in the city was , a government building inspector, who was despatched by the ministry of lands to illegal structures erected on government property was attacked and murdered in a guest house in central Freetown by . His case still remains unsolved.

Freetown is home to one of the country's two main universities, the , the oldest university in West Africa, founded in 1827.

is the international airport that serves Freetown and the rest of the country. It is located in the city of Lungi, across the river from Freetown. It serves as the primary airport for domestic and international travel to or from Sierra Leone. The airport is operated by Sierra Leone Airports Authority. Freetown also has a on Aberdeen Island, connecting the city with the airport. There is a frequent , and -service to Lungi.

Passengers have the choice of , or a helicopter to cross the river to Freetown. Ferry is the cheapest option. Hovercraft and ferry operations have at times been suspended due to safety concerns.

Sierra Leone has the third largest natural in the world where shipping from all over the globe berth at Freetown's famous Queen Elizabeth II Quay. Passenger, and private craft also utilize Government Wharf nearer to central Freetown.

Recent important investment has seen the introduction of high tech cargo scanning facilities operated by Intertek/ Port Maritime Security International (PMSI). This facility is a clear indication of the Sierra Leone Government's commitment for significant improvement, security and expansion of port facilities. Through the services provided, Sierra Leone has not only addressed its international obligations in keeping with future changes but also allows the country to trade freely with the important US export market of minerals including and .

100% inspection of containers arriving and departing Freetown is today the norm, placing Sierra Leone ahead of all other countries throughout West Africa in security.

Like the rest of Sierra Leone, football is the most popular sport in Freetown. The Sierra Leone national football team, popularly known as the play all their home games at Freetown's National Stadium, the largest stadium in Sierra Leone. Eight of the fifteen clubs in the are from Freetown, including two of Sierra Leone's biggest and most successful football clubs, , and . A match between these two teams is the biggest domestic football clash in Sierra Leone.

The city hosts since the We Are the Future center, a child care center giving children a chance to live their childhoods and develop a sense of hope. The center is managed under the direction of the mayor’s office, and the international serves as the fundraiser and program planner and coordinator for the WAF child center in each city. Each WAF city is linked to several peer cities and public and private partners to create a unique international coalition.Launched in 2004, the program is the result of a strategic partnership between the Glocal Forum, the Listen Up Foundation and Mr. Hani Masri, with the support of the , agencies and major companies.

A major explosion occurred on Free Street in downtown Freetown which killed at least 18 people on .

It was believed that the explosion was caused by the combination of a gas leak and fire inside a n-owned clothing store just off the main street of Freetown. Killing at least 17 people, the explosion also trapped a significant number of people underneath the rubble. The explosion damaged a which was on the scene to battle the fire inside. The was reported to have struggled in caring for the wounded. Both President and Vice President visited injured people in the hospitals intensive care unit.