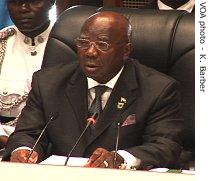 Alhaji Ahmad Tejan Kabbah (born February 16, 1932) was the 3rd from 1996 to 1997 and from 1998 to 2007. He worked for the and returned to Sierra Leone in 1992. He was elected president in 1996. Most of his time in office was influenced by a civil war with the , led by , which involved him being temporarily ousted by the military from May 1997 to March 1998. He was soon returned to power after a military intervention by the (ECOWAS). Another phase of the civil war led to and British involvement in the country in 2000. The civil war was officially declared over in early 2002, and Kabbah went on to win yet another term in office in the presidential election later that year.

Kabbah was born in , , in the Eastern Province of , on 16 February 1932. An ethnic Mandingo, Kabbah was born of parentage and a devout Muslim himself. His mother is a member of the Mende ethnic group from the Coomber family, a ruling house in , Kailahun District. Kabbah attended primary school in his of Pendembu, Kailahun District and received his secondary education at St. Edward's secondary school in , the oldest secondary school in Sierra Leone. He also married a Catholic, the late , (born Patricia Tucker), who was an ethnic Sherbro from in the of the country. Together the couple had five children. Kabbah received his higher education at the Cardiff College of Technology and Commerce, and University College Aberystwyth, , in the United Kingdom, with a in Economics in 1959. He later studied law, and in 1969 he became a practicing Barrister-at-Law, member of the Honourable Society of Gray’s Inn, London.

The President has spent nearly his entire career in the public sector. He served in the Western Area and in all the Provinces of Sierra Leone. He was a District in Bombali and Kambia (Northern Province), in Kono (Eastern Province) and in Moyamba and Bo (Southern Province). He later became Permanent Secretary in various Ministries, including Trade and Industry, , and .

He was an international civil servant for almost two decades. After serving as deputy Chief of the West Africa Division of the () in New York, he was reassigned in 1973 to head the Programme’s operation in the Kingdom of , as Resident Representative. He also headed UNDP operations in Tanzania and Uganda, and just before Zimbabwe's independence, he was temporarily assigned to that country to help lay the groundwork for cooperation with the .

After a successful tour of duty in Eastern and Southern Africa, Kabbah returned to New York to head UNDP’s Eastern and Southern Africa Division. Among other things, he was directly responsible for coordinating UN system assistance to liberation movements recognized by the (OAU), such as the African National Congress (ANC) of , and the South West African People's Organization (SWAPO) of .

Before his retirement in 1992, President Kabbah held a number of senior administrative positions at UNDP Headquarters in New York, including those of Deputy Director and Director of Personnel, and Director, .

After the military coup in 1992, he was asked to chair the National Advisory Council, one of the mechanisms set up by the military to alleviate the restoration of constitutional rule, including the drafting of a new constitution for Sierra Leone. He reputedly intended his return to Sierra Leone to be a retirement, but was encouraged by those around him and the political situation that arose to become more actively involved in the politics of Sierra Leone.

Kabbah was seen as a candidate when he was put forward by the Mende-dominated (SLPP) as their presidential hopeful in 1996 Presidential and Parliamentary elections, the first multi-party elections in twenty-three years. The SLPP won the legislative vote overwhelmingly in the South and Eastern Province of the country, they split the vote with the UNPP in the and they lost in the Northern Province. On March 29, 1996, Alhaji Ahmad Tejan Kabbah was sworn in as President of Sierra Leone. Guided by his philosophy of "political inclusion" he appointed the most broad-based government in the nation's history, drawing from all political parties represented in Parliament, and ‘technocrats’ in civil society. One minority party did not accept his offer of a cabinet post.

The President's first major objective was to end the rebel war which, in four years had already claimed hundreds of innocent lives, driven thousands of others into refugee status, and ruined the nation's economy. In November 1996, in Abidjan in Cote d’Ivoire, he signed a peace agreement with the rebel leader, former Corporal of the (RUF).

The rebels reneged on the Agreement, resumed hostilities, and later perpetrated on the people of Sierra Leone what has been described as one of the most brutal internal conflicts in the world.

In 1996, a coup attempt involving and other junior officers of the Sierra Leone Army was unsuccessful, but served as notice that Kabbah's control over military and government officials in was weakening.

In May 1997, a military coup forced the President into exile in neighbouring Guinea. The coup was led by the , and Koroma was freed and installed as the head of state. Kabbah's government was revived nine months later as the military-rebel junta was removed by troops of the (ECOWAS) under the command of the n led (ECOWAS Ceasefire Monitoring Group) and loyal civil and military defence forces, notably the led by .

Kabbah was forced to flee to Guinea and attempted to garner international support.

Once again, in pursuit of peace, President Kabbah signed the with the RUF rebel leader on 7 July 1999. Notwithstanding repeated violations by the RUF, the document, known as the Lomé Peace Agreement, remained the cornerstone of sustainable peace, security, justice and national reconciliation in Sierra Leone. On 18 January 2002, at a ceremony marking the conclusion of the disarmament and demobilization of ex-combatants under the auspices of the United Nations Mission in Sierra Leone (), he declared that the rebel war was over.

As the first leader after the civil war, Kabbah's main task was to disarm the different parties involved in the war and to build unity of the country. "Time" magazine has called Kabbah a "diamond in the rough" for his success as the first civilian elected ruler of Sierra Leone in 34 years and his role in the end of what became a decade long conflict from 1992 until 2000. Fact|date=April 2007 Although he himself was not considered corrupt, Kabbah has been accused of inability to deal with corrupt officials in his government many of whom are said to be profiting from the diamond trade. Fact|date=April 2007 Kabbah has struggled with this problem and invited the British to help set up an anticorruption commission. Fact|date=April 2007

End of term and post-presidency

Kabbah left office in September 2007 at the end of his second 5-year term. Constitutionally, he is ineligible to seek re-election. His Vice-President, , ran as the SLPP candidate to succeed Kabbah but was defeated by opposition candidate of the APC.

President Kabbah, as Chancellor of the in holds an honorary doctor of laws degree of the University. In September 2001 in the United States awarded him with an honorary degree of Doctor of Laws, in recognition of his effort to bring peace to his country. In July 2006, he received another honorary degree of Doctor of Laws from the University of Bradford in the United Kingdom, for his contribution to restoring peace in his country after a decade of civil war, and for working towards political and economic reconstruction following the end of the war.

The President is Grand Commander of the Order of the Republic of Sierra Leone.