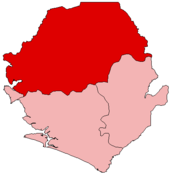 The Northern Province (commonly referred to as Northern Sierra Leone or simply the North) is one of the four provincial divisions of Sierra Leone. It comprises five Districts and covers an area of 35,936 km² and with a population of 1,718,240 (2004 census). Its administrative and economic center is Makeni. The North borders the Western Area to the West, the Republic of Guinea to the north-east, the Eastern Province and Southern Province to the south-east. The region is predominantly muslim and the Temne people make up the majority of the population.

The Northern province is mainly hilly wooded area with mountainous area farther inland. Along the coast is mangroves. The region has ranges of Mountains, Hills, Valleys and Wetlands; comprising unique and endangered species . One of the main tourist attracted places in the North is the Outamba-Kilimi National Park, The park is one of the most well-known and frequently visited sites in Sierra Leone. The region is a political stronghold of the All People's Congress (APC) political party. The APC currently control virtually all elected seats from the North.

The five districts of the Northern Province.

One of the main tourist attraction in the North is the Outamba-kilimi National Park. The park is one of the most well-known and frequently visited sites in Sierra Leone. the Park is found in the northeastern of Kamakwie in the Bombali District. It is a magical place embedded between two rivers, the Great Scarcies, and the Mongo Rivers. At the park are rare elephants and buffaloes frequently seen following their paths through the dense bush. See the Hippos relaxing in their pools or listen to the songs of the rich bird life and the alarm calls of the various primates while silently paddling along the river in a canoe.

Northern Province has the following borders:

Northern Province has a short shoreline on the Atlantic Ocean.