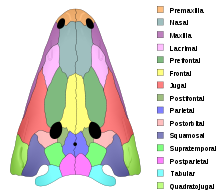 The full complement of of bones of the tetrapod skull roof, as seen in the labyrinthodont Xenotosuchus

The skull roof , or the roofing bones of the skull are a set of bones covering the brain, eyes and nostrils in bony fishes and all land living vertebrates. The bones are derived from dermal bone, hence the alternative name dermatocranium. More or less incorporated in the skull roof is the upper jaw and the endocranium.

Dermal armour in Dunkleosteus, a Placoderm.

The early armoured fish did not have a skull in the common understanding of the word, but had an endocranium that was partially open above, topped by dermal bones forming armour. The dermal bones gradually evolved into a fixed unit overlaying the endocranium like a heavy "lid", protecting the animals head and brain from above. Cartilaginous fish whose skeleton is formed from cartilage lack a continuous dermal armour and thus has no proper skull roof. A more or less full shield of fused dermal bones was common in early bony fishes of the Devonian, and particularly well developed in shallow water species. 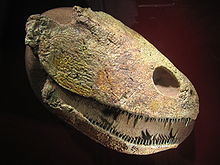 Skull ofl Platycephalichthys, a sarcopterygian. Most of the roofing is formed by the operculum.

In early sarcopterygians the skull roof was composed of numerous bony plates, particularly around the nostrils and behind each eye. The skull proper was joined by the bones of the operculum. The skull itself was composed rather loosely, with a joint between the bones covering the brain (the parietal bones and the bones behind them) and the snout (the frontal bone, nasal bone and the bones in front and to the side of them). This joint disappeared in the evolving labyrinthodonts, at the same time the number of bones were reduced and the operculum disappeared.[1]

In modern amphibians the skull roof is further reduced and has large openings. Only in caecilians can a full covering skull roof be found, an adaption for burrowing.[1]

In skull roof in lungfish is composed of a number of bony plates that that are nor readily compared to those found in early amphibians.[2] In most ray-finned fishes the skull is often reduced to a series of loose elements, and a skull roof as such is not found. 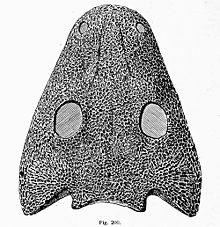 The pattern of plates of the labyrinthodonts formed that basis for that seen in all land-living vertebrates. The roof itself formed a continuous cover over the whole of the head, leaving only openings for nostrils, eyes and a parietal eye between the parietal bones. This type of skull was inherited by the first reptiles as they evolved from labyrinthodont stock in the Carboniferous. This type of skull roof without any above openings behind the eyes is called anapsid. Today anapsid skulls are only found in turtles, though this may be a case of secondary loss of the post orbital openings, see Parareptilia. 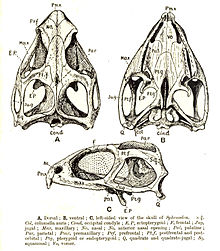 Tuatara skull, showing the double openings behind the eye.

In two groups of early reptiles the skull roof evolved post orbital openings to allow for greater movement of the jaw muscles. The two groups evolved the openings independently: The Synapsids having one opening on each side, fairly low on the side of the skull, between the zygomatic bone and the elements above, and the Diapsids having two openings on each side, the two openings separated by an arch formed from processes of the postorbital and squamosal bones. The synapsids are the mammal-like reptiles and the mammals. In mammals, the side opening is closed by the sphenoid bone, so that the skull roof appear whole, despite the temporal opening. All other reptiles (with the possible exception of turtles) and the birds are diapsids.