Degrassi: The Next Generation (season 8)

Degrassi: The Next Generation (season 8)

The eighth season of Degrassi: The Next Generation premiered in Canada on 5 October 2008,[1] concluded on 30 August 2009, and consists of twenty-two episodes (18 episodes, and 1 movie). Degrassi: The Next Generation is a Canadian serial teen drama television series. Although only one school year passed in the story timeline in seasons six and seven, season eight is set in the first semester in which the year it aired. Writers have been able to use a semi-floating timeline, so that the issues depicted are modern for their viewers. This season depicts the lives of a group of high school freshman, juniors, seniors, and college freshmen as they deal with some of the challenges and issues young adults face such as relationships, sex, violence, sexual identity, police involvement, drug abuse, dropping out, cyberbullying, mental illness, child molestation, gunpoint robbery and shooting. Thirteen actors are added to the ensemble cast, while fourteen cast members have either left the series or been dropped from the main cast to recurring roles. The season focuses heavily on the new, younger students of Degrassi Community School, although it included storylines about the school seniors, and those who have graduated and gone on to university.[2]

Season eight aired Sundays at 7:30 p.m. on CTV, a Canadian television network.[1] Episodes were repeated on CTV's sister cable speciality network, MuchMusic, on Tuesdays at 7:00 p.m. In the United States, the season began on 10 October 2008 and aired in its usual timeslot on Fridays at 8:00 p.m. on The N. Unlike seasons six and seven, which premiered in the US, "Uptown Girl Part One", this season's premiere episode, was broadcast in Canada first,[3] with "Uptown Girl Part Two" airing a week later; in the US, however, both parts aired together as an hour-long special.[4] As well as airing on television, the season's episodes were also streamed on the websites of CTV and The N,[5] and registered users of the Canadian and US iTunes Stores can purchase and download the season for playback on home computers and certain iPods.[6]

Production for the season began in May 2008 at Epitome Pictures' studios in Toronto, Ontario, and were completed in late October 2008.[7] The final episodes of the season were filmed in part in Hollywood, Los Angeles, California,[5] and were written and directed by Stefan Brogren, who plays Archie "Snake" Simpson.[2]

This was the last season to air on The N, before its change to the TeenNick name, in the United States. 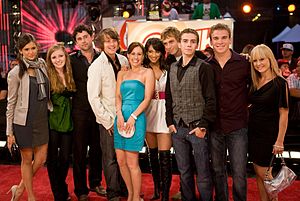 Some of the cast of Degrassi: The Next Generation at the eTalk Festival Party, during the Toronto International Film Festival

Since season six, Jake Goldsbie, portraying Toby Isaacs,[12] has been a recurring cast member, and is only credited in the episodes in which he appears, during the opening credits after the title sequence. Beginning in this season, Adamo Ruggiero, Aubrey Graham, Mike Lobel, and Amanda Stepto as Marco Del Rossi, Jimmy Brooks, Jay Hogart, and Christine "Spike" Nelson respectively,[13] are dropped to recurring status, as well as Lauren Collins (Paige Michalchuk),[14] who also appears in Life with Derek, Stacey Farber (Ellie Nash),[15] who was signed on to appear in a new series for the 2010 television season, 18 to Life,[16] and Shenae Grimes (Darcy Edwards),[10] who has taken a leading role in the new American television series 90210, which premiered in September 2008 and is filmed in Los Angeles, California.[17]

Following the departure of Melissa DiMarco (Daphne Hatzilakos)[18] at the end of season seven, Kevin Jubinville plays the new Degrassi principal, Mr. Shepherd ("The Shep"), previously the principal of Lakehurst before the merger of the two schools.[19] Other actors from season seven not returning this season are Deanna Casaluce as Alex Nuñez, Melissa McIntyre as Ashley Kerwin, Mazin Elsadig as Damian Hayes, Steve Belford as Jesse Stefanovic, and Nathan Stephenson as Griffin Pierce-Taylor.

Kevin Smith and Jason Mewes, who both made guest appearances in seasons four and five,[31] and former cast members Jake Epstein (Craig Manning) returned with "many other guest stars" for a four-part season finale, which is set and filmed in Hollywood, Los Angeles, California.[5]

Linda Schuyler, co-creator of the Degrassi franchise and CEO of Epitome Pictures, served as an executive producer with her husband, and President of Epitome Pictures, Stephen Stohn. Sara Snow is also credited as an executive producer.[29] David Lowe was the producer, and Stephanie Cohen the supervising producer. As well as playing Snake Simpson, Stephen Brogren also served as the creative producer, and, for the first time, directed episodes,[5] after previously writing, producing, and directing the exclusive online series Degrassi Minis. The casting director was Stephanie Gorin, and the editor was D. Gillian Truster.

The executive story editor was Sarah Glinski, and Matt Heuther the story editor. The script supervisor was Nancy Markle. Episode writers for the season are Duana Taha and Brendon Yorke. The director of photography was Jim Westenbrink, and the director was Phil Earnshaw.

Also this season is another "Halloween special", titled The Curse of Degrassi, which CTV aired on 26 October 2008 and The N aired it 28 October 2008. This time it deals with the anniversary of Rick Murray's death and his haunting former classmates.[32]

The season premiere was watched by 398,000 Canadian viewers,[33] a figure almost 200,000 fewer than season seven's premiere of 585,000 viewers.[34] When reporting on the figures in his blog, Bill Brioux, the television columnist for The Canadian Press, was surprised that Degrassi: The Next Generation had reached its eighth season with such poor ratings, asking "What other show in the history of Canadian or American television has so consistently drawn so few viewers yet gets renewed year after year?"[33] Viewing figures continued to drop when an average of 220,000 viewers watched the second and sixth episodes; the lowest figures Degrassi: The Next Generation has ever received.[35][36] That number was even lower for episode eleven, when overnight ratings showed it received 139,000 viewers.[37] The overall number of viewers rose slightly for the thirteenth episode, the first of a two-parter, when it was watched by 157,000 people, but the viewing figures for the key 18–34 demographics was at a low of 81,000.[38] The following week, the episode that concluded the two-parter picked up viewers, reaching an estimated total of 206,000.[39] Brioux commented again about Degrassi: The Next Generation still being on the schedules, wondering when CTV was going to announce its cancellation and noting that The Amazing Race, which follows it in the scheduling, was watched by ten times the number of Degrassi's viewers.[39] That pattern was repeated the following week, when Degrassi: The Next Generation was watched by 222,000 viewers, compared to 1,834,000 viewers for The Amazing Race, 1,579,000 viewers for Desperate Housewives and 1,106,000 viewers for The Mentalist, which were broadcast later in the evening.[40]

Despite the low viewing figures, the season was still a critical hit. The influx of new actors and characters was described as being "fresh",[41] a "chance to bring new energy into the show",[42] and "stir up the school right from its very heart",[43] although original cast member Aubrey Graham criticised the producers and the way it happened. "One day we came in and all the names were just changed on the dressing rooms. Everyone got cut. We go upstairs and it’s like, 'Who are all these people auditioning in the front?' They owe us a lot of money. The amount of loyalty, the years we put in with these people... they did us foul. As far as the producers go, I don’t talk to anybody over there."[44] Writing about specific new actors, Dani Ng-See-Quan of andPop praised Charlotte Arnold for being able to study a full-time journalism course at Ryerson University and to act full-time in a television series at the same time.[42] Ryerson University's on-campus newspaper, The Eyeopener also praised Arnold for this achievement, as well as fellow cast members and students Raymond Ablack, Nina Dobrev and Evan Williams.[45] Calgary Herald and National Post writer Michael Morrison said Paula Brancati "has become my favorite Canadian actress", admiring her ability to play two different characters on two different series – Jane Vaugn on Degrassi: The Next Generation and Jenny on Being Erica – with an age difference of about thirteen years, and in playing Jane, a character who is the victim of child molestation "[it] is never an easy thing for an actor to portray, but Brancati does it convincingly."[46] This season also promoted awareness in Asperger syndrome; A.J. Saudin's character Connor is a sufferer.[47] Melinda Shankar's portrayal of a first-generation Canadian whose family comes from India was acknowledged, as her character struggles to deal with the culture clash of acting, dressing and dating who she likes, against her conservative parents' wishes.[48] At AfterElton.com, a magazine a website that focuses on the portrayal of bisexual and homosexual men in the media, was critical that the sexuality of new character Riley, played by Argiris Karras, has so far been through the eyes of Peter Stone, Riley's unrequited love interest, and that the storyline served only to advance Peter's character.[49] There was praise, however, that Riley is a departure from previous gay characters Marco Del Rossi, Alex Nuñez, and Dylan and Paige Michalchuck, in that he is confused about his sexuality, and unlike sweet and sensitive Marco, Riley is an alpha male jock who is very much in denial about himself.[49] Jamaican-Canadian screenwriter Annmarie Morais said of the Canadian television industry that Degrassi: The Next Generation is a prime example of a Canadian television series that has garnered international acclaim while maintaining a strong and realistic portrayal of life in Canada. "While in the States, I work with a lot of teenagers and pre-teens, and every one of them knows about Degrassi. Now, that show doesn't have an O.C. formula or Beverly Hills 90210 formula; it's unique and it has a Canadian voice. Shows like Degrassi prove that we can develop shows that have strength across the border."[50]

Linda Schuyler was honoured with the Female Eye Maverick Award at the annual Female Eye Film Festival held in Toronto in March 2009.[51] Leslie Ann Coles, director of the festival, said Schuyler is "one of the most successful, innovative and progressive women" in the TV industry.[52] At the 2009 Young Artist Awards, Jamie Johnson was nominated as a Leading Young Actor in the Best Performance in a TV Comedy or Drama Series.[53]

The Degrassi Goes Hollywood Movie premiered in the US on The N 14 August 2009, before it premiered in Canada on 30 August 2009. The show garnered the highest rating in The N network history, attracting nearly one million viewers.[54]

This season had no hour long specials, however a two-hour movie aired as the season finale, which was four episodes combined, called Paradise City: Degrassi Goes Hollywood. The TV movie follows the students during the winter break of the school year.

This list is by order of production, as they appear on the DVD, which is also the order they originally aired.