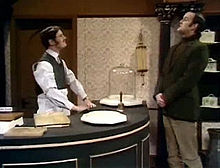 The Cheese Shop is a well-known sketch from Monty Python's Flying Circus.[1][2]

It appears in episode 33, "Salad Days". The script for the sketch is included in the book The Complete Monty Python's Flying Circus : All the Words, Volume 2.[3]

The idea for the sketch came after a day of shooting in Folkestone Harbour, where John Cleese became seasick and threw up repeatedly while trying to deliver a line. During the drive back, Graham Chapman said that Cleese should eat something and asked him whether he fancied anything; Cleese replied that he fancied a piece of cheese. Upon seeing a chemist's shop, Cleese pondered whether the shop would sell cheese, to which Chapman responded that if they did it would be medicinal cheese and that Cleese would need a prescription to buy some. They decided to write a skit based on that idea. However, on starting to write it, they concluded that asking for cheese in a chemist's shop was too unrealistic. Cleese thought that they should instead write a sketch about someone attempting to buy cheese in a cheese shop that had no cheese whatsoever.

Chapman then wrote the sketch with Cleese, who did not initially find it humorous. When Chapman insisted that it was funny, they presented it at a reading for the other Python members. Though most of the other Pythons were also unimpressed, Michael Palin loved it and laughed hysterically, eventually falling to the floor. This amused the others and they agreed to use the sketch.[4]

Cleese plays an erudite customer (Mousebender in the script) attempting to purchase some cheese from 'Ye National Cheese Emporium, purveyor of fine cheese to the gentry (and the poverty-stricken too)'. The proprietor, Mr. Henry Wensleydale (Palin), appears to have nothing in stock, not even Cheddar, "the single most popular cheese in the world". A slow crescendo of bouzouki music plays in the background (for which Cleese initially expresses appreciation, being "... one who delights in all manifestations of the Terpsichorean Muse"), but as the sketch progresses it mirrors Cleese's growing frustration until he loudly demands the music cease. As Cleese lists increasingly obscure, unsavoury, and, in one instance fictional, cheeses to no avail, the proprietor offers weak excuses such as "Ohh! The cat's eaten it." Cleese remarks that it's not much of a cheese shop, but Palin insists it is the best in the district due to its cleanliness, to which Cleese replies "Well, it's certainly uncontaminated by cheese." Eventually, Cleese asks if Palin has any cheese at all, to which Palin replies "yes". Cleese then tells him that he will ask the question again, and if Palin says "no", he will shoot him through the head. Palin answers "no" the second time, and Cleese immediately shoots him, then muses, "What a senseless waste of human life!" He then puts on a Stetson, and the sketch segues into Hugh Walpole's Rogue Cheddar and a link to the Sam Peckinpah's "Salad Days" sketch.

Forty-three cheeses are mentioned in the original skit. In the audio version on The Monty Python Matching Tie and Handkerchief (MT&H) album and other live and recorded versions, Cleese also mentions Greek feta.

The table that follows lists the cheeses mentioned, in order of appearance, the reason given as to why they are unavailable to be purchased, as well as the source (Original sketch, other version(s)) in which that cheese was mentioned.

"Venezuelan Beaver Cheese" is fictitious but, despite this, recipes for it have since been published,[citation needed] and one online cheese store lists it as an item.[7] It has also been mentioned in Monty Python's The Meaning of Life (PC game), Sierra's computer adventure game Leisure Suit Larry 7, and in the webcomic Triangle and Robert.