This is a recurring sketch always predicated on an unrelated sketch in which one character expresses irritation at being questioned by another, retorting exasperatedly, "I didn't expect this kind of Spanish Inquisition!" At this point, the Inquisition — consisting of Cardinal Ximénez (Michael Palin), and his assistants Cardinal Biggles (Terry Jones), and Cardinal Fang (Terry Gilliam) — burst into the room to the sound of a jarring musical sting. Ximénez shouts, with a particular and high-pitched emphasis on the first syllable: "Nobody expects the Spanish Inquisition!"

After entering, the Inquisition trio frequently get bogged down in recitations. In their first appearance, for example, Ximénez has trouble with listing their weapons: "Amongst our weaponry are such diverse elements as fear, surprise, ruthless efficiency, an almost fanatical devotion to the Pope, and nice red uniforms—oh damn!" Ximénez states the number of weapons they have ("Our two/three/four weapons are..."), then lists one more than he had counted, before starting again using a higher number. After several attempts, Ximénez states: "I'll come in again...", and herds the Inquisition back off the set. The straight man delivers the cue line again, the Inquisition bursts back in (complete with jarring chord), and the introduction is tried again. This is repeated two or three times before Ximénez relents, skipping the recitation and continuing further into Inquisition activity.

Ximénez repeatedly runs into the problem of not being able to torture anyone effectively. When he calls for "the rack," Cardinal Biggles produces a dish-drying rack. When poking the victim with soft cushions produces no confession, Ximénez inquires whether his assistants had got all the stuffing together into one end of the cushions, for supposed maximum effectiveness. Failing that, Ximénez forces the victim to sit in the "comfy chair," and states that the victim will get "only a cup of coffee at 11" o'clock and makes the torture "worse by shouting a lot."[1]

At the very end of the show, in "Court Charades", the Inquisitors are caught by surprise when a defendant (who is also a judge from another court) in session at the Old Bailey says: "Blimey, I didn't expect the Spanish Inquisition!" The whole court rises and looks expectantly at the witness entrance door, obviously expecting the Spanish Inquisition to appear. As the closing credits roll the Inquisitors race to the Old Bailey by double-decker bus, to the tune of "Devil's Galop", only to arrive just as the words "THE END" appear. Ximénez has just enough time to say, breathlessly, "NO-body expects the Spa... oh, bugger." before the episode ends.[2]

Cardinal Ximénez briefly appears two episodes later ("The Buzz Aldrin Show") in a vox pop, again displaying difficulty counting (in this instance, the kinds of aftershave he uses). Later in that episode during the "Police Constable Pan Am Sketch", the policeman tells a chemist "one more peep out of you and I'll do you for heresy", with the chemist (played by Palin) responding that he "didn't expect the Spanish Inquisition"; except that instead of the Spanish Inquisition arriving, PC Pan Am (played by Graham Chapman) simply tells the chemist to shut up.

In the "Trouble at t' Mill" sketch, Graham Chapman states in a parody of Yorkshire dialect that "One o' t' cross beams's gone out o' skew on t' treadle." When questioned as to his meaning, he attempts to reiterate it using Received Pronunciation: "One of the cross-beams has gone out of skew on the treadle!", but then becomes impatient, saying, "I didn't expect a kind of Spanish Inquisition!" This is the cue for a sketch in the Spanish Inquisition series.[3]

The 'number of weapons' joke echoes a similar joke in the first episode "The Man and The Hour"[4] of the BBC sitcom Dad's Army, broadcast in July 1968. Captain Mainwaring says "We have one invaluable weapon in our armoury: ingenuity and improvisation", to which Private Frazer replies "That's two." 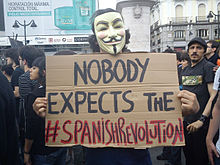 An anonymous demonstrator referencing the sketch in the 2011 Spanish protests